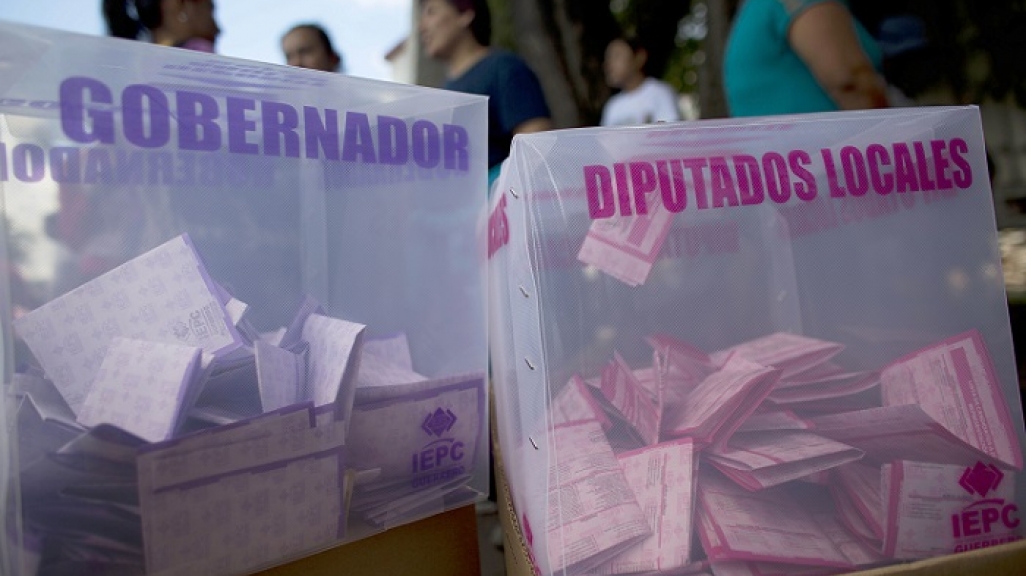 Nearly a third of states will pick new governors. (AP)

The governing PRI could lose all nine races, but it’s not the only party at risk. Here’s why these seats matter, along with potential victors ahead of July 1.

Most of Mexico’s electoral fervor is focused on the top seat in the land—the presidency. But that doesn’t mean there aren’t other highly coveted posts up for grabs: nearly a third of Mexican states will select new governors to single, six-year terms on July 1. And perhaps no other posts better exemplify voters’ frustration with corruption.

Back when the Institutional Revolutionary Party (PRI) ran the country for more than seven decades straight, governors were deferential to the presidency. Since that period ended in 2000, they’ve become increasingly powerful, thanks to near-unfettered access to public funds, which many of them exploit. Across the country—from the border states of Chihuahua and Tamaulipas to the Gulf Coast’s Veracruz to the tourism paradise of Quintana Roo—several governors ransacked state coffers and ran for the hills in recent years. Some 14 current or ex-governors are under investigation.

Although corruption extends beyond any one political party, many of these scandals involve the PRI, meaning they play a factor in the weak approval ratings of President Enrique Peña Nieto and the fact that PRI presidential candidate José Antonio Meade generally polls third. The party already took a hit in 2016 during the last big round of gubernatorial elections, when it lost six of the nine governorships it held.

But while many speculate as to how much more ground the PRI will lose in this gubernatorial round, it’s not the only party that stands to lose. The left-leaning Party of the Democratic Revolution (PRD) experienced high-stakes defections when current presidential frontrunner Andrés Manuel López Obrador, or AMLO, exited the party to start his own, the National Regeneration Movement (MORENA). The PRD holds three of the nine seats up for election and could find itself handing over the crown jewel, Mexico City, for the first time in more than 20 years. Overall, MORENA, which holds none of the country’s 32 governorships at the moment, appears well-placed to win at least four this time around.

From family members to a fútbol star, here’s a look at the candidates and competitions to govern eight states (Chiapas, Guanajuato, Jalisco, Morelos, Puebla, Tabasco, Veracruz, and Yucatán) and Mexico City.

The race to run the capital

Mexico City isn’t technically selecting a governor but rather a head of government, which is translated as “mayor” in English. The winner of the 2018 competition will be the first elected since the February 2017 implementation of a new constitution that saw the capital change from being referred to as the Distrito Federal to the Ciudad de México (CDMX) and involves a title change for those who run the various sections (delegations) of the city from head of delegation to mayor.

AMLO is a former Mexico City mayor. The post of head of government in the megalopolis, which has just over 7.5 million eligible voters, is considered one of the most important political offices in the country. The capital has been a PRD stronghold for years, but MORENA began chipping away at its grip when it won leadership of five of the city’s 16 delegations, including the important downtown seat of Cuauhtémoc, during the 2015 midterms.

Miguel Ángel Mancera stepped down from running the city in April to join the presidential campaign of Ricardo Anaya of the National Action Party (PAN), who leads a left-right coalition known as Forward for Mexico. Mancera left office amid a growing crime wave and with the lowest approval rating of anyone to hold Mexico City’s mayoralty since the PRD started governing the capital. His former education secretary and the PRD’s former party president, Alejandra Barrales, trails MORENA’s Claudia Sheinbaum in the race for the CDMX seat.

A physicist and former environmental secretary in AMLO’s government, Sheinbaum also polls well ahead of the PRI’s Mikel Arriola, who previously ran Mexico’s social security system and has taken a conservative stance in the progressive capital on issues like adoption by same-sex couples and marijuana legalization. But even if Sheinbaum is the one to beat, she’s not without controversies, particularly over the handling of a fatal, earthquake-related school collapse in the delegation she governed.

Conclusion: MORENA’s candidate is the one to beat.

Chiapas: The state on Mexico’s southern border is currently led by Manuel Velasco of the PRI-allied Green Party (PVEM). Although it’s not PRI-governed, to some degree it’s the PRI’s to lose. There’s no PVEM candidate in the running and Velasco—grandson of an ex-governor, the youngest governor in Chiapas’ history, and husband to Mexican celebrity Anahí—publicly endorsed Meade. An April El Universal poll gave MORENA’s coalition candidate Rutilio Escandón 39 percent of voter preference, 16 points over the PRI’s Roberto Albores Gleason, who represents a coalition that includes the PVEM. Pollster Consulta Mitofsky gives Escandón a smaller advantage.

Conclusion: MORENA could pick this one up.

Guanajuato: The PAN’s Vicente Fox, more recently famous for his anti-Donald Trump videos, governed this central state from 1995 until he became the first politician to break the PRI’s presidential grip in 2000. For years, the PAN’s gubernatorial hold on Guanajuato was a sure thing. That nearly came to an end the last time around in 2012, the same year that the presidency reverted back into the hands of the PRI, when the state’s PAN candidate won with just 0.6 percent of the vote. But, if one is to trust the polls, the days of doubt may be done. A March El Financiero poll gave Diego Sinhué Rodríguez of the PAN alliance a hefty 30-point lead over the PRI coalition candidate, Gerardo Sánchez. A TAG poll released at the end of April also gives Rodríguez a formidable poll lead, but puts MORENA alliance’s Ricardo Sheffield, previously of the PAN, a hair ahead of and in a technical tie with Sánchez.

Conclusion: Guanajuato is the PAN’s to win.

Jalisco: With an electorate bordering on 6 million voters, the western state is the biggest prize up for grabs aside from the capital. It’s also been one that’s gone back and forth between the PAN and PRI, and is currently governed by the latter’s Aristóteles Sandoval. But neither party polls ahead in the state. Instead, Enrique Alfaro, on leave from his job as Guadalajara mayor, of a smaller party known as the Citizen’s Movement (MC) is the frontrunner, although some polls still give the PRI’s Miguel Castro Reynosa and MORENA’s Carlos Lomelí a fighting chance.

Jalisco stands out for the fact that there is no PAN-PRD-MC alliance, which exists in other races, thereby allowing the MC to pick up a seat on its own.

Conclusion: This is the state with the biggest chance of going to a smaller party.

Morelos: Currently governed by the PRD, Morelos is a key race, given that the state borders Mexico City. But it’s also a much-watched competition because former soccer star Cuauhtémoc Blanco, who played for Mexico’s national team in three World Cups, holds a solid lead as the coalition candidate for MORENA as he runs on an anti-corruption pledge. In April, El Universal put him more than 22 points ahead of the PAN’s Victor Solano. The PRD’s Rodrigo Gayosso, stepson of the current governor, polls well behind.

But controversy has chased Blanco—on leave from the mayoralty of Cuernavaca and often referred to simply as “Cuauh”—who faces investigations into whether he broke electoral laws staged a hunger strike over a possible impeachment, and has been accused of ordering the assassination of a business leader. His fame both hurts and helps him; he has both the highest favorable and unfavorable ratings of the candidates, and he’s the most well-known.

Conclusion: This is MORENA’s to win.

Puebla: The PAN ended the PRI’s decades of power in Puebla when Rafael Moreno Valle, grandson of an ex-governor, won in 2011. His name was also floated as a potential presidential contender last year. After a brief governorship by another panista, José Antonio Gali Fayad, poblanos will turn out to vote again in an election that brings the state’s gubernatorial race in line with the federal elections. Moreno Valle’s wife, Martha Erika Alonso, is hoping to keep the governorship in the family as a PAN coalition candidate. But polls put her in a close battle with Senator Miguel Barbosa, a PRD defector who joined MORENA and is running as its alliance candidate. The PRI candidate Enrique Doger polls third.

Conclusion: The PAN has an edge, but MORENA’s in the running.

Tabasco: The southern state of Tabasco may be one of the smaller ones competing, but given that it’s where the presidential frontrunner calls home, the AMLO effect is in action. Massive Caller polls give MORENA’s coalition candidate Adán Augusto López Hernández at least a 2-to-1 lead over Gerardo Gaudiano, a member of the PRD who’s running as part of that party’s alliance with the PAN and MC.

Conclusion: The PRD will likely give way to a MORENA victory.

Veracruz: One could make the case that no other state holding a gubernatorial race in 2018 has been dogged by as many corruption-related headlines, as has Veracruz. Former PRI governor Javier Duarte, thought to have robbed billions of dollars from the state during his 2010–2016 tenure, eventually went on the lam for six months, during which time authorities captured his fake passport wherein he donned a fake moustache, thereby launching dozens of memes. He was eventually detained in Guatemala and extradited to Mexico, where he sits in prison awaiting trial.

Tragically, Duarte left Veracruz poorer and more violent, with increases in homicides, disappearances, and mass graves. For the first time, the PRI lost the governorship in 2016 and doesn’t look like a safe bet this year, either; the PRI candidate, José Yunes Zorrilla polls third. He has no blood relation with Miguel Ángel Yunes Márquez of the PAN’s coalition, one of the poll leaders. However, Yunes Márquez is the son of the current governor, Miguel Ángel Yunes Linares. (If that’s not confusing enough, Yunes Linares beat his own cousin in 2016 and that cousin is now backing Yunes Zorrilla.)

Yuneses aside, the candidate with the best hope of defeating the governor’s son appears to be Cuitláhuac García of the MORENA coalition, with one poll putting the two in a technical tie and another putting García six points behind. García also ran in 2016 and finished third.

Conclusion: It’s a close race between the PAN and MORENA.

Yucatán: At a little more than 1.5 million voters, Yucatán state has the smallest electorate of the states selecting new governors. It’s also one of the only states where the PRI, which currently governs the state, has a good chance of winning. Two polls gave the lead to the PAN’s Mauricio Vila Dosal, allied with MC, and a third one released just before campaigns began places the PRI coalition’s Mauricio Sahuí Rivero five points ahead.