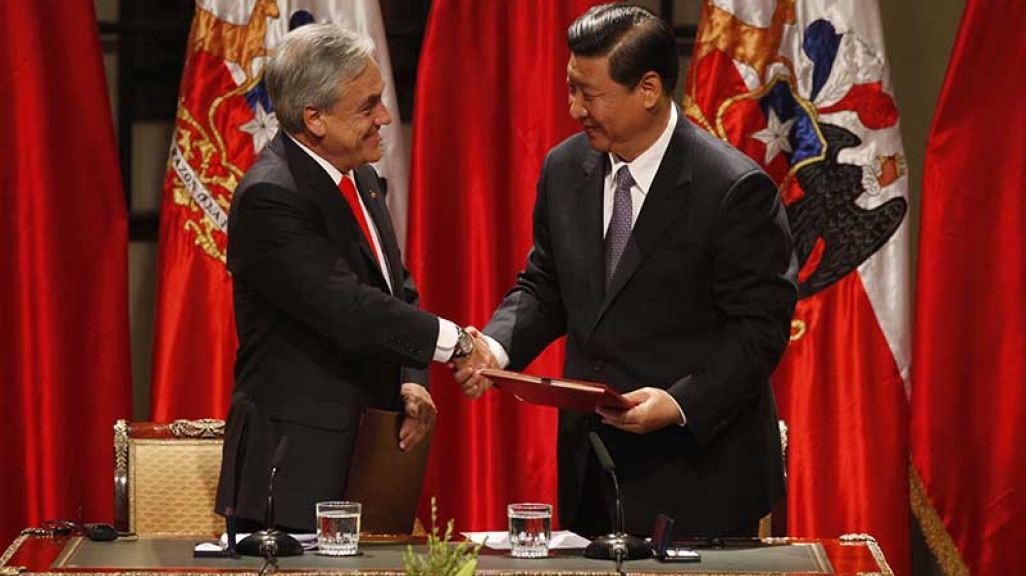 China is the top commercial partner for Brazil, Chile, Peru, and Uruguay, and the U.S. trade dispute is further binding those ties.

The United States keeps losing ground to China in Latin America—and quickly at that. This year alone, Bolivia, Chile, Uruguay, and Venezuela all joined China’s $1 trillion investment initiative known as Belt and Road. China’s plans to finance billions in infrastructure across the region will update pathways and supply chains that facilitate Sino-Latin American trade. The Asian giant has already supplanted the United States as the top trade partner for Brazil, Chile, and Peru. Beijing also surpassed Brazil as Uruguay’s top trading partner and is the main importer for another handful of countries from the region. And, amid a U.S.-China trade dispute over tariffs, Latin Americans are reaching across the Pacific, opening up opportunities to trade more with Beijing as U.S. products become more expensive.

With trade tensions on display during the G20 in Argentina, we take a look at the region’s countries that have chosen trade ties with Beijing over Washington.

China ventured into establishing economic ties with Brazil in 1993 when the two countries established the first strategic partnership in Latin America. Trade between the countries has gone from under $1 billion a quarter-century ago to $76 billion in goods in 2017.

On Brazil’s end, the idea of the agreement was to diversify its commercial partners and reduce reliance on the United States. Sixteen years into the partnership, China challenged the United States’ 80-year hegemony as Brazil’s primary trading partner when, in 2009, Brasilia’s total trade with Beijing for the first time surpassed trade with Washington. The financial crisis saw U.S. exports to the South American country slashed by 43 percent from 2008 to 2009, making more room for Chinese products in the Brazilian market. But it wasn’t until 2012 that Brazil also started selling more to China than it did to the United States.

As such, China is Brazil’s single largest trading partner on all fronts—and one that consistently delivers a trade surplus for Brazil. In 2017, China was responsible for 33.2 percent of Brazil’s $22.3 billion surplus on all foreign goods traded.

The relationship is getting a boost this year as the U.S. trade dispute pushes China to buy even more soybeans from the world’s top exporter of the legume. The U.S. Department of Agriculture forecasts China will buy 20 percent fewer soybeans this year than it did in 2017, and Beijing’s purchases of Brazilian soybeans are already up 15 percent January–August 2018 compared to the same period last year.

Chile and China ties are among the most well established in the region, with diplomatic relations beginning in 1970. Commercial ties kicked off with Beijing and Santiago’s free-trade agreement (FTA) signed in 2005—China’s first in Latin America and with any individual country worldwide. Since then, the back-to-back administrations of Presidents Michelle Bachelet and Sebastián Piñera strengthened ties, removing more trade barriers on Chilean services and Chinese automobiles, as well as promoting tourism on both sides of the Pacific. From 2005 to 2017, the value of total trade grew by 325 percent, with China officially overtaking the United States for the top spot as Chile’s main importer and export destination in 2014. In November of this year, during Foreign Minister Roberto Ampuero’s trip to Beijing, Chile became the fourth Latin American country to join China’s Belt and Road.

China’s trade ties with Chile have long centered on mineral commodities. The world’s largest copper consumer buys from the world’s largest copper producer; close to 80 percent of Chile’s exports to China are some form of copper. But China’s economic slowdown coupled with the U.S. trade war is dampening Chile’s copper prospects, weakening copper’s price and cutting Chinese imports. On the other hand, Chile’s Finance Minister Felipe Larraín says the trade dispute could present an opportunity to boost Chile’s agricultural exports to China.

Peru is one of three Latin American countries that has an FTA with China, the other two being Chile and Costa Rica. Like Chile, commercial ties are concentrated in copper, with Chinese companies investing more than $10 billion in Peru’s mining sector from 2017 to 2018, making Beijing Peru’s biggest source of FDI. Last year, 88 percent of Peru’s exports to China were minerals.

Overall, two-way trade since the 2010 FTA has doubled and is nine times more than it was in 2005, when the countries launched a comprehensive strategic partnership. China officially replaced the United States as Peru’s top trading partner for both imports and exports in 2014.

It’s been a productive year for Uruguay in its agenda to foster ties with China. In June, Uruguay expanded its consulate in Shanghai to staff twice the number of personnel as before, and inaugurated a new consulate in Canton in August. The South American country also celebrated 30 years of diplomatic relations with Beijing with a week of activities overseas promoting trade, investment, and tourism between the two countries. Stopping by Beijing on August 20, Uruguayan Chancellor Nin Novoa also signed a memorandum of understanding incorporating the country into Belt and Road.

President Tabaré Vázquez, who visited Beijing at the beginning of the year, made closer China relations an objective of his administration, including a potential FTA that’s either bilateral or agreed to via Mercosur. In the meantime, Uruguay is already benefiting from a strategic partnership Vázquez signed in 2016. Last year, two-way trade rose 31 percent, while trade in the first half of 2018 is already 24 percent higher than it was during the same period in 2017. Uruguay’s main export to its Asian partner is meat, but farmers note it could also be a source for soybeans amid the U.S.-China trade dispute.