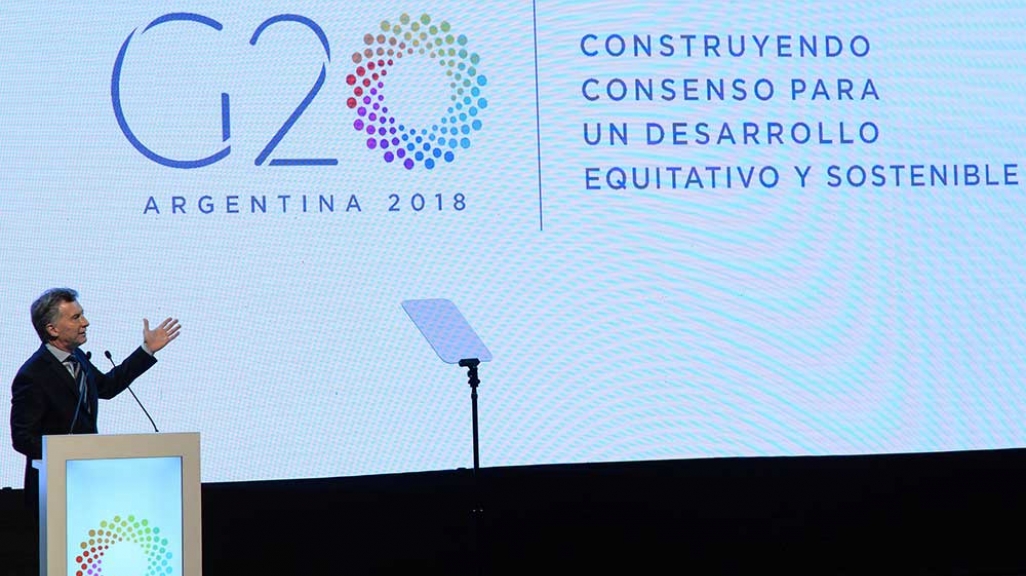 What to Expect from Argentina's G20

Argentina will be the first South American country to host the Leaders’ Summit, as well as the first Latin American one to host U.S. President Donald Trump.

On November 30, Argentina will become the first South American country to host the G20 Leaders’ Summit. President Mauricio Macri has the opportunity to bring a Southern Cone perspective to the global forum this year, although he won’t be getting all the limelight. Argentina will be the site to other important meetings taking place at the November 30–December 1 Summit, as well as be the first Latin American country to receive U.S. President Donald Trump.

Below we look at Argentina’s role hosting the G20 Leaders’ Summit and the meetings taking place on the sideline to sign the new NAFTA and tackle the U.S.-China trade war.

Playing host to the Summit is an opportunity for Argentina and Latin America overall. “At the center of the G20, we’ll place the concerns and aspirations of this developing region that is anxious for new opportunities,” Macri said when he announced Argentina would take over the G20 presidency. “We will show that we can take part in the international conversation.”

For Argentina, one of three Latin American members in the body, hosting the year-long event is a chance to open up further to the global economy—one of the Macri administration’s priorities from the start of his government. But with anti-globalist sentiment on the rise worldwide, Argentina finds itself in a strange place to promote multilateralism and international trade. Thirsty to participate in the global economy after years of protectionist policies under the Kirchner presidencies, Argentina has been reducing trade barriers and promoting commercial ties. The results have been mixed, however, with the currency losing nearly half of its value from January to August this year, while GDP is expected to shrink by 2.4 percent, according to the government.

The other two Latin American G20 members, Brazil and Mexico, are also suffering ups and downs. By mid-2018, J.P. Morgan slashed Brazil’s GDP growth forecast from 2.8 to 1.2 percent for the year, before Jair Bolsonaro’s electoral victory made the Southern Cone country’s stock index the best performing among global markets. For Mexico, the IMF highlights the country’s “resilience” amid election uncertainty and NAFTA renegotiations, yet Mexican stocks and the peso took a hit following decisions of the new Congress and incoming president. Macri invited Chile to participate in the G20 before the country’s elections took place last year, and its new President Sebastián Piñera is indeed planning to attend the Leaders’ Summit. Chile’s economy has picked up steam after the business-friendly president took power in March and is projected to expand GDP by 4 percent in 2018.

Argentina is the first country to make development a focus of the G20 agenda, with topics to be discussed to center around the future of work, infrastructure for development, and a sustainable food future—priorities the Argentina government set based on consultations with other Latin American countries. With 60 percent of roads unpaved, the region is in great need of basic infrastructure, but concerns also exist about technology-related infrastructure to boost internet connectivity.

Nearly two years into his term, Trump’s attendance at the G20 will be his first visit to Latin America as U.S. president—unless he cancels like he did for April’s Summit of the Americas in Peru. But there are pressing matters to attend to, including a dinner with Chinese President Xi Jinping. Will the two countries be able to settle a tit-for-tat trade war in which Washington increased tariffs on $250 billion in Chinese imports and Beijing hit back with tariffs on $110 billion of U.S. imports?

The trade dispute is also consequential for Latin American countries, whose biggest trading partners are either the United States or China. While the spat makes some Chinese goods more expensive to import for the region, it presents new opportunities for Beijing to buy from Latin America rather the United States. The record amount of Brazilian soybean shipments this year to the Asian giant is one example.

Then there’s the signing of the renegotiated NAFTA deal, dubbed USMCA. On November 8, Mexico’s Economy Secretary Ildefonso Guajardo said ministers from the three member countries—Canada, Mexico, and the United States—will sign the trilateral trade deal on the sidelines of the G20. In Paris two days later, the Canadian Prime Minister Justin Trudeau told Trump he wants to resolve an issue over American tariffs on Canadian aluminum and steel imports before getting to Buenos Aires, throwing into question whether or not the deal will be signed in Argentina after all. But Canada may be willing to overlook the aluminum and steel tariffs if the White House finalizes an agreement regarding the Canadian auto industry. The new trade deal was concluded on September 30 after more than a year of talks about the 24-year-old North American Free Trade Agreement, which saw the countries trade over $1.2 trillion dollars last year.

Even if the three parties to the deal reach an agreement in Buenos Aires, each country’s legislatures will have to officially ratify the accord—a timeline that hangs in the balance given the new Mexican Congress in place, a divided U.S. House and Senate to be inaugurated in January 2019, and Canadian legislative elections scheduled for next October.