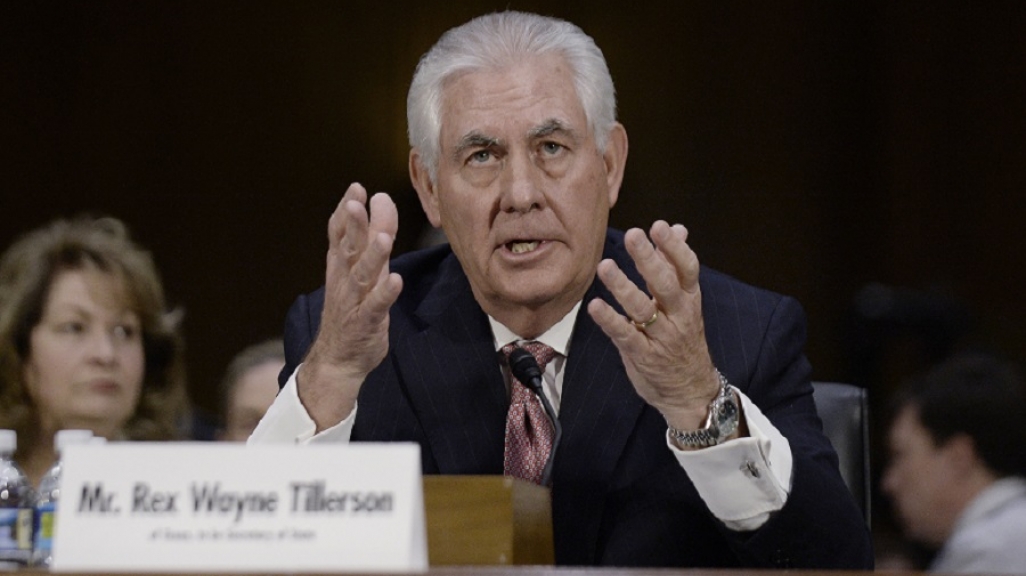 Explainer: How Are Trump's Cabinet Picks Linked to Latin America?

No Latinos were selected to serve in the next cabinet, but here’s how some of the key nominees are connected to Latin America.

Updated January 23 — It’s official: no Latinos will have been appointed to be part of Donald Trump’s cabinet. In fact, it’ll be the first cabinet in three decades without a representative from the 57-million strong U.S. Hispanic community. Still, some Latin Americanists have worked in the transition team and are under consideration for appointments within the administration.

Two of Trump’s core campaign policies will directly affect Latin America and the Caribbean: his protectionist trade and anti-immigration stances. Out of the 22 nominated or appointed members of the president’s cabinet, here’s a look at the picks expected to be carrying out that agenda most directly and their connection to the region.

Trump went straight to the boardroom to tap his nominee for the country’s top foreign diplomat when he selected Tillerson, who headed oil giant ExxonMobil since 2006. While Trump has said he wants to renegotiate the North American Free Trade Agreement (NAFTA), Tillerson, in a speech in 2012, acknowledged that the economies of Canada, Mexico, and the United States were intertwined because of the deal, and that he hoped for more partnerships with Mexican state oil firm Pemex in particular. His focus at the time was for the NAFTA countries to achieve “energy security” for the region. During his Senate confirmation hearing, Tillerson described Mexico as a “longstanding friend.” When asked, in an allusion to now infamous comments made by Trump when he launched his presidential campaign, whether he would describe Mexicans as “rapists” and “criminals,” Tillerson responded that he would never use such blanket statements about a group of people.

Tillerson has a long history with another Latin American country: Venezuela. He took Venezuelan President Hugo Chávez to court after the late president nationalized ExxonMobil’s assets in 2007. Although the World Bank arbitration panel ordered Venezuela to pay the oil giant $1.6 billion seven years later, it was a far cry from the nearly $15 billion ExxonMobil said was the market value of those assets, and much closer to the $1 billion Chávez originally offered. ExxonMobil has not operated in Venezuela, the country with the world’s largest oil reserves, ever since.

In 2015, five days after Guyana elected David Granger as president, Tillerson announced ExxonMobil had discovered 1.4-billion barrels’ worth of crude oil off the coast of Guyana, the largest find anywhere in the world that year. The discovery, though, lay beyond the coast of the Essequibo region, a disputed territory Venezuela also lays claims to. Venezuelan President Nicolás Maduro took the move as an affront, saying ExxonMobil was working to undermine Latin American and Caribbean unity built up by PetroCaribe. Several Caribbean countries, many of them PetroCaribe beneficiaries, did end up siding with Guyana in the Essequibo matter. Tillerson had a meeting with Granger on the calendar in December, but had to cancel it when Trump nominated him to head up the State Department.

In written responses provided to the Senate Foreign Relations Committee before his confirmation hearing, Tillerson recognized Colombia as "one of our closest allies in the hemisphere." He also qualified Plan Colombia, through which the United States gave Colombia $10 billion in aid over 16 years, as a success, but said he would review the current plan, known as Peace Colombia, which Congress has yet to approve. Ex-Colombian President and opponent of the current peace plan Álvaro Uribe and his associates have been lobbying Republican lawmakers in recent months.

While Tillerson has no known previous dealings with Cuba, at his confirmation hearing before the Senate Foreign Relations Committee, he said that the Trump team would review outgoing U.S. President Barack Obama’s rapprochement policy, begun December 2014, in particular the executive orders and his move to take the island nation off the State Sponsors of Terror list. He did not mention Venezuela during his hearing.

One of the staunchest immigration opponents in the Senate—and Trump’s first public supporter in that body—Sessions led the movement against immigration reform in 2013. First elected to the Senate in 1996, he called the 2010 DREAM Act “a reckless proposal for mass amnesty” and said that U.S. borders were in a state of “chaos and lawlessness.” In his testimony in support of Sessions’ nomination and against criticisms of bias against African-Americans, U.S. Civil Rights Commissioner Peter Kirsanow argued that limiting immigration was a way to protect black employment.

Arguably the Trump cabinet nominee with the most Latin America experience, General John Kelly served from 2012 to 2016 as commander of U.S. Southern Command, where he was responsible for U.S. military operations in the Western Hemisphere south of Mexico. In that role, he oversaw management of the Guantánamo Bay detention facility in Cuba and clashed publicly with Obama over the commander-in-chief’s plans to close it. When he stepped down from the SouthCom role in January 2016, he said, “My greatest fear was that I would be offered another job.” Trump nominated him for the cabinet post in December that year.

He gave remarks before the U.S. Senate Armed Services Committee three times during his tenure. In those statements, he regularly voiced concerns about involvement from the Lebanese Hezbollah group, Iran, and “Islamic extremist groups” in countries such as Argentina, Brazil, Paraguay, and Venezuela. He also highlighted increased Chinese military presence in the region as a threat to U.S. operations. As a bright spot in the region, he praised Colombia, saying it was “imperative” the United States remain involved in Colombia’s counternarcotics and post-conflict efforts in the wake of the peace deal with the Revolutionary Armed Forces of Colombia; U.S. Southern Command is involved in demining activities and military training there.

Kelly stressed that Capitol Hill should pay more attention to Latin America—and give more money to U.S. military operations there—to prevent the flow of drugs, weapons, and migrants in the name of national security. “In comparison to other global threats, the near collapse of societies in the hemisphere with the associated drug and [undocumented immigrant] flow are frequently viewed to be of low importance,” he said in a 2014 interview with Defense One. “Many argue these threats are not existential and do not challenge our national security. I disagree.”

As secretary of Homeland Security, Kelly would be responsible for some of Trump’s cornerstone campaign proposals: a full U.S.-Mexico border wall and anti-immigration policy. Some immigration experts, however, voice concern that Kelly’s military background will lead the Trump administration to treat the issue as a security issue rather than a humanitarian one.

Like Kelly, retired General James Mattis had his confirmation hearing before the Senate Armed Services Committee. While Latin America did not come up during that hearing, in his written responses to advance policy questions, Mattis said building up and “professionalizing” security forces and institutions in Latin American countries should be one of the Defense Department’s top priorities in the Western Hemisphere. He also underscored the need for continued U.S. support of Colombia’s peace accord implementation. On Cuba, he said that “significant differences” still exist between the two countries and he couldn’t recommend any military-to-military engagement or security cooperation at this time. On January 18, the committee voted 26-1 to approve Mattis’ nomination, which now goes to a full Senate vote.

Renegotiating NAFTA with the goal of bringing jobs back to the United States will be the first thing on Ross’ docket if confirmed, per comments he made during his January 18 confirmation hearing. “I am not anti-trade. I am pro-trade,” said Ross. “But I am pro-sensible trade, not pro-trade that is to the disadvantage of the American worker and the American manufacturing community.” Nicknamed the “King of Bankruptcy,” Ross built his reputation by buying failing manufacturing and production companies, restructuring them to make them profitable, and keeping several hundred jobs in the United States in the process. Initially a supporter of the Trans-Pacific Partnership, he’s since changed his tune upon review, saying that certain sections are "not consistent with what was advertised." In fact, Ross seemed to celebrate the fact that Trump's protectionist talk had led to drops in neighboring currencies. "The peso didn't go down 35 percent by accident. Even the Canadian dollar has gotten somewhat weaker—also not an accident," he said on Wednesday. "[Trump] has done some of the work that we need to do in order to get better trade deals." Both the Canadian dollar and Mexican peso dropped on the day of Ross’ Senate confirmation hearing.

Lighthizer will be one of the top officials charged with carrying out Trump’s plans to shift the country toward protectionism. Lighthizer, who served as a deputy trade representative during the Ronald Reagan administration, is a protectionist who’s cautioned against “unbridled” free trade policies carried out by Democrats and Republicans alike. In 2007 Senate testimony, he named Brazil as one of “the most egregious and consistent violators of U.S. trade law” along with Japan, China, and South Korea, though rarely mentions Latin America and regional trade agreements otherwise. In private practice, he represented large U.S. companies in NAFTA binational and World Trade Organization dispute panels.

In her January 18 Senate confirmation hearing, Haley cited concerns over Cuba’s lack of progress on human rights, even as it sits on the UN’s Human Rights Council, as an example of one area where the United States might consider its financial support of the international body. “If, for example, we see in the Human Rights Council that Cuba’s there and China’s there and we’re not seeing the human rights move in the way that America’s values are supposed to, yes, I’m going to come back to [Congress] and say, ‘Yes, this is a real problem. This doesn’t follow our mission,’” she said. But she added that, in contrast to comments from Trump, she would not consider pulling U.S. funds from the UN across the board.

Although she’s led a handful of international trade missions to countries in Europe and Asia, Haley is not known to have traveled to Latin America in an official capacity.

The former border state governor is gunning to lead the Energy Department, which he proposed to eliminate during the 2012 presidential race, except he infamously couldn’t remember the name during a debate. A fan of free trade but wary of granting the federal government more powers (and, he says, less transparency), Perry tentatively supported the TPP and Trade Promotion Authority during the 2016 campaign.

In 2006, the League of United Latin American Citizens sued Perry and the Texas Republican Party over charges of gerrymandering in Texan congressional districts to diminish the influence of Latino voters. But the U.S. Supreme Court upheld most of the redistricting plan. Perry is not known to have traveled to Latin America during his tenure as governor.

In his book America the Beautiful, Carson wrote that undocumented immigration needs to be dealt with in a moral way, and that border issues lack government leadership. In the book he mentioned a trip to Cuba he and his wife took and described Cubans’ access to health care, but the former 2016 GOP candidate said that Obama’s policy of rapprochement with the island “doesn’t make any sense.”