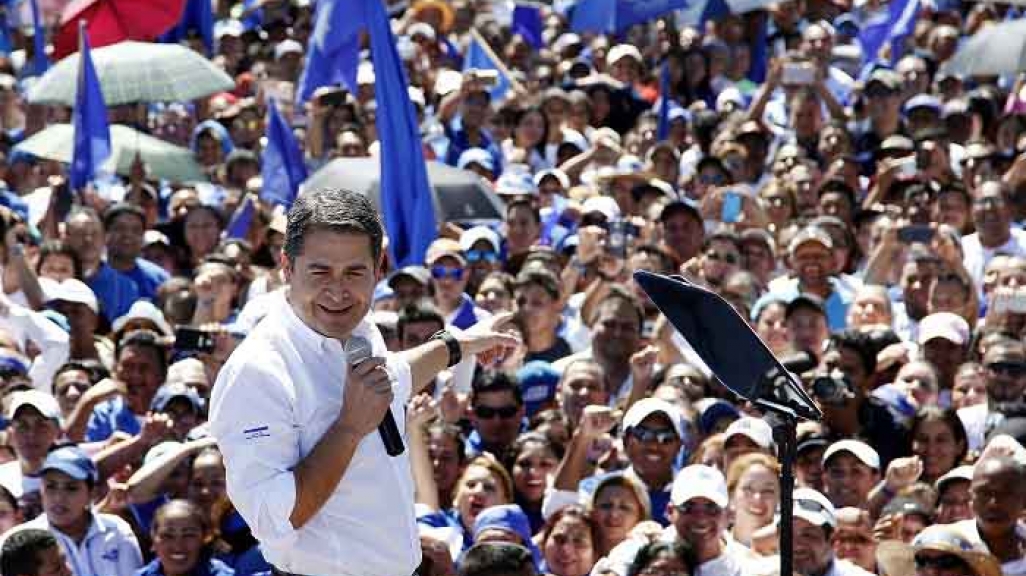 Polls show President Juan Orlando Hernández could win a second term on November 26 in a country where the issue of reelection sparked turmoil eight years ago.

When Honduran voters cast ballots on November 26, the election will be haunted by the ghost of the not-so-distant past. Juan Orlando Hernández will be the first president legally allowed to run for reelection in a country that saw another head of state kicked out of power just over eight years ago out of fear he’d try to do the same thing.

It’s no wonder that reelection is a contentious issue in Honduras. It was ex-President Manuel Zelaya’s moves to change the 1982 Constitution and seek another term that led to his 2009 ousting. His legacy lingers in voters’ minds, not just because another Zelaya is running (Luis bears no relation to Manuel) or because his wife and former First Lady Xiomara Castro ran in the March 2017 primaries. It’s partly because his overthrow upended a traditionally bipartisan system, rendering a new political order and dividing the Honduran public. But another reason is that Hernández, who leads polls, supported the 2009 coup to “prevent dictatorship” and is now pursuing a second term himself.

How did this happen? As The Economist reports, Zelaya’s penchant for policies similar to those of Venezuela’s Hugo Chávez left the country’s elites uneasy over his possible play for another term, resulting in him being led, pajama-clad, onto a plane to Costa Rica early one June morning. After a dramatic return and months of negotiations, Zelaya was eventually allowed to stay in the country but pledged not to run again. Fast forward to 2015, when former President Rafael Callejas raised the reelection controversy again by bringing suit before the Supreme Court saying that term limits were a violation of his human rights. In April of that year, the court ruled in Callejas’ favor, paving the way for Hernández to run again.

The Honduran general elections take place November 26 and, aside from voters picking a president for a four-year term, they’ll also elect 128 members of the unicameral Congress. Twenty members of the Central American Parliament, 298 mayors, 298 vice-mayors, and 2,092 council members will also be selected.

Just over 6 million Hondurans are registered, and voting is compulsory but not enforced. The 2013 general election yielded a turnout of 61 percent, while March’s primaries saw a 44 percent turnout. There are no runoffs or minimum percentage of votes required to win.

Polls indicate that Hondurans viewed security as a major problem in recent years. In 2012, the year before Hernández was elected, Honduras had the highest homicide rate in its history: 7,172 homicides were recorded, averaging 20 a day or 90.4 per 100,000 persons. A decline from such brutal levels may be helping the president’s poll numbers; the government projects that the 2017 homicide rate will reach 42 per 100,000—less than half the 2012 level. Still, two Honduran cities rank among the top 10 most dangerous worldwide. How the candidates pitch economic proposals will also be important, given that Honduras is sixth most unequal country in the world.

After the drafting of the 1982 Constitution, the PNH and PLH dominated Honduran politics. They were even-handed competitors with similar levels of electoral success. When one won, it would be the result of a small margin of votes that would migrate between parties each election. Since 2009, the PLH split in two, which helps Hernández’s PNH.

CID Gallup’s September polls indicate a strong lead for the incumbent. He was the frontrunner with 37 percent while Nasralla and Zelaya had 22 percent and 17 percent, respectively. Hondurans also tend to identify more strongly with Hernández’s party.

President Hernández has long been active in Honduran politics through his previous roles as a president of the National Congress. The conservative leader, who supports mano dura policies, has an enviable approval rating of 61 percent, up from 49 percent last year.

During his tenure, his government has enacted social programs that provided roofs and water filters to the poor, as well as focusing on the tourism, textile, and call center industries. He’s also received positive review of his handling of the economy by the International Monetary Fund, with a GDP growth of 3.6 percent in both 2015 and 2016. The 2017 Law and Order Survey also saw Honduras tied with Chile for the best score in Latin America, as well as demonstrating the greatest worldwide reduction in perceptions of security between 2015 and 2016. According to CID Gallup, a declining portion of Hondurans think the country is headed in the wrong direction.

Hernández has attributed this to his heightened security measures, which often involve deploying the military. This method, however, has also earned criticism of increased human rights abuses.

Salvador Nasralla is a former sports broadcaster who jumped into politics in the 2013 elections, and who, through his alliance with Manuel Zelaya, seeks to oppose the "dictatorship" of the National Party. He leads the Anti-Corruption Party, which he founded during his 2013 presidential candidacy, and his outsider status has drawn comparisons to Jimmy Morales’ winning candidacy in neighboring Guatemala.

In the 2013 election, Nasralla came in fourth with 13.4 percent of the total vote. This time around he beat out former First Lady Castro to win his party’s nomination. In addition, the left-leaning Liberty and Reestablishment Party (Partido Libertad y Refundación, Libre) and Innovation and Unity Party (Partido Innovación y Unidad, PINU) parties nominated him as their candidate through an opposition coalition “against the dictatorship,” as their slogan goes.

Nasralla, who is married to a former Miss Honduras, has garnered extensive media exposure, in part due to run-ins with the press. He polls second, but he also has the lowest favorability levels of the three top candidates.

Luis Zelaya, a university professor new to the political sphere, is promoting a model of “social liberalism.” His platform is one of fair taxation, freedom of speech, and equal access to education.

He heads the more centrist faction of the PLH. Founded in 1891, it is the oldest political party in Honduras. In 2013, the PLH performed its worst in decades when it finished third. With this in mind, PLH supporters celebrate Zelaya as up-and-comer, considering that a year ago he was relatively unknown and now has 17 percent of the vote in the latest Gallup poll. He could bring together the other factions for a winning coalition against the PNH, but says he will not compromise his agenda with that of the PAC, asserting he can win based on ballots cast by disenchanted voters.
• Facebook
• Twitter: @luiszelaya_hn
• Website