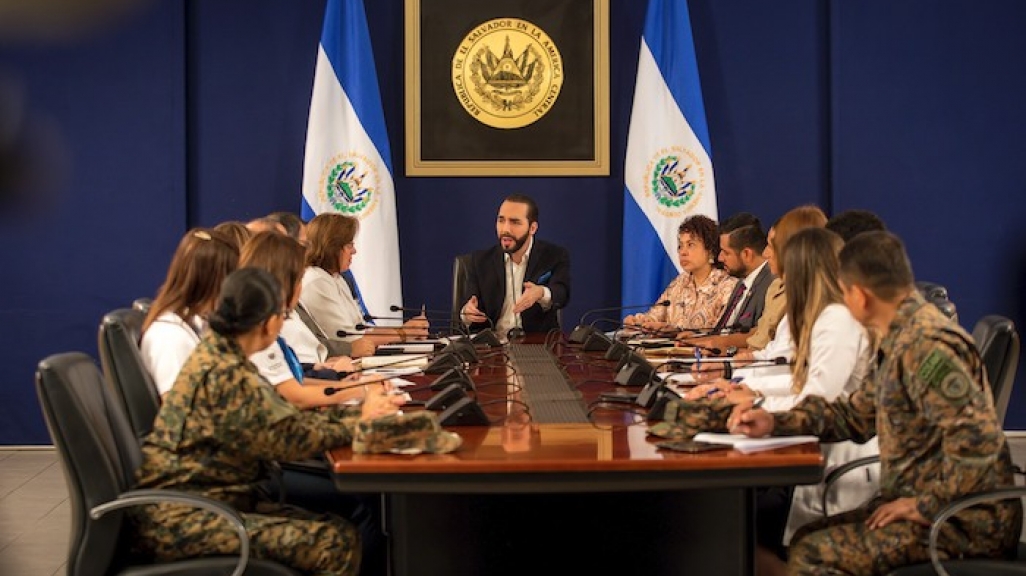 President Bukele runs a meeting. (Image: Office of the Presidency)

With 100 days as president under his belt, what has Latin America’s youngest president done to address corruption, security, and emigration?

On September 8, Nayib Bukele marked the first hundred days of his five-year term as El Salvador’s president. The Twitter-savvy president, elected February 4, ran as an outsider vowing to combat corruption and impunity, improve security, and curb emigration through heightened economic incentives and opportunities. Since his June 1 inauguration, Latin America’s youngest president has enjoyed a rising approval rating that hit 90 percent in August—the highest for a Salvadoran president in 15 years.

More than three months into Bukele’s presidency, here is a look at the actions he has taken to execute his campaign promise to prioritize the following three areas.

As a candidate, Bukele made fighting corruption the centerpiece of his platform. He continuously called for an El Salvador-based, international agency against corruption, akin to the recently ended UN-backed commission in Guatemala and a current mission in Honduras. Bukele took a step forward to fulfilling that promise on September 6 when he launched the beginnings of the International Commission against Impunity in El Salvador (CICIES) in conjunction with the Organization of American States (OAS).

While the UN weighs a request from the Bukele administration to join in backing the CICIES, the Office of the UN High Commissioner for Human Rights tweeted “concern” that journalists from independent media outlets El Faro and Revista Factum were not allowed to attend the president’s press conference announcing the new initiative. Bukele dismissed the outlets’ complaints and said the journalists were denied credentials due to “disrespectful and petulant” behavior at a previous press event.

Bukele proposed the anti-corruption body a year ago as part of his campaign platform, then dubbed the Plan Cuscatlán. He described it as an independent entity with three key functions: supporting the investigations brought forth by the Public Ministry, helping institute policies to combat corruption and impunity, and ensuring impartial and thorough investigations. In contrast to the Guatemalan body, which was run out of that country’s Public Ministry and headed by the attorney general, the Salvadoran version will operate primarily out of the Executive Branch, per the OAS’ statement, and will work to establish cooperation agreements with the Legislative Assembly, the Supreme Court, and the Public Ministry. According to Bukele, he can install the commission via executive decree and does not require legislative approval.

A continued trend of declining homicides

To address the country’s high crime rates, Bukele created a multi-phase plan, which he says will eradicate gangs in El Salvador in three to four years. In June, he launched the $31 million Territorial Control Plan. This first phase of his security plan focuses on 17 municipalities in El Salvador determined to have the largest gang presence, though officials expect to eventually expand nationally. The plan heightens police and military presence in the selected areas to drive out gangs and financially diminish their control over the territories. Two months in, the Salvadoran police reported over five thousand arrests nationally.

The plan also involved declaring a state of emergency in El Salvador’s prison system, putting 28 prisons on lockdown by prohibiting visitors, confining inmates to cells, attempting to block all communication networks within the prison and with the outside world through a near-blackout of cell phone signals, and transferring prisoners to more secured facilities.

That state of emergency was officially lifted on September 2 due to a decrease in homicides in the country. Justice Minister Rogelio Rivas stated that the homicide rate has been steadily declining since June with an average of fewer than five killings a day, down from the average of nine killings a day in 2018. July saw 154 killings with zero homicides on July 31, the first day without homicides since January 2017, and homicides dropped in August to 131 cases. The decline, however, predates Bukele’s government; the homicide rate dropped 15 percent from 2017 to 2018, according to Insight Crime, which reports a steady decrease since 2016.

According to a Prensa Gráfica poll conducted in August, a larger percentage of Salvadorans feel safer in the places they frequent the most on a daily basis, such as their neighborhoods, their homes, and in supermarkets—with the feeling of insecurity in these places decreasing an average of 21 points compared to three months ago. The poll also found an increase in the approval of the National Civil Police with two-thirds of Salvadorans having a positive opinion of the force—an 11-point increase since 2018.

Ever conscious of the public perception, the Office of the President released a promotional video to commemorate Bukele’s first one hundred days in office that opened with several shots of armed security forces.

After a photograph of a Salvadoran father and daughter who drowned in the Rio Grande after attempting to cross the river between Mexico and the United States caused an international outcry in June, Bukele acknowledged that conditions in his country drive emigration, having said previously that the fact so many Salvadorans wish to leave the country is “not something to be proud of.” Bukele pointed to economic growth as a solution for rising poverty and unemployment that lead to mass emigration. During his campaign, Bukele promised new economic policies that would attract foreign investment and create opportunities for Salvadorans, making them less likely to want to emigrate.

Although he has succeeded in securing pledged development funds from both the United States and Mexico, domestic economic policy proposals targeting emigration could run into roadblocks in the Legislative Assembly. The legislature requires 43 votes to pass laws, and his Grand Alliance for National Unity (GANA) coalition only holds 10 of the 84 seats. With Salvadorans accounting for 13.8 percent of U.S. border apprehensions of migrants from the Northern Triangle in 2019, Bukele has sought to set his country apart from Guatemala and Honduras, suggesting the Northern Triangle neighbors are not doing enough to prevent migration.

He has also taken steps to rekindle the country’s bilateral relationship with the United States. During a visit to El Salvador in July, U.S. Secretary of State Mike Pompeo met with Bukele and the two officials discussed working together to combat gang and drug activity, reduce immigration to the United States, and promote U.S. investment over financial assistance to El Salvador. In August, Bukele hosted Speaker of the House Nancy Pelosi, who headed a 13-member congressional delegation, with whom he discussed improving economic conditions to reduce emigration, the forthcoming anti-corruption commission, and supporting victims of gender-based violence. Later that month, Kevin McAleenan, the acting U.S. secretary of Homeland Security, signed a letter of intent with Salvadoran officials. The two countries formally agreed to collaborate on improving law enforcement and security in El Salvador, promoting information-sharing and economic growth, and increasing border security and asylum and protection capacities.