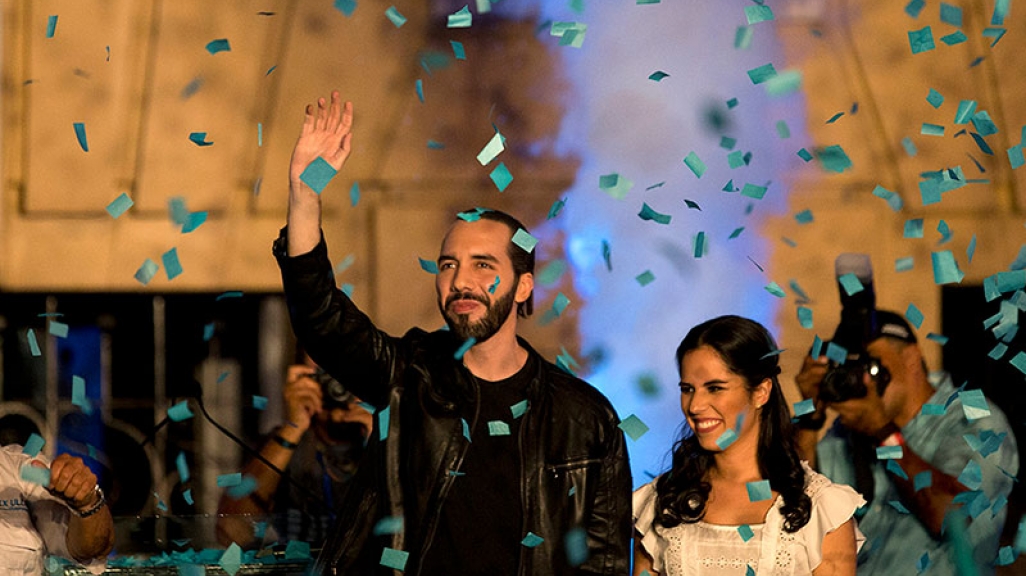 Learn about what the 37-year-old former mayor plans to do as president.

On February 3, El Salvador broke a 30-year streak of two-party control of the presidency when voters elected Nayib Bukele. The former San Salvador mayor received 53 percent of the vote as the candidate of the Grand Alliance for National Unity (GANA), a coalition that broke off from the conservative National Republican Alliance (ARENA), though Bukele was formerly a member of leftist President Salvador Sánchez Cerén’s governing Farabundo Martí National Liberation Front (FMLN) until 2017.

His ability to win Sunday’s first-round vote is a blow to the country’s traditional parties. Carlos Calleja of ARENA—the party in power from 1989 to 2009—came in a distant second with 32 percent of ballots, while the ruling party’s Hugo Martínez came in third with 14 percent. The waning popularity of the FMLN became evident in last year’s congressional elections, when it lost eight seats, leaving it with only 23 out of the 84 legislators. Sánchez Cerén is now on his way out the door with the lowest approval rating of any Salvadoran president in the last three decades, according to a CID Gallup poll. Critics argue the president has failed to manage violence or improve economic opportunity.

A savvy social media user, Bukele branded himself as an outsider, avoiding being boxed into a particular ideological framework for an electorate that shows little party loyalty, particularly among millennial voters tired with politics as usual. The 37-year-old, a businessman and founder of a public relations firm before he got into politics, donned a leather jacket and blue jeans at his victory rally. He will be the youngest elected president in Latin America when he takes office June 1.

But Bukele’s mandate is diminished by low turnout and a weak backing in Congress. Out of the 5.2 million Salvadorans registered to vote, only 45 went to the polls, the lowest participation rate since 1999. Meanwhile, GANA has only 10 of 84 seats in the National Assembly that remains dominated by ARENA and FMLN. This means Bukele will have to reach across the aisle to pass laws. That won’t be easy, given his tumultuous relationship with his former party.

Where the president-elect stands on the issues

While Bukele skipped out on all candidate debates, he made corruption a central issue on the campaign trail, adopting the slogan “There’s enough money when no one is stealing.” He has called for an international body like the CICIG in Guatemala to combat impunity in the country and look into past ARENA and FMLN presidencies, three of which have been accused or convicted of corruption. Bukele’s public criticism of inefficiencies of the FMLN and President Sánchez Cerén ended in his 2017 expulsion from the party after he called a female union leader a “traitor” and “a witch” and threw an apple at her.

Bukele also wants to battle corruption in the police force, improve salaries, and update equipment as a measure to improve security in one of the world’s most violent countries outside a war zone. His platform focuses on prevention by engaging youth and facilitating reintegration into society once they leave the gangs, a strategy the current administration has coupled with a hard-line tactics.

When it comes to the economy, Bukele’s promises to boost job creation and the middle class by reducing taxes and creating economic opportunities that incentivize Salvadorans not to emigrate. He proposes a long-term development plan including a series of infrastructure megaprojects such as an airport that could cost as much as $100 million, a train along the Pacific coast that would connect to other Central American countries, and four metro lines in the capital’s metropolitan area.

When it comes to foreign policy, Bukele advocates for better relations with the United States, despite friction over migration and the Trump administration’s moves to end the temporary protected status (TPS) of 200,000 Salvadoran immigrants. The U.S. Ambassador in El Salvador Jean Manes congratulated the president-elect on Sunday.

For his part, Bukele’s stance is in line with certain U.S. policies when it comes to Venezuela and Nicaragua. Sánchez Cerén is among the last allies Maduro has in the region and Bukele has promised to issue a new era of relations based on “the collaboration and observation of highest democratic values.” While Bukele has not publicly recognized Venezuela’s Juan Guaidó as the interim constitutional leader of the country, the Salvadoran took to Twitter the day of Guaidó’s declaration, January 23, to decry the illegitimacy of leaders such as Nicolás Maduro and Daniel Ortega. Guaidó issued his own tweet on February 3 congratulating the president-elect and saying he was ready for that new era of relations.