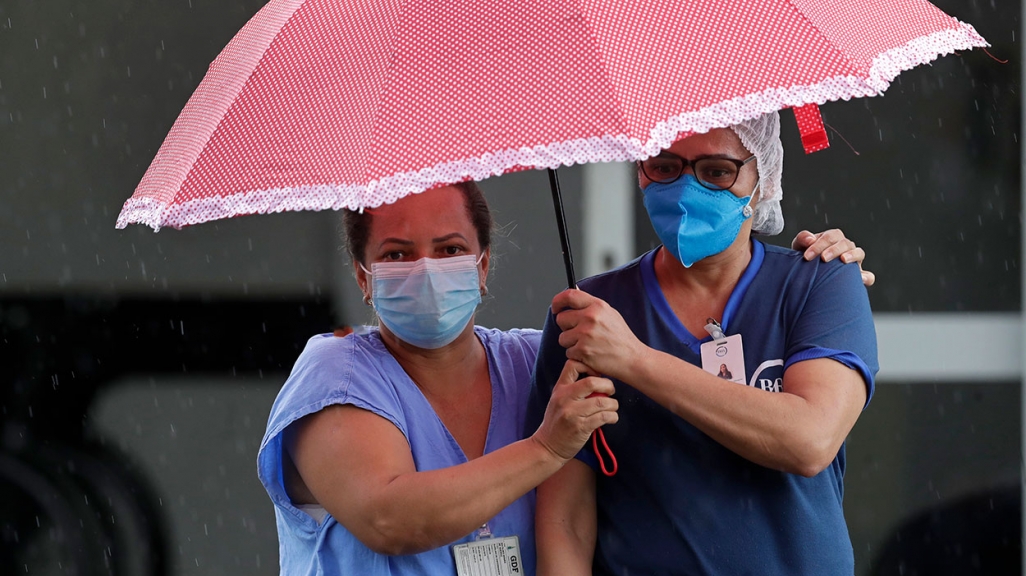 Covid Check-in: Brazil's Hurdles a Year into the Pandemic

Amid a vaccine rollout and the P.1 variant fueling contagion, the government is looking to provide another round of emergency aid.

More than a year into the pandemic and despite a vaccine rollout, the coronavirus is hitting Brazil hard, with a new variant adding to the woes. On March 10, the country registered a new daily record of nearly 2,300 deaths, and has overtaken the United States in terms of both daily confirmed cases and deaths. More than half of the country’s major cities’ intensive care units are at 90 percent capacity, and local governments are seeking to get a handle on the situation, translating to lockdowns in Brasília and São Paulo, as well as a curfew in Rio de Janeiro.

But as the federal government works to acquire enough vaccines to implement an ambitious immunization campaign, it also aims to pass a second stimulus package to alleviate some of the country’s lasting economic pains.

Despite the vaccine rollout getting underway, 2021 presented a whole new challenge in the form of the P.1 variant. In January, researchers detected it in the northern region of the Amazon state. The strain, thought to potentially be more contagious than the original L strain from China, carries the E484K mutation also found in a variant detected in South Africa. It appears to resist antibodies and increase chances of reinfection,  and could be between 1.4 and 2.2 times more transmissible than the UK variant.

What happened in the Amazonas region earlier this year demonstrated how dangerous P.1 could be if not contained. Despite the Amazonas region having faced an outbreak in April 2020 in which about two-thirds of the city’s 2 million inhabitants are thought to have been infected, a January outbreak tore through the region overwhelming the health system, with about 66,000 cases reported that month. In the city of Manaus, a study showed that in seven weeks running from November 2020 through January 2021, the P.1 variant became the prevalent strain.

Now the variant is on the move, not only threatening increased contagion in Brazil but also raising concerns about P.1 spreading across borders. Fiocruz researchers also announced in a recent epidemiological study of eight Brazilian states that variants—mostly P.1, but also South African and UK strains—are dominant in six of those states. At least 25 countries worldwide have detected the P.1 variant, but local transmission is not yet widespread. Still, neighboring countries such as Argentina, Colombia, and Peru have imposed a mixture of air and land restrictions on travel from Brazil.

In addition, President Iván Duque of Colombia cancelled a trip to Brasília programmed for March 23 due to Brazil’s worsening health crisis.

Brazil became Latin America’s fifth country to kick off its immunization campaign when it administered Sinovac’s CoronaVac to a group of health workers on January 17.  Shots with regulatory approval for emergency use include AstraZeneca-Oxford and Sinovac, while Pfizer-BioNTech gained full approval rather than just emergency use—the first of its kind in the region—meaning it does not require revision after a state of emergency. The government was discussing but did not have a supply deal with Pfizer as of this report, however, given that President Jair Bolsonaro has criticized possible side effects from the shot as well as contractual conditions signed by other countries.

Clinical trials are taking place for other vaccines, including the Johnson & Johnson and Sputnik V, and Brazil is in talks with U.S. firm Moderna to acquire 63 million doses over the next year, as well as with India’s Bharat Institute to purchase 20 million doses of the Covaxin shot. According to the country’s vaccination plan announced in December 2020, Brazil aims to inoculate 51 million people by June 2021. The four-stage plan, prioritizing health workers and the elderly, indicates that about 148 million Brazilians, or 70 percent of the country’s 212 million people, must be immunized to stop contagion.

As of March 10, authorities had administered a total of 11.76 million doses, or 5.53 per 100 people, making Brazil the country with the second-highest number of doses administered per capita in the region after Chile at the time of this report. Overall, Brazil has administered more doses than any other country in the Americas. But the country is likely to face hurdles to meet vaccination targets. Pazuello has revised the number of doses expected to be delivered in March four times, down from 46 million to 25 million doses. In a letter to the Chinese embassy, Brazil’s federal government recognized that a vaccine shortage could happen and asked for 30 million doses of Sinopharm shots.

On the positive side, while we’re in early days of research, preliminary research shows positive news for vaccines and the P.1 variant. Reports indicate that the AstraZeneca-Oxford shot does not need modification against Brazil’s P.1 strain. Findings published in the New England Journalism of Medicine indicate that the Pfizer-BioNTech vaccine is also effective against this strain. Instituto Butantan also announced on March 9 that the Chinese Sinovac shot is effective against all three variants present in the country.

One challenge for the vaccine rollout is the president himself. Bolsonaro has repeatedly said he will not take the vaccine, affecting vaccine acceptance among his supporters. While a January Datafolha poll showed 79 percent of Brazilians intend to get vaccinated, the numbers split based on political leanings. Among Brazilians who view Bolsonaro’s administration poorly, 88 percent say they will get vaccinated, while the number falls to 68 percent among those who back government.

But, given the peak in casualties and positive cases, legislators and the private sector are pressuring the president to ease the process for the country to acquire more vaccines, leading Bolsonaro to meet with Pfizer and negotiate a contract on March 8. On March 10, the president also signed a law easing the conditions for local governments to sign contracts with providers directly and authorizing the private sector to buy vaccines as long as they donate half of their purchase to the public health system.

Another round of emergency aid

As the health crisis takes a toll on Brazilians, so does the country’s economic situation. Brazil’s GDP saw its biggest drop in 24 years, with a contraction of 4.1 percent in 2020. The government is looking to pass another round of emergency aid. The first round, which began in April 2020, involved monthly checks worth roughly $100 to low income and informal workers through December. The payments were reduced by half in September, and on January 1, 2021, the economic assistance ended. While the economic measure is thought to have saved some 66 million Brazilians—about 30 percent of the population—from falling below the poverty line, it also left the country’s debt-to-GDP ratio at 90 percent by the end of 2020 compared to 74 percent one year prior and cost Brazil about $55 billion.

The aid package gave Bolsonaro an approval boost initially. A DataPoder360 poll showed that among those who received first-round aid checks, presidential approval was at 52 percent in January 2021, but fell to 38 percent in March, as Brazilians await a new aid package.

Now, Congress aims to pass another relief bill worth $7.8 billion, this time consisting of four monthly installments worth about $44 that would start in March and will go to about 40 million low-income Brazilians. The Senate approved the bill in a second-round vote on March 4 but rejected a proposed amendment from the opposition to remove the $7.8 billion ceiling spend to avoid limiting the economic assistance program. Economy Minister Paulo Guedes is committed to showing austerity after the record budget deficit in 2020. As Bolsonaro nears a run for reelection in 2022, he is at odds with Guedes’ austerity concerns. The Chamber of Deputies approved the measure with a 341 to 121 vote on March 10. The emergency package needs to be approved twice in the lower house with at least 308 votes.

The Economic Commission for Latin America and the Caribbean estimated a 5.3 percent GDP contraction in 2020, and forecast 3.2 percent growth for 2021.