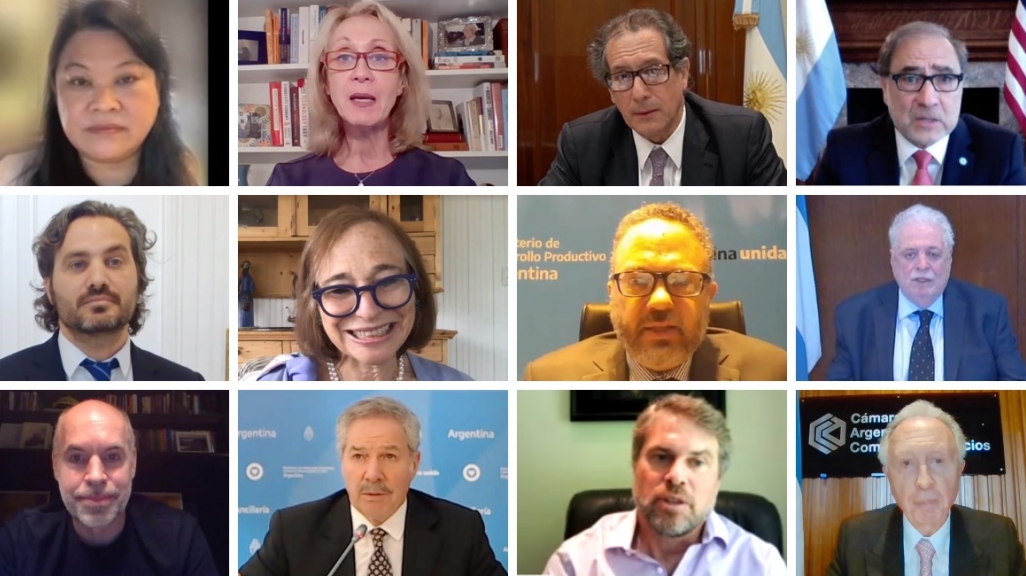 Speakers at the 2020 virtual conference.

Members of the presidential cabinet, leading officials, and multilateral and financial experts spoke at the seventeenth edition of AS/COA’s Buenos Aires conference.

In his opening remarks at the seventeenth AS/COA Buenos Aires conference, the President of the Chamber of Commerce and Services of Argentina Jorge Luis di Fiori highlighted the state’s role in reacting quickly to activate funds. “The crisis revealed a capacity to agree on common strategies,” he said. AS/COA President and CEO of AS/COA Susan Segal added that leadership is critical to controlling the health crisis. She stressed that Argentina has done a good job coordinating between national, city, and provincial governments, saying that “integration will be a crucial tool, as well as an opportunity for growth to protect the population in our countries.”

In his remarks, the Mayor of the City of Buenos Aires Horacio Rodríguez Larreta reiterated the importance of dialogue, saying it affects the future of the country. “We have to end the conflicts that harm Argentina today and throughout its history. The only way to overcome the deadlock and reach a broader consensus is through dialogue,” said Larreta. He also emphasized the measures the Argentine capital has taken to prepare for a post-pandemic world, including the decentralization of activities, so that people can live closer to their jobs and commerce, which goes hand in hand with promoting sustainable activity.

The Chief of the Cabinet of Ministers Santiago Cafiero highlighted achievements such as the fact that there were over 60 gatherings by government officials to exchange ideas between the executive and the legislature, saying that “when we speak of establishing debate, we also practice it within the government.”

He also spoke of Argentina’s success in uniting the national, federal, and provincial powers to work cooperatively. “Those are the results society demanded—a maturing of our political leadership.” Cafiero highlighted the country’s triumph in achieving sovereignty of goods, advancing central policies, and that about nine million Argentines received the government’s emergency income due to the pandemic. He finished by saying that he believes that Argentina is on the path toward economic recovery, advancing with pragmatism, and—for that—dialogue is necessary.

The Minister of Foreign Affairs Felipe Solá began his remarks by emphasizing the importance of an economic program prepared for a post-pandemic world, adding that he has faith in the country’s resilience. “We have to go back to believing in Argentines and their human resources,” said the minister, stressing the importance of respect for the private sector as well. He went on to speak about the need to increase global exports, saying that such activity is very low today compared to the country’s potential and that the value per unit must increase. Solá added that Argentina should export what it knows, meaning not only grain but also, among other things, technology. He spoke of future projects and meetings focused on growth with investment councils and business forums.

Solá then spoke about the need for a strong flow of investments and productive infrastructure for job creation, adding that many projects remain pending. He finished his remarks by saying that Argentina showed signs of being able to adapt to a “tremendous invasion like COVID-19. The country’s capacity to change should serve as a sign of hope that the country will also have the ability to create sustainable employment in the future.”

Productive policies have to address gender gaps, said Matías Kulfas, the minister of productive development. Inequality is “intolerable,” and, furthermore, those gaps prevent half of the country’s population from fully developing their creative potential. He added that Argentina, in order to get ahead, needs a new productive and social consensus that lasts not just one to two years but a whole decade.

“We do not need additional devaluations,” said Miguel Ángel Pesce, Argentina’s Central Bank president, in a pre-recorded presentation. On inflation, which he described as a chronic problem, Pesce said, “we do not look at quantitative measures of inflation but rather at a series of principles,” such as the real interest rate. And while many go on about how Argentina needs foreign investment––which is welcomed as it helps technological development and innovation––the greatest challenge, said Pesce, is how to “channel investment, credit, and internal savings.” When it comes to expanding exports, he said that there is “great potential” in hydrocarbons and their derivatives.

The Argentine Ambassador to the U.S. Jorge Argüello opened his remarks by highlighting the value of this AS/COA conference as a tool to strengthen the bilateral U.S.-Argentine relationship, given that it brings together leaders from different sectors. As such, he added, “political leaders, both those in the government and the opposition, have the obligation to find common ground.”

He also stressed the importance of, as an ambassador, understanding points of contradiction between the two countries in order to find resolutions. Finally, speaking about the Argentine debt, the ambassador discussed new projects on the horizon, including the letter of intent that the country’s government recently sent to the IMF in which it proposed a new loan project.

On the whole, Latin America’s financial sector is in a “very very strong situation” with well-protected and liquid banks, said James Scriven in a panel moderated by Segal. Economic recovery, meanwhile, will be challenging, said Joyce Chang, who noted that J.P. Morgan projects that in the region only Uruguay will see a recovery in 2021 that equals the 2020 contraction. She added that even better-than-average performers like Chile and Colombia will only see recoveries that are two-thirds of this year’s contraction. Looking at Argentina specifically, Chang said J.P Morgan views Argentina’s debt renegotiation as a “step in the right direction,” while adding, “It is necessary but not sufficient, though, to stabilize the macroeconomic outlook.” She said the marketplace will be watching how discussions between the Fernández administration and the IMF materialize along with the medium-term framework, while investors will be looking for credible fiscal consolidation to stabilize the economy.

In closing, Scriven highlighted the importance of using the health crisis as an opportunity to improve the lives of people around the region. “When a hurricane goes through one of our member countries and destroys houses and infrastructure, it gives an opportunity to build back better. Latin America and the Caribbean—and the world—have the moral obligation to build back a better society,” he said.

I’m extremely concerned w/what the crisis is leaving behind … I want to make sure we take advantage of the crisis to make things better.

Latin America & the Caribbean—and the world—have the moral obligation to build back a better society.

Minister of Health Ginés González García, in the conference’s closing remarks, detailed the effect that COVID-19 has had on Argentina and the precautions that the government has taken to address it. He pointed out that Argentina instituted the necessary measures in a timely, united manner to manage the pandemic with a "single federal health policy for the entire country." He also spoke about the country’s efforts to produce and distribute a vaccine, not only at the national nevel but also at a regional one. “Health policy is perhaps one of the most effective tools to work toward equity, equality,” concluded the minister.

Pia Fuentealba contributed to this summary. 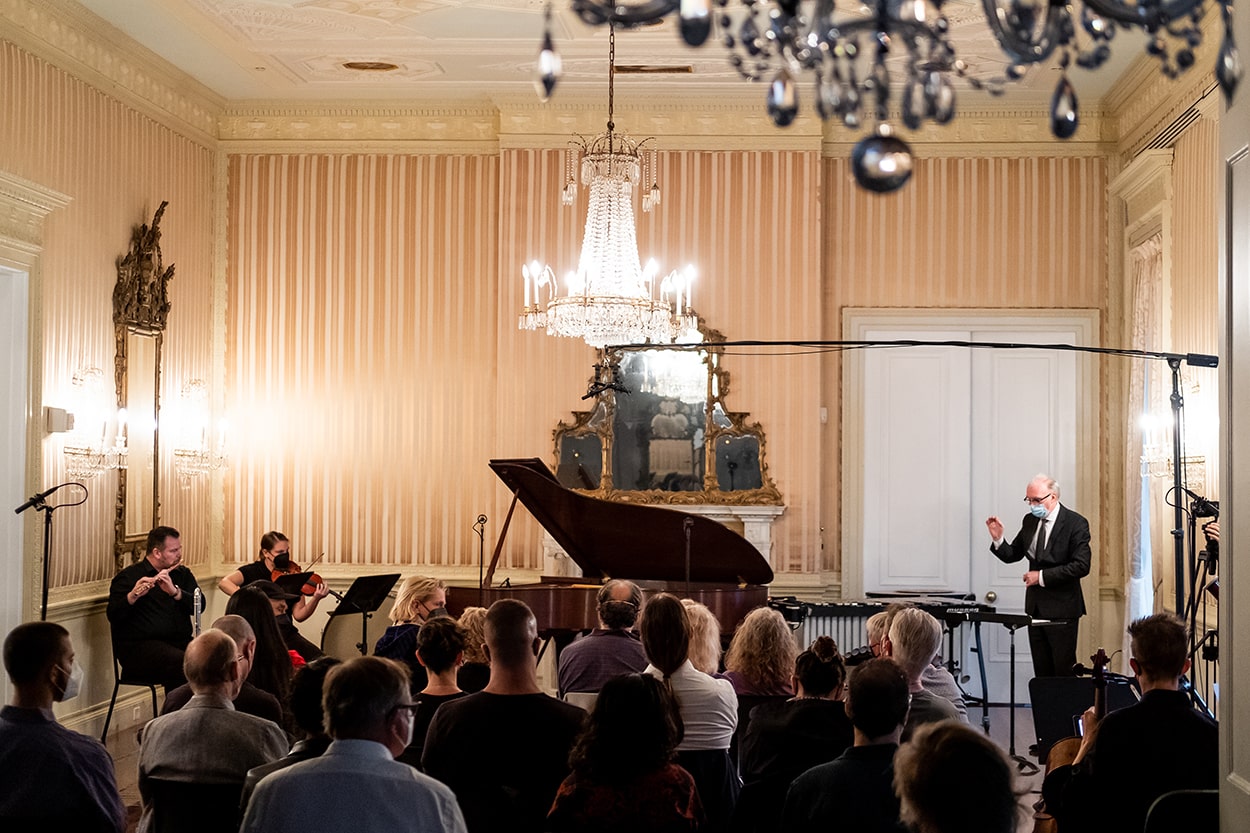 Music of the Americas: Talea Ensemble and Season Recap Two

This week, we look back at the 2021–2022 season and release the video of Talea's concert on our stage.