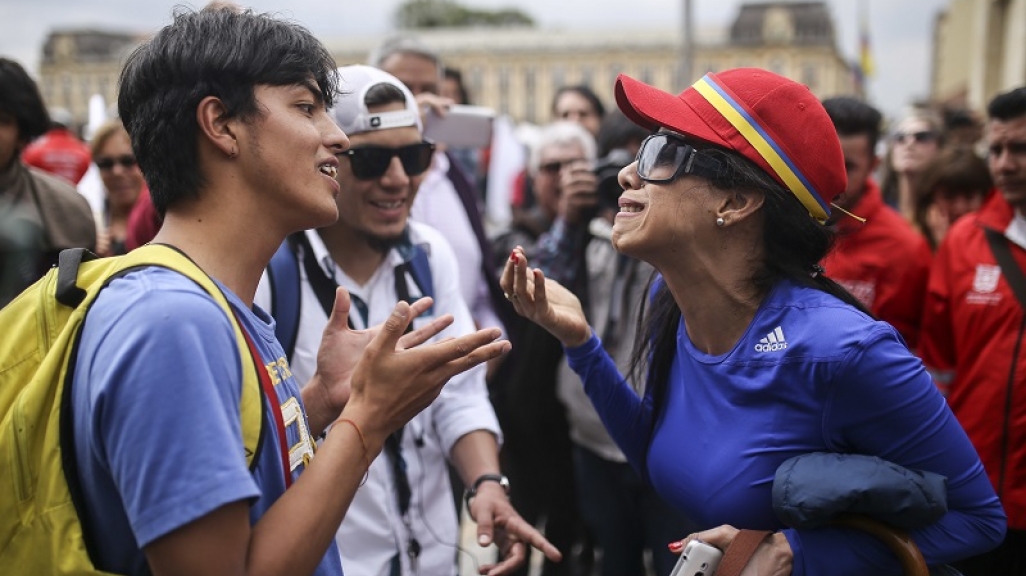 The Colombian Congress approved a second peace agreement with the FARC, but Álvaro Uribe and other opposition leaders vow to take the fight against its implementation to the streets.

Updated December 1 — Less than two months after voters rejected an initial peace deal between the Colombian government and the Revolutionary Armed Forces of Colombia, Congress approved a revised version late on November 30. The measure passed unanimously, with no votes against nor abstentions, after opposition Senator Álvaro Uribe’s Democratic Center caucus walked out. The deal sets in motion rebel demobilization and disarmament timelines, which begin on December 1. But the legislation will face numerous obstacles in its implementation, and the divided country remains a long way from peace.

Even with ink on the paper, the revised deal with the FARC, as the rebel group is known, faces judicial hurdles to its implementation. While Congress approved the deal generally, many specific points—including thorny issues of political participation and sentencing of ex-guerillas—will need individual legal approval. For those cases, the president applied for “fast-track” status, which would, among other things, reduce the number of debates required from eight to four so that the government can enact the terms more swiftly and also give the president veto power over any modifications to the deal made by Congress. The country’s Constitutional Court is currently reviewing the proposal, though one magistrate created a hurdle when she recommended the court grant the executive fast-track status—but only under the condition that the public also approve the fast-track terms via popular vote.

The government argues that the fast-track status is crucial to enacting the agreement, especially as a bilateral ceasefire only remains in place until the end of the year. In the Senate debate on the revised agreement, lead government negotiator Humberto de la Calle stressed the urgency: “If there are not fast decisions, there will be consequences. … [We need to] make sure we get to the other side of the riverbank since we’ve already crossed the midway point of the river.” The original deal was the result of four years of public peace talks held in Cuba, plus two years of private talks before that.

Outside Congress, the deal faces a fractured public. Colombian voters stunned observers on October 2 when they rejected the original 297-page agreement between the government and the FARC in a plebiscite vote—and by a margin of less than half a percentage point. The outcome was a political blow for President Juan Manuel Santos, who signed the original deal with FARC leader Rodrigo Londoño as regional heads of state looked on at a September 26 ceremony in Cartagena.

The vote also gave a boost to Uribe, Santos’ predecessor and main rival, who headed the campaign against the deal. Santos has suffered from low approval ratings throughout his second term, hitting 34 percent approval in an October Gallup survey—a five-point rise from the previous poll. Uribe’s approval numbers, meanwhile, are holding steady at over 50 percent. The campaign itself was acrimonious, with the No campaign manager saying afterward that their message was explicitly one of indignation and that they wanted voters to head to the polls “riled up.” Turnout among Colombian departments that voted No was 10 points higher than among those that voted Yes (41 to 31 percent).

Since the plebiscite vote was only binding on the original agreement, government and FARC negotiators went back to the negotiating table in Havana with input from opposition leaders—though, according to them, not sufficient input. They came out with a revised 310-page agreement that included reworked sections on land reform, ex-guerrillas’ political participation, and a section on gender ideology that galvanized religious conservative voters during the plebiscite campaign.

The two parties signed the revised agreement—to much less fanfare—in Bogotá on November 24. This time around, the president eschewed a popular referendum and instead put the new agreement before the legislature for legal approval. But in bypassing the public, the president vexed some of his supporters who voted in favor of the original agreement.

Amid all of this, the Nobel Committee awarded Santos the Nobel Peace Prize on October 7, a move met with tentative congratulations from some Colombians (including Uribe) and indignation from others who felt the award was dismissive of popular opinion that’d rebuffed Santos’ legacy project five days earlier. Santos is set to receive the award in a ceremony in Norway on December 10.

If the deal takes too long or is not fully implemented, Colombian security forces worry that up to half of the FARC’s currently 7,000-strong ranks will balk at the government-sponsored demobilization process, and instead hold on to their weapons and deepen their involvements with the illicit drug trade. Moreover, if public resistance to the revised deal remains high, rebels could be further discouraged from disarming, fearing reprisals from various groups. In the late 1980s and 1990s after an initial round of peace talks, paramilitaries and security forces killed hundreds of members of the political party formed by newly disarmed ex-FARC rebels. The FARC says some 200 rural, civil society, and indigenous leaders, many of whom advocated for the peace deal, have been murdered in 2016, including 36 since the bilateral ceasefire went into effect on August 26. The rebels asked the president to speak out against the killings and the “complete” impunity for the perpetrators.

Uribe and his Democratic Center party, meanwhile, have a much more straightforward task in the coming months: keep up resistance to the revised deal, if possible, all the way until 2018, when Colombia holds its next presidential elections. So far, they’ve been vocal in their opposition to the new deal, with some calling for “civil resistance.” Senator Roy Barreras, who’s part of Santos’ negotiating team in Havana, said such calls could be interpreted as “an incitement to harm by neo-paramilitaries and violent groups.”