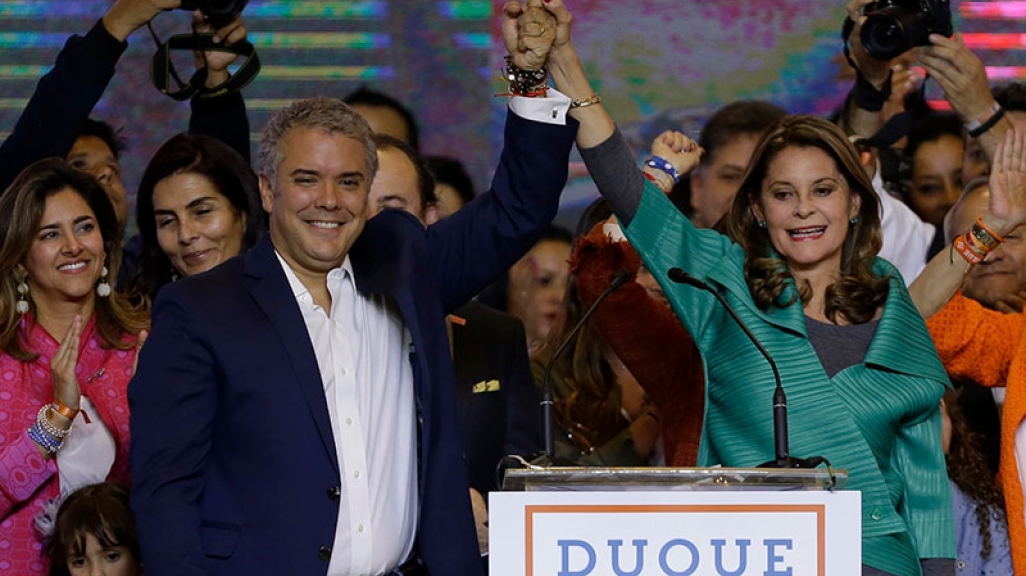 Updated August 8, 2018—Since winning Colombia’s runoff election on June 17, President-elect Iván Duque has been swift to assemble his cabinet. Duque, 41, is the country’s youngest president-elect in modern history, and observers were watching to see whether he would surround himself with other young technocrats who are relatively new to government or seasoned officials affiliated with past administrations. Of particular interest has been the level of power former President Álvaro Uribe might exert during Duque’s tenure, but his potential influence diminished July 25 when Uribe announced his resignation from Colombia’s Senate due to the Supreme Court investigating him for witness tampering and bribery.

So far, Duque’s cabinet is balanced by members with diverse experience. Alberto Carrasquilla will serve as finance minister, a post he held during Uribe’s first term, while Jonathan Malagón, Duque’s pick for housing minister, is a 33-year-old vice president of Asobancaria known for his designation as the country’s best student and one of Latin America’s top 10 young economists.

Duque also avoided some potentially controversial options. Alejandro Ordóñez, Colombia’s former attorney general who was removed from his position in 2016, was seen as a possible cabinet pick, but Duque bypassed him. Gender parity is also shaping up to be a hallmark of Duque’s administration: after running alongside Marta Lucía Ramírez, who will be the nation’s first female vice president, the president-elect committed to building a cabinet with an equal number of women and men.

Here’s a look at some of the people who will be part of Duque’s team. The new president takes office on August 7.

Nancy Patricia Gutiérrez, Minister of the Interior: A specialist in administrative law, Gutiérrez will be the first woman to head the Ministry of the Interior and is also the only woman who has ever been president of both Colombia’s House of Representatives and Senate. Gutiérrez began her political ascent as mayor of Agua de Dios in 1988, before becoming regional director of Colombia’s family welfare agency and working for the governor of Cundinamarca as environmental secretary and secretary-general. A cofounder of the Radical Change party, she has aligned herself with Uribe in the past and, since 2014, has served as president of the Association of Telecommunications Companies, known as Asomóvil.

As the government navigates the aftermath of a 52-year civil conflict with the Revolutionary Armed Forces of Colombia (FARC), Gutiérrez will be charged with the difficult task of developing policies to defend human rights. This has aroused some suspicion, as she was previously investigated for associations with paramilitary actors. Colombia’s Supreme Court closed the investigation in 2014.

Alberto Carrasquilla, Minister of Finance and Public Credit: Carrasquilla was Duque’s first cabinet appointee, and his return to the Ministry of Finance was not entirely unexpected. He worked on Duque’s campaign, and shortly before the election, Duque announced that Carrasquilla would head the economic transition in the event that he won.

In addition to his time in Uribe’s cabinet, Carrasquilla has worked as an economist at the Inter-American Development Bank (IDB)—as did Duque—and Colombia’s central bank. Several challenges await him, including the implementation of the president-elect’s fiscal and economic reforms, an agenda that includes reforming the tax system, and overhauling the state pension program, which may help improve credit rating agencies’ projections for the country. In February, Moody’s changed Colombia’s outlook from stable to negative.

Aside from his experience in government and banking, Carrasquilla has an academic background. He was dean of the Economics Department at Universidad de los Andes and obtained his PhD from the University of Illinois at Urbana-Champaign.

María Fernanda Suárez Londoño, Minister of Mines and Energy: On the campaign trail, Duque called for Colombia to further develop its potential as an oil producer. He picked Suárez Londoño to lead the charge.

Suárez Londoño is a 44-year-old executive vice president at Ecopetrol, the nation’s largest oil company. She also held positions with the Ministry of Finance, the Porvenir pension fund, Citibank, the Colombian bank ABN Amro, and Bank of America.

Energy is crucial to Colombia’s economy. Crude petroleum, coal briquettes, and refined petroleum are among the country’s top exports, and a drop in oil and gas production has been a factor in the country’s tepid growth. By the end of 2017, Colombia’s oil reserves were down to 5.6 years, and Ecopetrol’s were 7.1, compared to an average of 12 years for the world’s top oil and gas companies.

José Manuel Restrepo, Minister of Commerce, Industry, and Tourism: During his time at the IDB, Duque cowrote a book on monetizing Latin American culture. He sees tourism—which has grown 300 percent in the last 12 years in Colombia—as a prime tool to achieve this goal. Restrepo, an economist, financial specialist, and rector of Universidad del Rosario in Bogotá, will lead the effort.

A graduate of the London School of Economics, Restrepo’s past experience includes time as rector at Colombia’s College of Higher Education in Business Administration, known as CESA, and rector of the Business University Foundation of Bogotá’s Chamber of Commerce. His government work involved stints overseeing the budget and financial planning in the National Fund for Development Projects and membership in the Ministry of Education’s National Council for Quality Assurance in Higher Education.

Perhaps as a sign of his desire to encourage visitors, Duque announced Restrepo’s appointment while meeting Colombians who left the country in Florida. In his statement, he highlighted both the economist’s youth and his efforts to form the next generation of young Colombians.

Carlos Holmes Trujillo, Minister of Foreign Relations: On Duque’s first international trips to the United States and Spain as president-elect, he was accompanied by Holmes Trujillo. Initially one of Duque’s rivals to represent the Democratic Center party in the 2018 election and Oscar Iván Zuluaga’s running mate in the 2014 race, Holmes Trujillo has held an array of postings around the world, beginning in Tokyo and with stops as an ambassador or chief diplomat in various European countries and the Organization of American States (OAS), as well as on a special mission to the UN General Assembly. Holmes Trujillo also served as mayor of Cali, in addition to serving as a delegate to the 1991 National Constituent Assemblythat formed the country’s current Constitution.

Among Holmes Trujillo’s objectives will be fulfilling Duque’s desire to pull out of the Union of South American Nations (UNASUR), addressing crises in Venezuela and Nicaragua, and maintaining a relationship with the United States.

Other cabinet appointments include: