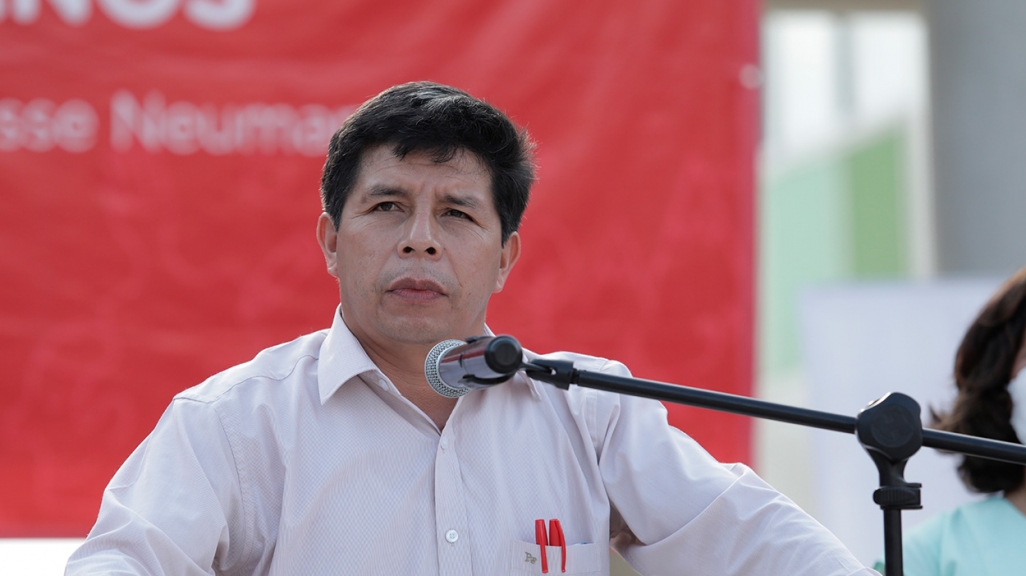 It's been one year since Pedro Castillo was sworn in as Peru's president on July 28, 2021 after winning a runoff vote by a razor-thin margin. A school teacher from the rural Cajamarca region and relatively unfamiliar face, Castillo campaigned under the slogan “no more poor people in a rich country,” pledging to reform the Constitution, improve transportation, and update the national pension system.

But most of his first 12 months in power were spent focused on his own political survival. So far, Castillo has gone through two impeachment proceedings; he witnessed more than 50 changes to his cabinet from him; and has been expelled from his party, Free Peru. He also faces ongoing investigations alleging corruption and links to organized crime.

At the same time, Peruvians are dealing with the highest inflation they've seen in a quarter century and a food shortage crisis amid fertilizer scarcity.All these woes have left Castillo with a 20-percent approval rating —below the levels of four of his elected predecessors at the same point in office.

Since taking office, Castillo has seen his cabinet go through frequent changes, making it hard for him to maintain a stable team.

His initial cabinet included a mix of figures across the political spectrum with varying levels of experience and loyalty. His first prime minister, Guido Bellido, was a prominent figure in Free Peru and has been under investigation for commemorating the death of a leader of the Shining Path, a Maoist terrorist organization that used violent guerrilla tactics in the late 1980s and 1990s. On the other hand, Castillo also appointed moderate economist Pedro Francke as finance minister to appease centrists, helping the president gain legislative approval for his first cabinet.

But a month later, Foreign Minister Héctor Béjar found himself in the spotlight for stating that the Shining Path was the work of the CIA and the Peruvian Navy. He resigned and was replaced by the more conservative Óscar Maúrtua de Romaña. Vladimir Cerrón, head of Castillo’s party, publicly disapproved of the substitution, resulting in one of the first public clashes between Castillo and his party.

Then, in October, Castillo asked Bellido to resign after the prime minister threatened to nationalize oil resources in Peru. In a televised address, Castillo explained this decision was "in favor of governability," as Bellido had only a 33- percent approval rating. However, not all backed this decision. Bellido’s removal again frustrated Cerrón, and he urged Castillo to leave out right-wing politicians from his selection. Out of the 19 ministers in a Peruvian cabinet, seven were swapped out within five months of Castillo’s taking office.

The replacements saw a mixture of Free Peru affiliates and moderate leftists, and the new cabinet featured more women, such as Mirtha Vásquez, a former interim president of Congress, as prime minister. Castillo selected Luis Barranzuela, Cerrón's lawyer, as interior minister. This decision was seen as a conflict of interest, given that Barranzuela had defended Cerrón and other Free Peru members against money laundering investigations.

But a chain of ministerial resignations continued to plague Castillo between November and late January. Members left due to scandals that ranged from hosting a party during a high peak of COVID infections to corruption allegations in the police force. Vásquez, Minister of Interior Avelino Guillen, and Francke all left, criticizing Castillo's capacity to govern. In Vásquez's resignation letter, she said that it was "impossible to find consensus to benefit the country."

Castillo swore in new ministers in early February, marking 10 changes in all. But the selection of Héctor Valer as the new prime minister sparked protests as he faced accusations of domestic violence. Critics also said Valer had limited political experience, having been elected to Congress as recently as 2020. Within a week, Valer quit, meaning Congress didn’t get the chance to approve the new cabinet, and Castillo replaced additional ministers to essentially create a fourth cabinet on February 8.

Castillo made additional changes in May 2022, when he replaced four ministers and in July, when he sacked the interior minister.

In Peru, debate persists about whether a president can face an investigation while holding office. In the country’s Constitution,Article 117 states that a sitting president can be accused and impeached for just four transgressions: treason, preventing elections, dissolving Congress, or impeding other electoral processes.

Despite the existing debate over whether a sitting president can be investigated, during Castillo's first year, he faced five investigations. Two cases involved the awarding of public works contracts to firms involved in the Tarata Bridge project and oil company PetroPeru. Accusations of influence peddling arose against Castillo, his ministers, and his family members. But both cases were suspended by the then-national prosecutor in light of the uncertainty as to whether Article 117 excludes presidents from facing investigation.

Another suspended investigation involved irregular promotions in which Castillo fired the heads of the army and air force after they rejected promoting officials with close ties to the president’s ministers.

Also in May, a separate investigation was launched alleging that Castillo and his wife, Lilia Paredes, plagiarized their co-authored Master’s thesis at César Vallejo University.

In July, another national prosecutor took office and reopened three cases: the Tarata Bridge project, PetroPeru, and irregular promotions cases. Moreover, a separate case against Castillo was launched for obstruction of justice after he removed the interior minister who had created a special team to search for Silva and other fugitives involved in the Tarata Bridge project case.

Aside from investigations, Castillo faced—and survived—two impeachment proceedings in the past year.

The first attempt was in December for moral incapacity and cronyism given that Silva—the same transport minister accused of being involved in a criminal work—had limited government experience beyond provincial ties to Castillo.

The Peruvian Constitution outlines that Congress can declare a president as having moral incapacity but does not clearly define what this constitutes, creating the possibility for it to be applied subjectively. It was exercised to oust Presidents Martín Vizcarra in 2020 and initiated against Pedro Pablo Kuczynski in 2018.

Peru's Congress has 130 members, and to vacate a president from office on grounds of moral incapacity involves two voting sessions.First, at least 26 congressmen have to present the vacancy motion, then 52 votes are needed to move forward. Then a debate is held during which the president offers a defense, followed by a vote. A two-thirds majority—or 87 legislators—is needed to remove the head of state from office. Castillo's first impeachment proceeding reached the second step, but only 46 legislators voted in favor of impeachment.

The second impeachment attempt came in March 2022 and involved moral incapacity as well as corruption after a number of cabinet and family members became embroiled in scandals. This time, 55 members of Congress voted in favor of impeachment—still well short of the two-thirds majority.

But it’s unclear how Castillo would fare should he face impeachment proceedings again, given that he was ousted from and lost the support of Free Peru in June. On top of that, even with the rift between Castillo and Cerrón, the latter was placed under preventive detention for alleged affiliation with terrorism in July, leaving Cerrón’s power in the party in doubt.

The Peruvian president waited until he was half a year into his term to talk with the media. We look at some of his more indicative quotes.

Despite the setbacks of impeachment proceedings and investigations, Castillo has been able to work through some of his campaign promises. In April 2022, he submitted a proposal to fund the construction of a train in Arequipa, pushed to increase transparency in the government by eliminating official immunity, and announced that Peruvians can access their pensions early to alleviate financial problems brought about by the pandemic.

He also attempted to reform the Constitution, but his bill was rejected in May.