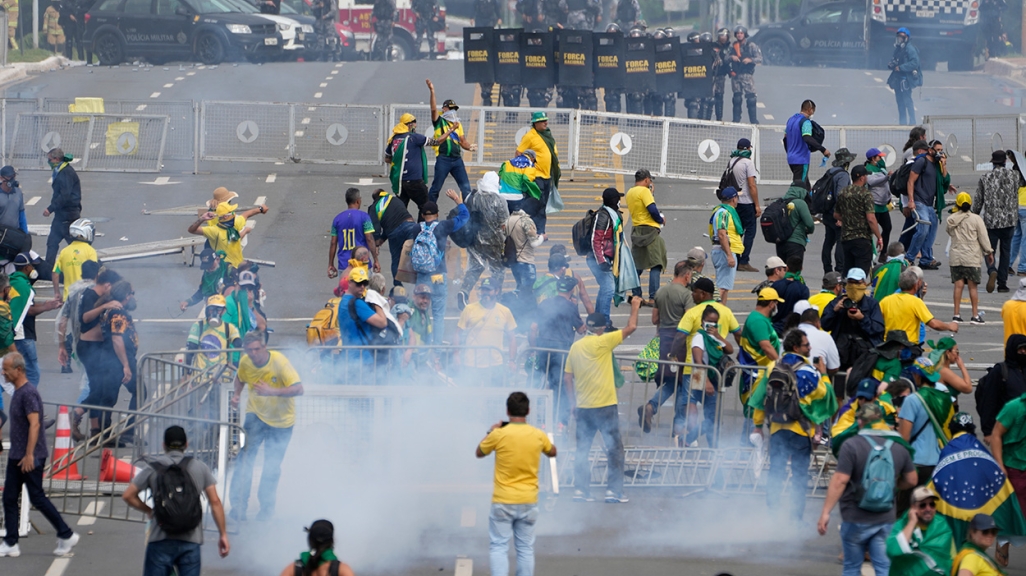 “This could strengthen Lula if he takes this opportunity to bring the different forces in Brazil together,” says AS/COA's senior director of policy.

On January 8, thousands of supporters of former President Jair Bolsonaro stormed the capital of Brasília, occupying and ransacking key government buildings like the presidential palace, the supreme court, and the legislative chambers. The events come just one week after the inauguration of President Luiz Inácio Lula da Silva, who defeated Bolsonaro in the October 30 runoff election. During his campaign, Bolsonaro consistently questioned the legitimacy of Brazil’s electoral system and subsequently contested the results of the election.

“This could strengthen Lula if he takes this opportunity to actually bring the different forces in Brazil together,” says Cecilia Tornaghi, managing editor of Americas Quarterly and AS/COA's senior director of policy. She discusses what this event will mean for Brazil’s new president and how it compares to the January 6 insurrection in the United States.

AS/COA Online: The similarities between the invasion of government buildings in Brazil on January 8 and the U.S. Capitol attack on January 6, 2021 are obvious. Can you tell us what are the differences?

Cecilia Tornaghi: I think there are some very strong and striking differences. First of all, there’s the date. The Brazilian rioters actually picked a week after Lula was inaugurated. In the United States on January 6, they were trying to stop the certification of the 2020 presidential results, but in Brazil's case, the president is already inaugurated, so there is no going back.

On December 12, 2022, Lula’s election was certified by the Electoral Court. That day, there were riots around Brasília. Buses were burned and there was a plot to explode a truck full of fuel next to the airport. Security was heightened before Lula’s inauguration on January 1, 2023. A week later, on this fateful Sunday, Congress was in recess, Supreme Court was closed, and Lula himself was visiting a town that was affected by heavy rains.

So, I think the choice of this date was a very strategic decision because the rioters were trying to sow chaos and make noise, as they did on January 6 in the United States, but they were not necessarily trying to stop Lula from becoming president. It was more like they were trying to sabotage his presidency.

I believe the other main difference from January 6 is that the Americans that invaded the Capitol were there not only supporting President Trump and denying the results of the election, but they had deep beliefs, such as white nationalism. The crowd that entered Brasília was a mixed bag of people, some of whom were paid to be there. There has been clear information that buses were rented. People were not only recruited to go but actually paid to be part of this. So, there were a lot of people there that were going because they supported Bolsonaro, but others who went because they got a stipend or because there was a free bus.

AS/COA Online: Was there also a difference in the actions of the police force that was protecting the U.S. Capitol on January 6, 2021 and the one in Brasília on January 8, 2023?

Tornaghi: The main difference is that the Capitol police tried to stop demonstrators. They put themselves in harm's way—some of them with fatal consequences—to try to protect the Capitol. The police in Brasília did the opposite. There are so many reports and videos of police officers actually helping people get into the buildings.

The legislative police force, which is a small group, was able to arrest some of the attackers, but the police officers that were in charge of protecting these buildings were nowhere to be seen. They basically welcomed the supporters.

The moment the federal government took over the security apparatus, the police and the national forces were able to go in and actually stop the mob. Apparently, some 1,500 people are in custody right now.

AS/COA Online: What does the invasion mean for President Lula's government? Is he going to assert or expand his power?

Tornaghi: I find it difficult to believe that he would strengthen the presidential powers on the back of this event. That said, I believe that he now has way more strength to take this opportunity to actually assert his authority as president. He has said all along that hateful rhetoric was a problem and that it was dangerous, but his remarks were dismissed as a political stunt against Bolsonaro. After January 8 in Brasília, it's clear that hateful rhetoric has consequences. The minister of justice said that "all those anti-democratic tweets gained legs and hands and guns and came to Brasília."

This could strengthen Lula if he takes this opportunity to bring the different forces in Brazil together to give himself a longer honeymoon period. He wasn’t expected to have much of a honeymoon because Brazil is still so divided. This could be his chance to bring in forces that were staunchly allied to Bolsonaro who now want to distance themselves from him.

This longer honeymoon could help with some other efforts of this government like curbing poverty and deforestation and so forth. But the invasion will take away Brazil’s political focus for a while. It might make it more difficult to enact certain reforms and changes, so it really depends on how this week will go.

And that I think that is the most that we can get right now. Extremism is not going anywhere.

Tornaghi: Well, another difference to January 6 is that overnight into the next morning, there were 1,500 people under arrest. There was swift action to criminalize these actions and at least start processing people that were involved. That is the first signal that this type of behavior will not be tolerated, which may curb others from trying the same.

If the government continues this investigation, I think they will get a lot of support from the population as well. This invasion did not play well for Bolsonaro. This was too violent for many people.