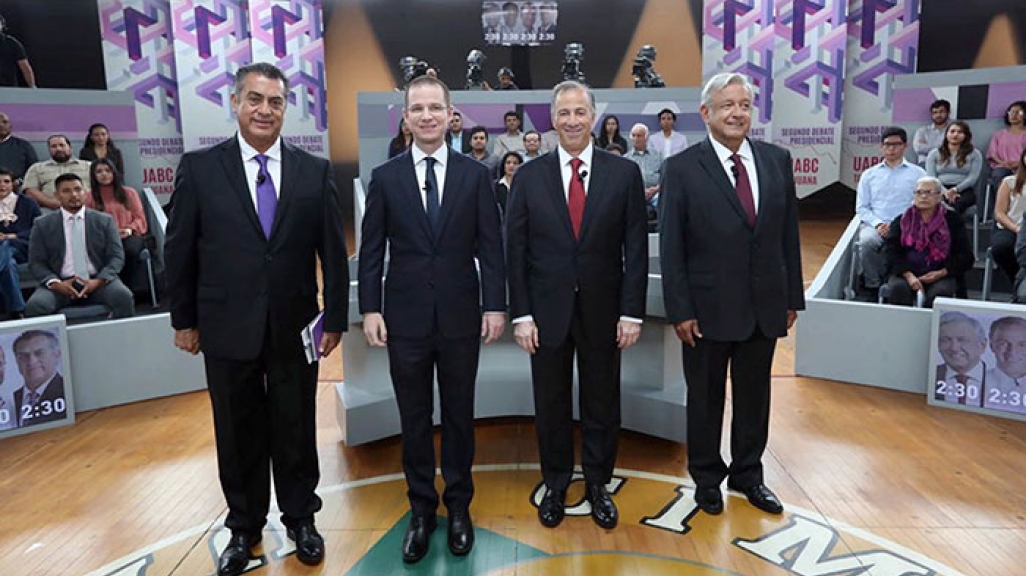 The candidates debated a second time May 20. (AP)

6 Weeks to Go: A Debate, Congressional Shifts, and One Candidate Out in Mexico's Race

We’re down to fewer than 40 days until Mexico’s election.

There are under 40 days to go until Mexico’s elections, and now there’s one fewer presidential candidate in the running. AS/COA’s Carin Zissis writes from Mexico City on the trends defining the races as the competition enters its final weeks.

Check out our Mexico Election Guide and review the prior updates in this series:

The second of three presidential debates: May 20, Tijuana

The debate topics covered trade, border security, the battle against international crime, and migrant rights and, in addition to being moderated by journalists León Krauze and Yuriria Sierra, incorporated a town hall style with questions from Mexican citizens. So what did—and didn’t—the candidates discuss?

The debate took place several days before U.S. President Donald Trump threatened to levy 25 percent tariffs on car imports in a move that strikes at NAFTA partners, but the candidates were already talking about how to deal with a Trump-governed United States. Frontrunner Andrés Manuel López Obrador, often referred to simply as AMLO, said Donald Trump “will have to learn to respect us,” although he agreed with U.S. and Canadian NAFTA negotiating points that Mexican wages should rise. Ricardo Anaya, who polls second, called President Enrique Peña Nieto’s 2016 decision to host Trump—a widely unpopular move in the country—“a humiliation for the people of Mexico.” Governing party candidate José Antonio Meade, who generally polls third, rejected the idea that it was a mistake to host Trump, but also suggested Mexico could look to new trading partners should NAFTA sink. Jaime “El Bronco” Rodríguez, who polls a distant fourth, went a step further and suggested expropriating Citigroup-owned Banamex.

Throughout much of the debate, specific proposals got overshadowed by name-calling, leaving questions unanswered and topics unaddressed. Policy toward Venezuela, which was holding a presidential election widely seen as rigged the same day, never came up. AMLO did note that he would recommend Alicia Bárcena, currently head of the Economic Commission for Latin America and the Caribbean, to be his top ambassador to the UN. Human Rights Watch’s José Miguel Vivanco has criticized Bárcena for denying the existence of the humanitarian crisis in Venezuela.

In another instance, when Krauze asked whether candidates supported open markets or protectionist markets, AMLO instead attacked Anaya on a prior point and called him a liar. At other points, AMLO called Anaya “Richie Rich,” “demagogue,” and “scoundrel” and even at one point pretended to protect himself from being pickpocketed by his top rival. Anaya, in turn, described AMLO as “authoritarian” and told him, “The problem, Andrés, is that you don’t understand the world.”

The candidates: And then there were four

One big difference between the first debate in April and Sunday’s was that the latter had an all-male candidate lineup. That’s because former legislator and ex-First Lady Margarita Zavala, who was running as an independent, dropped out of the race on May 16. Well before the race for Los Pinos officially began—and before Zavala quit the opposition National Action Party (PAN) after more than three decades—she was among the top contenders. But as the competitors became more certain and she struck out on her own, she saw her poll numbers weaken.

Her support fell to single digits, but Anaya and Meade quickly made plays to her supporters after she announced May 16 she would no longer seek the presidency. Although it seems natural her backers would turn to the PAN’s Anaya, he’s seen as the one who blocked her from being the party’s candidate. Moreover, Meade served in the cabinet of her center-right husband, Felipe Calderón. But pollster Javier Márquez of Buendía & Laredo ran the numbers and believes more of her backers would support AMLO than Meade, with the largest portion going to Anaya.

For her part, Zavala has yet to announce an endorsement of any one candidate, despite ongoing rumors that an Anaya-Zavala meeting is being planned, potentially to bury the hatchet.

The shifting shape of Congress

There’s a lot more at stake in these elections than the presidency, and the latest survey of legislative seats by Consulta Mitofsky shows why: the poll gives AMLO’s coalition, led by his MORENA party, 29.2 percent of support in the lower house, compared to 21.4 percent for the PAN-led coalition and 16.9 percent for the governing party’s PRI-led coalition. Independents get roughly 4.5 percent of the votes, and 28.0 percent of respondents did not declare a preference. If the polls are on the right track, this will essentially mean an upended legislature, given that the PRI currently holds the largest number of seats in both houses.

Below are forecasts for both the Chamber of Deputies, which has a total of 500 seats, and the Senate, with its 128 members.