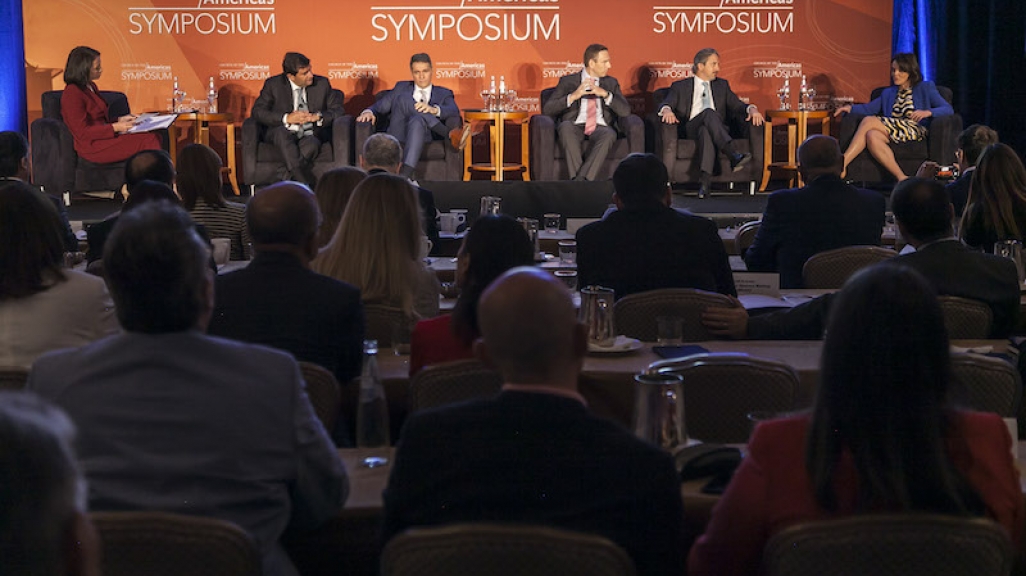 CEOs and business leaders gathered in Miami to share insights on how companies can adapt to a changing world and business climate.

AS/COA President and CEO Susan Segal opened the 2018 Council of the Americas Symposium in Miami. With a theme of “Transforming Latin America: New Strategies, New Leaders, New Markets,” the event gathered business leaders for a spirited discussion on the challenges and opportunities facing companies, societies, and governments in an ever-changing world. “Some companies started out as multilatinas and now have been transformed into global companies,” said Segal. “Many companies have redefined corporate social responsibility by driving businesses with a purpose, and that purpose will impact populations. Still others are overhauling business as usual through innovation and disruptive technologies, reflecting new ways of thinking and new ways of working.”

The first panel convened five CEOs for a discussion on global growth, transformation, and expansion. AS/COA Chairman and AES Corporation President and CEO Andres Gluski asked panelists to share the biggest challenges they’ve faced. Fabio Schvartsman, the 2018 BRAVO Business Awards CEO of the Year, talked about the difficulty of coming to Vale as a mining industry outsider, saying he quickly took steps to gather insights from those around him. CEMEX CEO Fernando González emphasized the need to maintain a consistent identity. “We produce cement using household waste,” said González. “We are contributing to the green economy.”

“In a challenging environment, the advantage we all have, is that we are all Latin Americans. We know how to deal with uncertainty” - Fabio Schvartsman, CEO, Vale
On panel alongside CEOs of Cemex, Votorantim, AES Corp and @Softtek #BRAVObiz pic.twitter.com/ANQ70Q3Jqg

As head of a Mexican IT company, Softtek CEO Blanca Treviño wants to ensure the country is known as a technology hub. Part of this involves attracting the best talent by collaborating with universities and helping employees adapt. While it can be difficult to compete with the Facebooks, Googles, and Ubers of the world, she said, the solution is to create a good work environment.

Asked about black swans, Votorantim’s João Miranda said the trend toward creating barriers will ultimately prove inefficient. “We are about to see the largest transformation in various areas—of knowledge, of production, and of human behavior, all of which point to the direction of more equality, less consumption, more sharing, etcetera.” Schvartsman said he and his fellow panelists are all accustomed to change and that the best response is flexibility. “In a challenging environment, the advantage we all have is that we are all Latin Americans,” he said. “We know how to deal with uncertainty.”

“Latin American companies have a competitive advantage in managing risk.” —Andrés Gluski, President and CEO, The AES Corporation, at the Council of the Americas Symposium #Bravobiz @ASCOA

Forget technological revolution: social skills will be—and in many cases already are—what drive digital culture and innovation in the future. “Empathy is going to be a critical element in what we teach people. At the end of the day, if we don’t have a clear understanding of the impact we have on others, it’s going to be impossible to create an inclusive society,” said IBM’s Ana Paula Assis on the day’s second panel, moderated by Gabriela Frías of CNN en Español. Fernando Iraola of Bank of America Merrill Lynch underscored Assis’ point, adding, “This will be huge in hiring. Technological skills will be a given. What will set you apart are the social skills you have.”

"Is all this disruptive, powerful technology being implemented in a way that's helping society advance and the human race continue its evolution? It's a very fair question."#BRAVObiz pic.twitter.com/6IL2EiZTKM

Microsoft Latin America’s Cesar Cernuda stressed the importance of trust between users and companies. “Don’t be obsessed about your P&L, your revenues,” he said. “Be obsessed about your customers.” Emerson’s Vernon Murray talked about a digital evolution, as opposed to a revolution. “In the past, it was about getting the expert to the data,” he said. “Now it’s about getting the data to the expert.” Gabriel Di Lelle discussed how Bancolombia is working to meet young users where they are, including developing user-friendly 30-second terms and conditions videos and creating a separate mobile-only banking system that already counts 1 million users in Colombia. He also emphasized a need to bring moral standards to tech and data management. “Doctors have the Hippocratic Oath,” he said. “We need the same thing in tech today.”

If governments in Latin America really want to embrace a digital agenda, they need to start with education (paraphrasing) @cesarcernuda #BRAVObiz

What responsibilities do businesses have as social actors? “Purpose is ‘the why’ an organization exists,” said the Boston Consulting Group’s Wendy Woods, who moderated the third panel of the day. In her opening remarks, she cited evidence showing a company’s financial success positively correlates with its environmental and social performance. As an example of how Colombian retailer Grupo Éxito lives out its purpose, CEO Carlos Mario Giraldo Moreno focused on nutrition through his company’s Gen Cero Strategy, citing how the childhood malnutrition rate in the country has dropped from 14 to 10 percent in the last five years.

As head of a tech company, SAP Latin America & the Caribbean President Claudio Muruzábal highlighted entrepreneurship. He gave the example of his company’s One Billion Lives initiative that encourages employees to devise startups that will improve the lives of others. Measurement is important, he said, but “what is more important is changing the culture.” AIC’s Alfredo Zolezzi Garretón talked about the value of partnerships, highlighting how AIC partners with Airbus to put technology in schools in low-income communities. In the future, he is looking to develop socially beneficial apps, technology he says that is ultimately “an excuse” to see transformational change.

“Entrepreneurship is an important way to help us SAP, have an impact in our society and improve people’s lives” @cmuruzabal #Bravobiz @Ascoa #PurposeDriven pic.twitter.com/mW7XtRnViV

Panel IV: “A Conversation on Gender Equality and Inclusion”

While there’s been some progress on gender parity, the pace of change has not been fast enough, agreed a panel of female leaders. One way to speed up the pace is to address implicit bias both in the workforce and at home, and to involve everyone. “Gender is not an issue just for women. Gender is an issue of development, gender is an issue of societies, gender is an issue of the world advancing faster and advancing further,” said Panamanian Vice President Isabel de Saint Malo de Alvarado, who successfully pushed for a new law in Panama that requires women to fill at least 30 percent of board seats in public institutions. Having men buy into the importance of diversity is also a key element, said HSBC’s Katia Bouazza. “The worst thing that could happen right now is for men to retreat.”

Has implicit bias changed over time? These panel of amazing and successful business women discuss the topic of gender equality as an issue of development at @ASCOA Symposium #Bravobiz @s_segal @menendezcambop pic.twitter.com/HFVBWn1HEX