The speakers will discuss select works in Terence Gower: The Good Neighbour, currently on view at Americas Society.

Join us as we host a panel of guests who have previously worked with Canadian artist Terence Gower. Each speaker will focus on one of the works on view at Americas Society's exhibition Terence Gower: The Good Neighbour to discuss their significance.

This event will be free, open to the public, and will be held in English. No registration is required.

Terence Gower was born in British Columbia, Canada, in 1965. He studied at Emily Carr College, spent the early years of his practice in Vancouver, Cologne, and Mexico City, and has continued to show widely internationally. He has been based in New York City since 1995 where he has shown at MoMA PS1, New Museum, Queens Museum, and many commercial and non-profit galleries. His work on the modern movement in Mexico was the subject of a major solo exhibition, Ciudad Moderna, at the Laboratorio Arte Alameda in 2005. His 2009 solo exhibition at the Hirshhorn Museum in Washington, DC treated the history of that institution. Internationally he has shown at Institut d’Art Contemporain Villurbaine, Lyon; MACBA, Barcelona; Tensta Konsthal, Stockholm; Museo Tamayo, Mexico City; MAC, Santiago, Chile; National Gallery of Canada, Ottawa; Haus der Kulturen der Welt, Berlin; MUSAC, León, Spain; and Audain Gallery, Vancouver, and he has participated in the Mercosul and Havana Biennials.

Tatiana Cuevas is an art historian, she completed a Master's degree in contemporary art curatorship at the Royal College of Art in London. In 2004, she received the Hilla Rebay International Curatorial grant from the Guggenheim Foundation. From 2008 to 2011 she was curator of contemporary art at the Lima Art Museum (MALI). Between the samples that she organized during this period, stand out: Gordon Matta-Clark: Undo the space, co-curator of Gabriela Rangel (2009-2010); Art to the step. Contemporary Collection of the Lima Art Museum, in collaboration with Rodrigo Quijano (2011); Fernando Bryce: drawing modern history, co-curator of Natalia Majluf (2011-2012). It is part of the founding committee of the Open Center call. Specific site interventions in the historical center of Lima (2009, 2010, 2012).  She was the associate curator of the Museo Rufino Tamayo Arte Contemporáneo in Mexico City and since 2019 she is the Director of Museo de Arte Carrillo Gil in Mexico City.

José Esparza Chong-Cuy is a curator, writer, and architect from Mexico currently serving as the executive director and chief curator at Storefront for Art and Architecture in New York. Previously, he worked as associate curator at the Museum of Contemporary Art Chicago and the Museo Jumex in Mexico City.

Pablo Landa is an anthropologist and a curator of architecture, urban history, and photography exhibitions. He earned his PhD from Princeton in 2015 and his BA from Yale in 2005. In 2016, he curated Mexico’s pavilion in the Venice architecture Biennale, which mapped social and participatory architecture in the country. His other exhibitions include a retrospective of architect Mario Pani (MARCO 2014; Museo Amparo 2016) and a show on the role of Fundidora Monterrey, a smelting company, in the city’s social and physical configuration (CONARTE 2019). Since 2017, Landa leads Taller Nuevo Norte, which organizes workshops where architects, designers and artists work alongside migrants and refugees. In 2020, he led Puerto Abierto, a cultural program sponsored by Fundación FEMSA that organized art and radio workshops for migrants, developed educational materials for migrant children and women, and established an urban agriculture initiative with refugees who have recently arrived in Monterrey. Since 2018, Landa leads Arquitectura Popular del Noreste, a research project on vernacular architecture in northern Mexico. Among his books is an architecture guide of Monterrey (Arquine 2019), a graphic novel on vernacular architecture (CONARTE 2020), and a book of chronicles about Monterrey’s urban history (Fondo Editorial Nuevo León 2011). 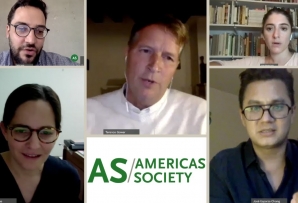 The presentation of Terence Gower: The Good Neighbour is supported, in part, by public funds from the New York City Department of Cultural Affairs, in partnership with the City Council. Additional support is provided by Fundación Jumex Arte Contemporáneo, the Consulate General of Canada in New York, and the Council for Canadian American Relations. In-kind support is provided by LABOR, Mexico City.

Additional support is provided by Fundación Jumex Arte Contemporáneo, the Consulate General of Canada in New York, and the Council for Canadian American Relations.