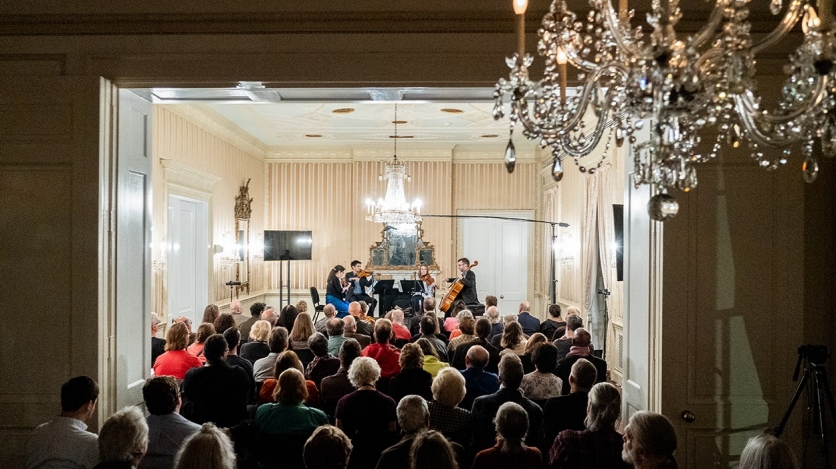 The Quartet is back live as they get ready to go into the studio to record the microtonal composer's complete works.

This concert has been postponed. A new date will be announced soon. We apologize for any inconvenience.

This event will take place in front of a live audience, and tickets are free.

Americas Society will require proof of Covid-19 vaccination for anyone entering our building. All guests will be required to wear masks.

Momenta Quartet is back on our stage after a virtual Festival in 2021 with a program dedicated to the music of Mexican microtonal composer Julián Carrillo (1875–1965). This will the third time the adventurous ensemble brings the music of the most adventurous of Mexican composers to our stage, after concerts in 2011 and 2016.

As they prepare to record all of Carrillo's quartets next June, they join us to share some of these rarely-heard musical gems.

Program (all works by Julián Carrillo)

Momenta: the plural of momentum, four individuals in motion toward a common goal. This is the idea behind the Momenta Quartet, whose eclectic vision encompasses contemporary music of all aesthetic backgrounds alongside great music from the recent and distant past. The New York City-based quartet has premiered more than 150 works, collaborated with over 200 living composers and was praised by The New York Times for its “diligence, curiosity and excellence.” In the words of The New Yorker’s Alex Ross, “few American players assume Haydn’s idiom with such ease.”
The quartet came into being in November 2004, when composer Matthew Greenbaum invited violist Stephanie Griffin to perform Mario Davidovsky’s String Trio for events celebrating Judaism and culture at New York’s Symphony Space and Temple University in Philadelphia. A residency through the composition department at Temple ensued, and the rehearsals and performances were so satisfying that the players decided to form a quartet. Through this residency, Momenta gave two annual concerts highlighting the talents of Temple student composers alongside twentieth-century masterworks and works from the classical canon, and repeated the programs at the Brooklyn Society for Ethical Culture. From the outset, Momenta treated all music equally, devoting as much time, care, and commitment to the student works as to the imposing musical monuments. Word of Momenta’s passionate advocacy for emerging composers spread quickly. Composers started inviting Momenta for similar concerts and residencies at other academic institutions, among them Harvard, Brown, Cornell, and Columbia universities, the Boston and Cincinnati conservatories, and the Eastman School of Music.

Momenta has received two Koussevitzky Foundation commission grants: for Malaysian composer Kee Yong Chong in 2009 and for Bolivian composer Agustín Fernández in 2011, a Barlow Foundation commission for Claude Baker in 2016, a Jerome Foundation grant to commission Eric Nathan in 2013, and a Chamber Music America commission for Alvin Singleton, whose new work will be featured prominently in our 2018–2019 season. Deeply committed to the musical avant garde of the developing world, Momenta has premiered and championed the works of Tony Prabowo (Indonesia), Cergio Prudencio (Bolivia), and Hana Ajiashvili (Georgia).