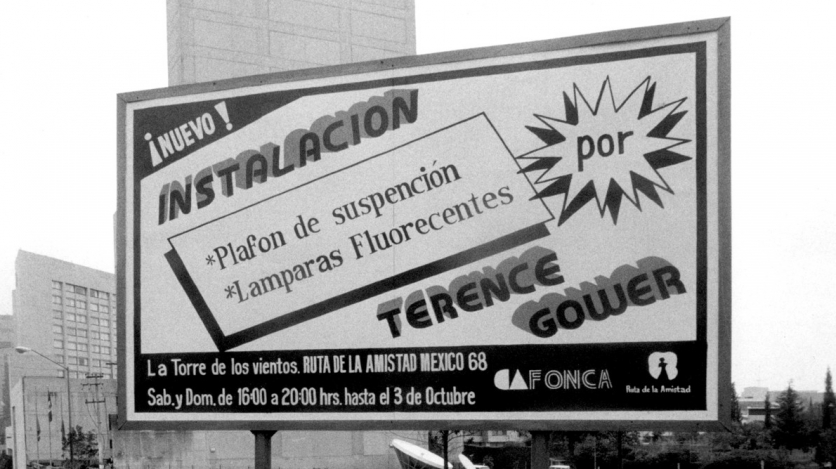 The Canadian artist will discuss his Americas Society show, which focuses on his relationship with Mexico since the early 1990s and is on view from May 12 through July 17.

To celebrate the opening of the exhibition Terence Gower: The Good Neighbour on view at Americas Society starting May 12, curator Aimé Iglesias Lukin will speak with the Canadian artist Terence Gower and the independent curator Julieta González, who contributed an essay for the publication accompanying the exhibition.

Book your visit to Americas Society's upcoming exhibition on view from May 12 through July 17, 2021.

This event will be free, open to the public, and will be held in English. No registration is required.

Terence Gower was born in British Columbia, Canada, in 1965. He studied at Emily Carr College, spent the early years of his practice in Vancouver, Cologne, and Mexico City, and has continued to show widely internationally. He has been based in New York City since 1995 where he has shown at MoMA PS1, New Museum, Queens Museum, and many commercial and non-profit galleries. His work on the modern movement in Mexico was the subject of a major solo exhibition, Ciudad Moderna, at the Laboratorio Arte Alameda in 2005. His 2009 solo exhibition at the Hirshhorn Museum in Washington, DC treated the history of that institution. Internationally he has shown at Institut d’Art Contemporain Villurbaine, Lyon; MACBA, Barcelona; Tensta Konsthal, Stockholm; Museo Tamayo, Mexico City; MAC, Santiago, Chile; National Gallery of Canada, Ottawa; Haus der Kulturen der Welt, Berlin; MUSAC, León, Spain; and Audain Gallery, Vancouver, and he has participated in the Mercosul and Havana Biennials.

Julieta González is an independent curator and researcher who works at the intersection of anthropology, cybernetics, architecture, design, and the visual arts. More recently she has developed research and exhibitions addressing underdevelopment and decolonial aesthetics in Latin America. She has worked as a curator at Tate Modern, Museo Tamayo, Bronx Museum of the Arts, and Museu de Arte de São Paulo.

Aimé Iglesias Lukin is the director and chief curator of visual arts at Americas Society. Born in Argentina, she studied at the Universidad de Buenos Aires and, in 2011, moved to New York, where she completed her MA at the Institute of Fine Arts, New York University. She is currently finishing her doctoral dissertation, This Must Be the Place: Latin American Artists in New York: 1965–1975, at Rutgers University. She has worked at the Metropolitan Museum of Art, New York, and Fundación Proa, Buenos Aires, among other institutions.

The presentation of Terence Gower: The Good Neighbour is supported, in part, by public funds from the New York City Department of Cultural Affairs, in partnership with the City Council.