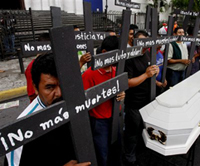 The end of the brutal Central American wars of the 1980s and ’90s —the last time most Americans gave a thought to the region— promised a new era of peace, democratic development and regional prosperity. Yet today, the promise has largely been squandered. Much like Iraq after the first Gulf War and Afghanistan after the Soviets quit, international attention waned just at the time it was most essential. But now the situation is undeniably deteriorating. We are losing Central America. It’s time to fight to win it back.

At the root of Central America’s problem is the geographic reality that, like Mexico, it exists between the world’s largest consumer of illegal drugs, the United States and the world’s largest producer, South America. Under normal circumstances that would be bad enough.

Unfortunately, after the civil wars, insufficient attention was paid to building professional, apolitical police forces, reforming judiciaries, rooting out corruption, building ministries that work effectively and creating economic opportunity fueled by the accumulation of human capital through an intensive focus on broad-based education and training. The local private sector remained self-interested, doing little to lend its voice or resources for fundamental reform.

The region also failed to take full advantage of the promise of its free-trade agreement with the United States, CAFTA-DR, by slow-walking for political reasons the steps it needed to take toward true regional economic integration and a focus on competitiveness. At the same time, the United States contributed to the problem by deporting hardened criminals back to the region who had been thoroughly indoctrinated into gang culture in the United States and its prisons.

This is a potent mix, and governments have largely proven incapable of responding effectively. Without realistic prospects for economic gain, the young and unemployed either attempt the dangerous illegal journey to the United States or throw in their lot with the drug gangs that have proliferated and transformed the region into one of the most dangerous worldwide. Astoundingly, Central America’s homicide rate is more than four times the global average. Corruption and impunity are rampant. The press is self-censoring for its own physical safety in the face of intimidation and gruesome killings of journalists by drug traffickers. Police and security forces are thoroughly penetrated by the gangs, and entire zones such as Guatemala’s huge northern Peten region have little or no government presence.

As the institutions of democracy strain, the specter arises that at some point, perhaps sooner than later, the citizens of the region will seek leaders who promise improved physical security and job creation without the niceties of democracy or a strict adherence to human rights. Given the significant bipartisan effort to midwife democracy in Central America, this would be a major setback for U.S. policy.

Timely, then, that regional leaders including Secretary of State Hillary Clinton met recently in Guatemala to discuss the crisis. As part of an overall effort that approaches $2 billion in pledges, the United States offered some $300 million both in reprogrammed and new money for citizen security initiatives. That is a promising start, an acknowledgement of the seriousness of the issues.

At the same time, several additional steps should be taken that would, arguably, have an even greater positive impact in the region.

No U.S. taxpayer wants to pay to warehouse criminals who are in the United States illegally, but at the very least, deportations of hardened, violent criminals must be better coordinated with receiving countries so that they are not just dumped into unwitting societies unable to integrate them economically or even track them in a way that could reduce a return to crime.

Once returned, offenders have easy access to weapons that most likely have come from the United States, either smuggled across the border or in some cases released from U.S.-provided military stocks by corrupted local personnel. Efforts to prevent gun smuggling must therefore increase. It may be domestically controversial, but our failure to do so for ideological reasons ensures that criminals have the firepower to challenge the state.

Third, the United States must begin to address the drug scourge more effectively, particularly on the demand side. Recently, the Global Commission on Drug Policy chaired by a former Brazilian president and including other regional leaders argued that the U.S.-led war on drugs is a failure. Both the left and the libertarian right rushed to call, again, for legalization. But, as former secretaries Joe Califano and Bill Bennett wrote recently, legalization is no panacea, due to the dramatically increased social and financial costs that would be incurred, and the current presidents of Mexico and Costa Rica and other regional leaders have argued passionately in Washington against the legalization of drugs.

At the same time, there has been virtually no public emphasis on prevention or efforts to reduce demand in recent years. Where, for example, are the media campaigns including new media, celebrity spokespeople, pronouncements from senior officials, the public condemnation of drug use in the same manner as smoking or helmetless motorcycle riding? Where is the effort to show the link between drug use and killings in Central America and Mexico, along the same lines as the campaign the stop the “blood diamond” trade? “Just say no” is not an effective approach, perhaps, but at this point, nobody seems to be saying much of anything.

Democracy is not a fragile flower, as Ronald Reagan once affirmed, but it does require that we fight for it from time to time. Central America is being lost to the drug lords; now is one of those times.

How the 'Art of the Deal' Hurt Latin America's Corruption Fight