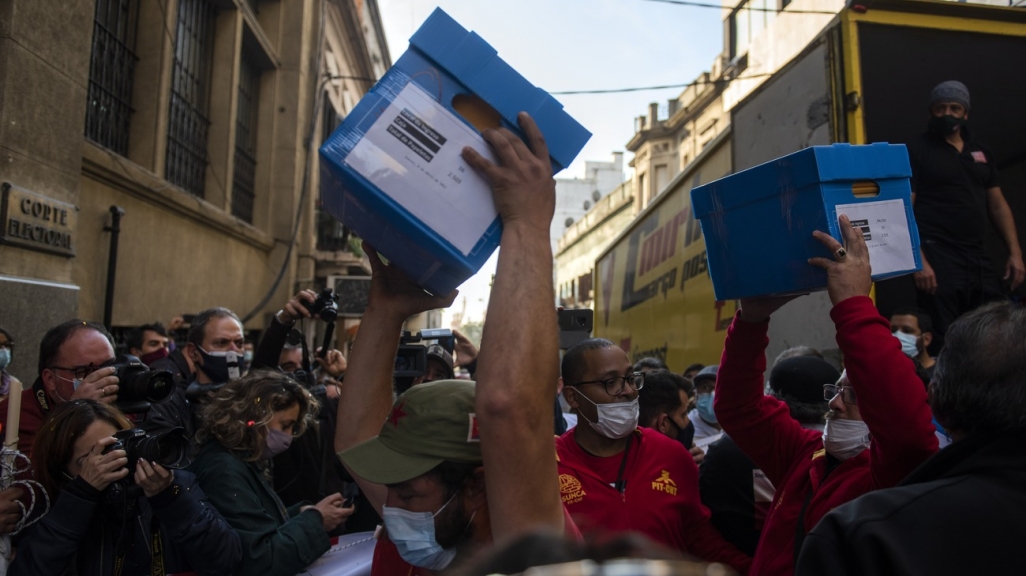 The top issues The outlook for referendum results

Uruguay to Vote in Wide-Ranging Referendum

The opposition-backed referendum on March 27 serves as a proxy midterm for the Luis Lacalle Pou administration, say experts.

Uruguayans head to the polls March 27 for a referendum on whether to repeal part of the Law of Urgent Consideration, or LUC, an omnibus piece of legislation passed in 2020. The LUC has 476 total articles, 135 of which will be up for consideration, covering topics like security, education, fiscal management, and public companies. The referendum is wholesale, meaning all 135 will be struck down if it passes.

Approved in 2020, the LUC is the hallmark reform of President Luis Lacalle Pou, whose victory in the 2019 election ended 15 years of governance by the left-leaning Broad Front (Frente Amplio) coalition. “The referendum is as much about the law as it is a midterm about the president himself,” says Nicolás Saldías, an analyst at the Economist Intelligence Unit. “There’s a lot of partisan division there. It’s about whether or not the government is doing well.” The results—including the margin of victory either way—may determine the extent of Lacalle Pou’s political power for the rest of his term, says Saldías.

The LUC was passed by what’s known as the Multicolored Coalition of right-wing parties that support the president. It executed on one of many focal points of Lacalle Pou’s campaign, namely increasing security measures after record crime rates in 2017 and 2018. The law’s name is a reference to the special type of legislation. In Uruguay, laws of urgent consideration are sent by the executive to the General Assembly with only 90 days allotted for debate. Juan Cruz Díaz, managing director at Cefeidas Group and special adviser to AS/COA, noted that Lacalle Pou “took advantage of his honeymoon” to secure the passage of the LUC.

How the referendum came about

The Broad Front and Uruguay’s powerful unions lead the opposition to the LUC and managed the process of soliciting signatures to prompt the referendum. In Uruguay, a referendum on a law can be triggered up to one year after its passage with the signatures of 25 percent of registered voters. On December 8, 2021, the Electoral Court recognized the more than 671,000 signatures gathered against 135 articles of the LUC and set a data for the referendum. A “Yes” vote signifies that the law should be repealed, while “No” would maintain the law.

With 135 articles on the table, what issues are Uruguayans evaluating?

Security is a top one. The LUC strengthens prison sentences, expands what is considered legitimate self-defense, and tightens drug trafficking laws. It also creates a Secretariat of State Strategic Intelligence within the executive branch that can obtain information from agencies and private citizens without a court order.

LUC provisions also make it easier for the government to dismantle protests if they obstruct movement and protect the rights of non-striking employees during strikes. Díaz says these labor issues have been the most visible in the campaign. “The opposition and the workers believe that the laws limit the right to effectively strike for their own rights,” he says. The security and labor articles represent a more mano dura, or hardline, approach to security, concludes Díaz.

After the LUC’s passage, the UN condemned the law’s security measures for not complying with international human rights standards, specifically around the use of force by the police and the right to assemble peaceably. Saldías noted that there has been a drop in homicides and crime since 2019. Voters, he believes, are hearing the Broad Front’s opposition to these measures and thinking, “You [the party] had 15 years to figure out crime and you didn’t.”

Articles on education also are in the crosshairs. One measure restructured the agencies that manage education, eliminating the representatives within these organizations elected by teachers. This, combined with modifications to teacher training, elicited criticism for weakening teachers’ role in education administration.

Other articles on the referendum chopping block constrain Uruguay’s public companies. This includes a measure that stabilizes the price of gasoline through monthly adjustments, which affects ANCAP, the state-owned oil company. Another measure makes it easier to maintain a phone number while switching providers, which is seen as weakening state-owned telecommunications firm ANTEL.

Díaz highlighted another financial measure that makes it easier for employers to pay their workers in cash. “The argument of the government is that allowing more cash gives more freedom and flexibility,” he said. “The opposition says that this creates the possibility of more abuses than with [banked] salaries. It’s a fight against informality.”

The articles taken up in the referendum reflect Lacalle Pou’s beliefs in liberalization and deregulation, says Díaz. “In every one of these articles, it’s a policy stance and ideological stance that reflects the two big coalitions in Uruguay,” he said.

The outlook for referendum results

Current polling indicates that the “No” side has a slight advantage going into the vote, but it’s far from a runaway. Per the pollster Factum, 41 percent of voters plan to back keeping the LUC in place, 36 percent want to overturn it, and 19 percent are undecided. In the last few days of the campaign, both sides are focused on persuading the high percent of undecided voters, given that voting is mandatory in Uruguay.

Swaying people will be difficult for the opposition “Yes” camp, says Saldías. “They’ve struggled to find a narrative against the Lacalle Pou government. Lacalle Pou is by far the most popular president the country has had since the return to democracy.” He explained that the leader earned high praise from his citizens for his government’s handling of the pandemic, over 80 percent vaccination rate, and steady economic growth over 3 percent.

Ultimately, if the “No” side prevails with a large margin, it will empower Lacalle Pou’s government and he may choose to use his political capital to pass social security reform—the next major item on his agenda. Since “there’s a sense in the region that the moment is favoring the center-left,” says Cruz, if the law is upheld it will mark an aberration for the pattern seen in recent Latin American elections.

Meanwhile, a “No” victory would be a major setback for the opposition. “The unions and the Frente Amplio have put a lot of energy into this campaign,” says Saldías. “They’ve put a lot of political capital into getting these reforms rescinded.”

Either way, the results will offer a preview to Uruguay’s 2024 general elections. The outcome may also affect the composition of both the ruling and opposition coalitions if there is a strong margin in one direction or the other.