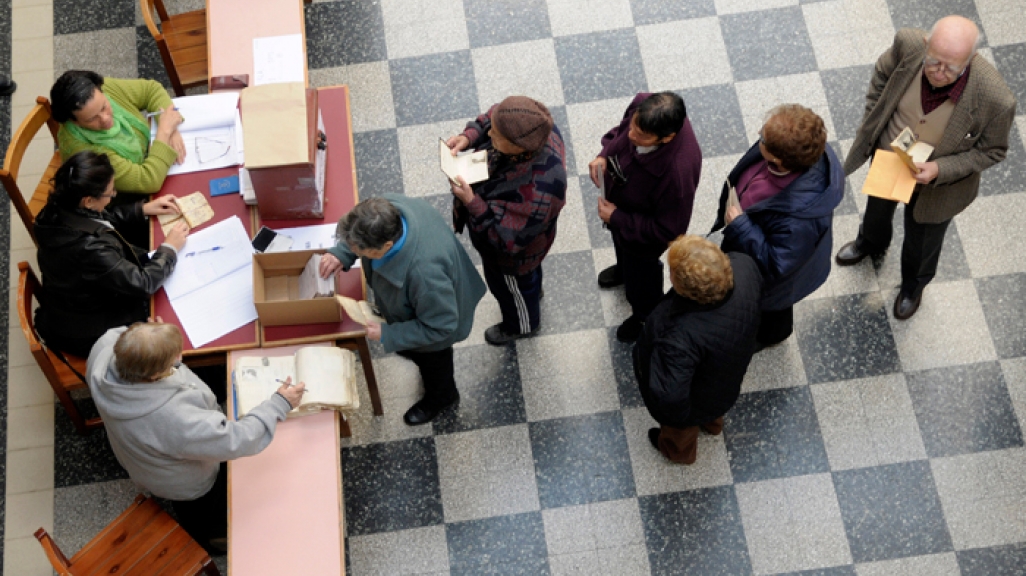 Voters will elect the next president in October. (Image: AP)

After national primaries, a former president and an unexpected opposition leader are among the top candidates for the October election.

The official race for the successor to Uruguayan President José Mujica got underway this month as parties defined the presidential candidates via a national primary on June 1. Ahead of the October 26 national elections, AS/COA Online takes a look at primary results, the main presidential candidates, and the potential campaign issues.

Ten parties participated, and voters cast more than 980,000 ballots, representing 37 percent of the electorate—a historically low turnout for primaries, which are not mandatory. According to Uruguay’s Electoral Court, the main opposition National Party had the highest turnout, with 408,963 votes. The ruling Broad Front received 297,856 votes, and the conservative Colorado Party came in third, with 137,452. Uruguayans will elect the president and vice president, 30 senators, 99 federal deputies, and members of 19 electoral committees on October 26.

During the primary race, Tabaré Vázquez won the Broad Front’s ticket—as polls predicted—pulling in 82 percent of ballots. The National Party victor was a surprise win; Luis Lacalle Pou, who garnered 54.3 percent of the votes, leads the opposition ticket after only five months of campaigning. Pedro Bordaberry will represent the Colorado Party, having earned 74 percent of the party’s vote. Pablo Mieres was the sole contender to represent the Independent Party.

Here’s a rundown of the main candidates:

Tabaré Vázquez: The former president (2005-2010), an oncologist by training who kept practicing medicine while in office, also served as mayor of Montevideo. Tax reforms carried out during his administration offered relief to the working and middle classes. He also made education a priority by creating Plan CEIBAL, a digital inclusion program to increase access to education, which provided one million computers to public school students as of October 2013.

During his term, the number of people living below the national poverty line fell from 34.4 percent in 2006 to 18.6 percent by the end of his term. His government was also marked by improved ties with Asia and a dispute with Argentina over concerns about Uruguayan pulp mills polluting the river dividing the two countries.

Vázquez left office with a 60 percent approval rating and was considered an electoral favorite in a poll by CIFRA conducted in December 2013. After confirmation of his candidacy, Vázquez kickstarted his campaign by listing ten priorities for the country, including education initiatives, infrastructure development, tax reduction, and a national security plan focusing on combating drug trafficking.

Luis Lacalle Pou: With his win considered the primary’s surprise factor, Lacalle Pou snatched up the National Party ticket after a tight race against party leader Jorge Larrañaga. Polls gave Lacalle Pou 35 percent of voter intention in February—a number that grew to 46 percent by May, placing him in a technical tie with his rival. In the end, Lacalle Pou closed 10 points ahead of Larrañaga, who ran against Vázquez in 2004 and was the anticipated candidate for the National Party. At 40, Lacalle Pou is the race’s youngest candidate, and the son of ex-President Luis Alberto Lacalle (1990-1995). He serves as a three-term federal deputy of the Canelones department.

Lacalle Pou represents a new sign of vitality for the National Party, as the party gathered the greatest number of votes in the primaries. He ran a campaign focused on innovation and inclusion and adopted a positive tone. Lacalle Pou built up support by creating a coalition inside his party known as todos hacia adelante (“everyone forward”), saying that his candidacy “will be one of action and not just reaction.” In an effort to unite his party, he said that his vice presidential choice should be suggested by and agreed upon with Larrañaga.

Pedro Bordaberry: The son of former president and dictator Juan María Bordaberry, this candidate will represent the right-wing Colorado Party. Bordaberry’s campaign, led by an initiative called Vamos Uruguay (Let’s Go, Uruguay”), focuses on education and agriculture, among other issues. After the primary results, the candidate said the elections saw a low turnout because the campaigns were too focused on the candidates and not their proposals. He said the country voted for “a new leadership, which means not just switching names, but doing things differently.” Shedding light on Lacalle Pou’s unexpected victory, he said that voters showed they are eager for change and that his vice presidential pick should be younger than he is (54).

Pablo Mieres: The sociologist, lawyer, and professor started his political career in 1979 with Uruguay’s Democrat Christian Party, which is part of the Broad Front coalition. He was the sole candidate for the Independent Party and served in the Education and Culture Ministry between 1995 and 1996. He was also served as a deputy for Montevideo in the National Assembly. In his electoral proposals, Mieres outlines controlling public spending, as well as opening the economy to foreign direct investment to develop industries such as mining, manufacturing, and infrastructure.

Security could become the central issue of the presidential race this year. Although Uruguayans will be busy with the World Cup for the next month, insecurity has been mentioned by all candidates in their campaigns and is considered a main concern for the country.

A survey by Equipos MORI based on keywords about the best and worst aspects of the current administration found that "insecurity" and "delinquency" rise to the top in terms of areas that have been mishandled. Mujica’s approval ratings run at 52 percent but security has been a source of criticism, considered the main negative aspect of the current administration. Uruguay has experienced a growing number of robberies (8.5 percent more between 2012 and 2013, compared to a 2.7 increase during the previous period). The Uruguayan public also disapproves of the current administration’s policies of releasing prisoners with less than 60 days left of their sentences and pardoning people under age 28 who committed misdemeanors for the first time. Moreover, only 24 percent of the public approves of the president’s marijuana legalization policy.

With the focus on security as a top issue, Uruguayan voters will decide via referendum whether to reduce the age people can be criminally charged as adults from 18 to 16 years old. A survey by CIFRA shows 58 percent of voters support the age reduction.

Education will likely be another major election topic, and all candidates have publicized their proposals to reform the public education system. A CIFRA survey shows that the number of people who think education needs a large number of changes increased from 48 percent in March 2013 to 57 percent in February 2014.

During the primary campaign, Vázquez suggested dedicating 6 percent of the country’s GDP to education. Lacalle Pou’s education plan includes creating charter schools (public institutions managed by private initiatives). He proposes decentralizing the public education sector and changing the evaluation system. Bordaberry made education a top priority, and his coalition has published a document with 50 proposals to improve the public education system. He proposes bills that would guarantee a school year of 200 days, more government control over the country’s educational councils, and the creation of community education centers managed by civil society. Mieres has criticized the education legislation approved during Vázquez’s administration and proposes changing the law to allow more autonomy, increase parents’ involvement, restructure curricula, and boost workforce development.