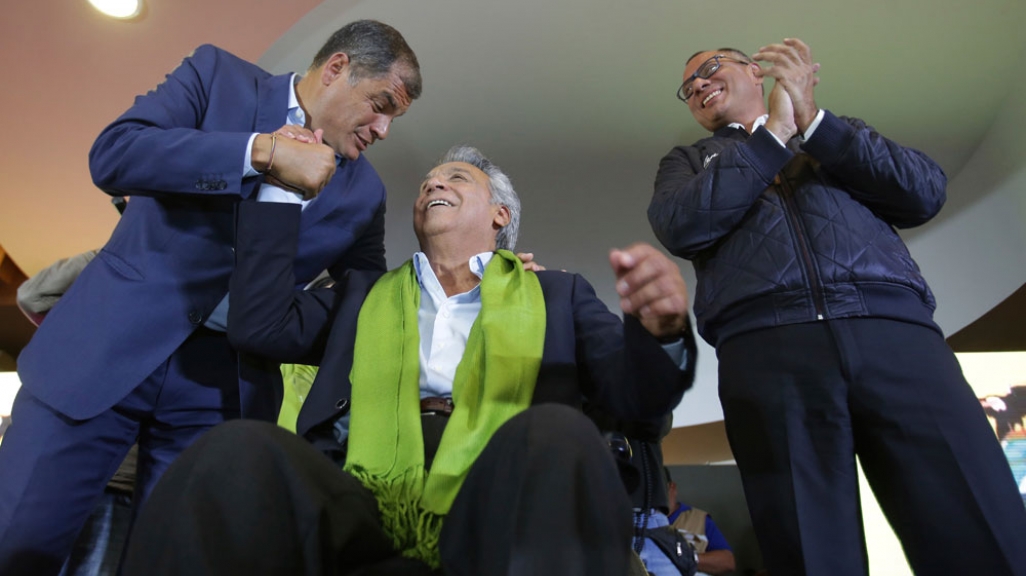 Updated, April 4 — Ecuador’s presidential race was a dead heat leading right up to the April 2 runoff between former Vice President Lenín Moreno and ex-banker Guillermo Lasso. The outcome proved to be a close call, but on April 4, Ecuador's National Electoral Commission (CNE) certified that Moreno, who served under President Rafael Correa, eked out a narrow win.

Here’s what you need to know about Ecuador’s second-round presidential vote.

1. It took two days to certify, but Moreno’s win is now official.

More than 10 million Ecuadorans voted in the presidential runoff between Moreno and Lasso. With 99.65 percent of votes counted by Tuesday afternoon, Moreno led with 51.16 percent of the vote over Lasso’s 48.84 percent. This gave Moreno a 230,000-vote lead over Lasso and fewer than 38,000 votes left to be counted.

2. Lasso is claiming fraud and refuses to concede.

But Lasso is not conceding yet, citing fraud in the official results after exit polls showed him with the lead. When a Cedatos exit poll showed Lasso with a 53 to 47 percent edge over Moreno on Sunday afternoon, the candidate claimed victory and celebrated the results. Lasso allies also cited exit polls from Market and Informe Confidencial also showed the former banker with a 3- to 4-point lead over the ex-vice president. But as the night went on, official results started to come in that showed Moreno was, in fact, leading. Later, a Perfiles de Opinión exit poll showed Moreno up 52 to 48. A state-owned newspaper published reports in mid-March that a group that advises the bank Lasso used to direct paid for certain Cedatos election polls, though the Gallup-affiliated firm is widely regarded as independent.

During the runoff campaign, the attorney general’s office briefly retweeted a Moreno campaign event, and Lasso cited this and other instances as evidence of state tampering and fraud in elections in a letter to OAS Secretary General Luis Almagro during the week before the vote.

But on April 3, the OAS released a statement saying its observation mission found no instances of fraud in the election, and moreover, that it "regrets the political use made of exit polls that were published minutes before the voting had closed," and urged any challenges to the results to be conducted through legal channels. It also came out that the Informe Confidencial exit poll did not in fact take place.

3. Ecuador is set up for a tense week.

Lasso continued to tweet throughout Sunday night and Monday morning, citing examples of alleged fraud and urging his supporters to “peacefully” demand transparency from the CNE. On Monday morning, the top Twitter trends included both Lasso and Moreno’s names, #LenínPresidenteDeTodos (#LenínPresidentforAll) and #LenínNoEsMiPresidente (#LenínIsNotMyPresident), some of the polls in question, and a simple #FRAUDE or “fraud.”

Unrest followed in the days after the February 19 first-round vote, as the CNE took three days to certify the official results. The U.S. Embassy in Ecuador’s statement on the runoff was a March 31 warning of election-related violence.

Moreno, for his part, is taking his win as a done deal and looking ahead to his administration. An April 3 tweet from Lasso read: “The fight continues, friends. We will not lower our arms for one second.”

4. It’s a much-needed win for beleaguered Correa and his allies—including Julian Assange.

On Sunday evening, as official results tilted more and more toward a Moreno victory, the congratulations started coming in on Twitter from Correa’s supporters. Venezuelan President Nicolás Maduro and other state officials were full of praise, and Bolivia’s Evo Morales tweeted, in a reference to the trade and cooperation bloc created by Hugo Chávez and Fidel Castro in 2004: “We ALBA countries are small but share much history and principles, as did our anti-colonial ancestors. Another world is possible.”

Julian Assange, meanwhile, trolled Lasso, tweeting, “I cordially invite Lasso to leave Ecuador within 30 days (with or without his tax haven millions) #AssangeSILassoNO.” The tweet was a tongue-in-cheek carbon copy of Lasso’s plan to, within 30 days of taking office, ask Assange to leave Ecuador’s embassy in London, where he’s been holed up for the last five years. Correa granted the WikiLeaks founder asylum in the embassy in 2012 to avoid extradition to face sexual assault charges in Sweden. Assange’s tweet also references a scandal that embroiled Lasso in the final two weeks of the campaign over claims the former Bank of Guayaquil head held tens of millions of dollars in offshore accounts.

5. In a weekend of heavy news from South America, Ecuador vote got drowned out.

In the 48 hours before Ecuadorans headed to the polls, a mudslide killed hundreds in neighboring Colombia, protestors in Paraguay stormed and set fire to Congress and police shot and killed a student activist, and Venezuela’s Supreme Court reversed a couple of controversial decisions that’d sent the country into a constitutional tailspin. By Monday evening, the presidents of Argentina, Chile, and Peru had all tweeted their congratulations to Moreno. Brazilian President Michel Temer, meanwhile, congratulated the Ecuadoran people for their "commitment to democracy," but did not mention Moreno's name.