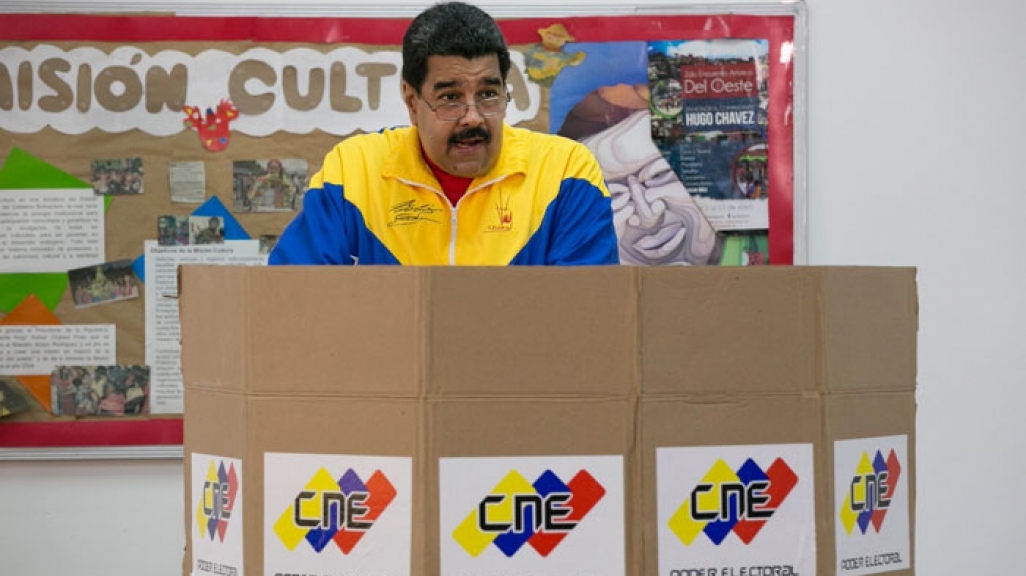 Chavistas could lose control of the legislature.

Which seats are up for election?

On December 6, Venezuelans will elect all 167 deputies to five-year terms in the country’s unicameral National Assembly. Per the polls, opposition parties stand to wrest away a majority from the chavista ruling party for the first time since it came to power 15 years ago. Working in the opposition’s favor is high public dissatisfaction with President Nicolás Maduro’s administration amid an economic crisis.

The country has a mixed proportional voting process. Voters select about two-thirds (113) of deputies directly to represent the country’s 87 districts. Of these, 66 districts are represented by one deputy, 16 by two, and five by three. Candidates running on party lists will fill an additional 51 seats, allocated based on the winning party’s margin of victory over opponents. Three more deputies will be elected from indigenous groups.

More than 19.5 million Venezuelans are registered to vote on December 6, according to the National Electoral Council. Some 100,000 Venezuelans living abroad are not able to vote in legislative elections, since voters need to reside in the municipality in which they vote, per a 1997 law. In the 2012 presidential elections, expats voted for the opposition candidate by a factor of 9 to 1. About 3 in 4 voters told pollsters they’re “sure” they’ll vote on Sunday; 2 in 3 voters turned out for the last legislative elections in 2010. Voting is not mandatory in Venezuela.

What are people watching for?

Because of Venezuela’s proportional system, experts are wary to say how polls on public opinion will translate to seats in the Assembly. “The scenario of a very, very strong result [for the opposition] is possible,” Datanalisis Executive Director Luis Vicente León told AS/COA Online recently, and yet, “No one can be completely certain.” The big question for many is not whether the opposition will nab a majority in the assembly, but how big it will be.

With a simple majority, the opposition could conduct the regular business of passing laws and approving budgets, though the executive would retain veto powers. The country’s Supreme Court, according to legal expert José Miguel Vivanco, has “no judicial independence” from the executive, as the president regularly appoints judges to provisional terms. With a three-fifths majority, the opposition could censure the vice president and ministers. With a two-thirds supermajority, the Assembly would be able to amend the Constitution and remove Supreme Court justices.

People are also closely monitoring violence in the country as Election Day approaches. On November 25, opposition candidate Luis Manuel Díaz was shot and killed at a campaign rally in the state of Guarico, while activist Lilian Tintori—wife of imprisoned opposition leader Leopoldo López—stood a few feet away onstage after giving a speech. Authorities arrested three members of a local gang on November 30, saying the men were responsible for the crime but did not specify charges.

What are world leaders saying?

Chilean Foreign Minister Heraldo Muñoz condemned the assassination of the opposition candidate. British Prime Minister David Cameron and Spanish President Mariano Rajoy also denounced the violence, as did the Union of South American Nations, which will monitor the elections.

Among U.S. presidential hopefuls, Democrat and former Secretary of State Hillary Clinton said she was “outraged” over Díaz’s assassination. Republican Jeb Bush—who lived in Venezuela for two years when he was in his twenties—called out the Maduro administration for “intimidating” the public. Fellow Floridian Republican Marco Rubio is an outspoken critic of Maduro and decried the country’s deteriorating human rights situation in recent weeks.

Maduro, for his part, said that the international community was making a scandal out of what was “a fight between mafia hitmen,” saying that Díaz had been tried for extortion and murder, among other things. “May he rest in peace, but that’s the truth,” he said days after the incident.

Argentina’s President-elect Mauricio Macri made waves during his campaign when he said he would propose to expel Venezuela from the Mercosur trade group, citing the bloc’s democratic clause. Brazilian President Dilma Rousseff, however, indicated she would not support such a move, nor would Ecuador and Uruguay.