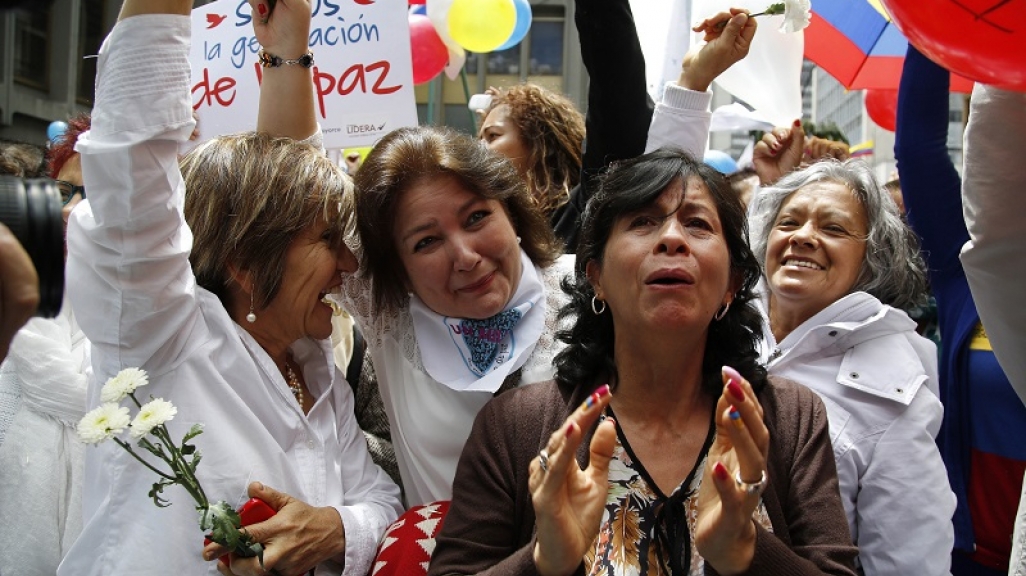 Update: With Ceasefire Deal, Colombia on Verge of Peace with FARC

The June 23 announcement was historic, but there is still work to be done.

On June 23, the Colombian government and the Revolutionary Armed Forces of Colombia, aka the FARC, held a joint press conference in Havana to announce they’d reached an agreement on a bilateral, definitive ceasefire. The move has the potential to end 52 years of internal armed conflict.

Although a few items still need to be ironed out before inking a final peace agreement, the announcement included milestones that inched Colombia and the FARC ever closer to a final deal. Here is what was agreed to and what is left to be done.

Agreements on Disarmament, Protecting the Demobilized, and Making It Legal

Three main agreed-upon items were announced: 1) how the FARC will disarm 2) security measures for demobilized FARC fighters, and 3) how the peace process will be validated under Colombian law. The first two fall under the larger so-called “end of conflict” point, and the third under that of implementation.

On the first item, the FARC agreed to hand weapons to the UN in three phases over a period of 180 days that will begin the day the final agreement is signed. The UN will then melt down the weapons to construct three peace monuments.

This process will be carried out in 22 demobilization zones. FARC members will gather in these zones and begin their reintegration into civilian life, attending classes, receiving national IDs, and participating in “other activities necessary to smooth the transition toward life in legality,” per a joint press release.

The demobilization zones will be in rural areas, and armed forces and local police will be allowed to be present as long as they are not armed. (Many guerrillas are concerned with retaliatory attacks by armed forces once they turn in their weapons, as happened in the past.) A one-kilometer buffer area, where the presence of both the armed forces and ex-rebels will be prohibited, will also surround the zones.

Both sides agreed that international verification of the peace accord’s implementation will be overseen by the UN and representatives from the Community of Caribbean and Latin American States (CELAC), along with members of the Colombian government, armed forces, and former FARC.

As for the second item, the Colombian government agreed to create a special investigative unit inside the public prosecutor’s office to combat neo-paramilitary groups (such as the so-called “Grupos Armados Organizados,” or “Bacrim”) that might attack demobilized FARC members. The Colombian government also consented to protect those FARC members by creating a special division within the Interior Ministry’s National Protection Unit to be tasked with providing bodyguards and secure vehicles.

Finally, the FARC agreed to abide by the legal mechanism by which the final peace agreement will be validated. The Santos administration is pushing for a plebiscite, which Congress has already approved, although it’s under review by Colombia’s Constitutional Court. FARC negotiators previously wanted the final peace deal be ratified through a constituent assembly, which government negotiators opposed, saying that that would mean rehashing every point in the deal.

The budget for peace—and the new agencies created to implement it and funding to secure it—have yet to be set. The Colombian government has secured $575 million from the European Union, $450 million from the United States, and an initial $31 million from the UN to fund peace and post-conflict efforts. For its part, the FARC—which The Economist says is worth some $10 billion although others dispute that figure—has not committed any funds yet. Timochenko suggested that the Colombian state should have enough money if they take it from the defense budget.

One of the most divisive issues is still to be decided: whether or not the FARC will get special and automatic seats in Congress for the next legislative elections, to be held in 2018. Political participation—and the conversion of the FARC from a rebel group into a bona fide political party—is one of the six main points to the negotiations. Other pending items include the number of judges working on the special tribunals to try ex-fighters and exactly how will they be elected to the bench.

Obstacles beyond the FARC

Santos’ government will still have to deal with a few bumps in the road before realizing a full peace agreement with the FARC. The first will be the July 20 deadline that Santos set earlier this week to sign a final peace deal. The date is less than a month away, but is significant: it is both Colombian independence day and the day all presidents and the new vice presidents of Congress take their oaths. An initial March 23 deadline for the peace deal came and went earlier this year.

The government will also have to face adverse criticism from differing parties, mainly the Democratic Center, the party of former President and current Senator Álvaro Uribe, who has led congressional opposition to the peace agreements. That influence might extend beyond Congress, as public support for the peace process has wavered. That said, in the latest public opinion poll published by Datexco on May 31, 68 percent of those asked said they would vote in the plebiscite, of whom 57.2 percent said they would vote to approve the peace agreement. The plebiscite will need a simple majority of votes to pass and participation of at least 13 percent of the population—an estimated 4.4 million people—to approve the peace process.