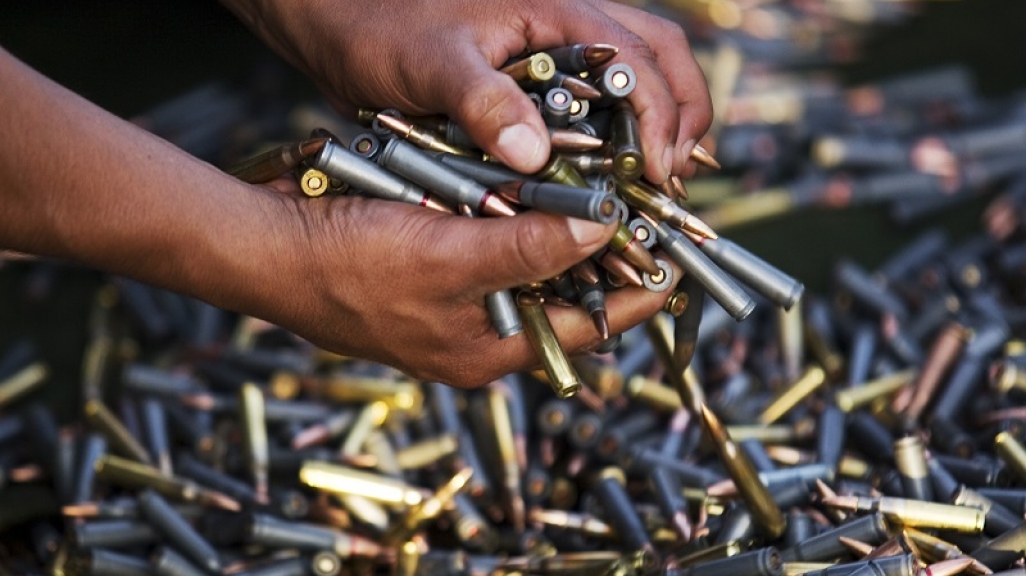 United States and Mexico Look to Clamp Down on Arms Smuggling

After a day of turmoil in Culiacán, the two countries are discussing how to slow the illicit flow of weapons into Mexico. AS/COA's Carin Zissis looks at challenges on the ground.

Burning trucks, shootouts, a prison break: images coming out of Culiacán on October 17 made the capital of Mexico’s Sinaloa state look like a war zone. Clashes took place when authorities sought to capture Ovidio Guzmán, who faces a U.S. extradition request and is the son of the Sinaloa Cartel’s Joaquín “El Chapo” Guzmán, currently serving a life sentence in the United States. At least 13 people died in the turmoil, and the government opted to release Ovidio to stanch the violence, with President Andrés Manuel López Obrador, or AMLO, saying the next morning in his daily press conference: “The capture of one delinquent isn’t worth more than people’s lives.”

Questions remain about what went down in Culiacán—and why—but we do know that AMLO had a call with Donald Trump about it over the weekend. The Mexican president said his U.S. counterpart voiced “solidarity” and agreed to seek ways to stem the flow of weapons across their shared border. Then, on October 21, a high-level bilateral meeting took place in the Mexican capital, including Mexican Foreign Minister Marcelo Ebrard, Security Chief Alfonso Durazo, U.S. Ambassador to Mexico Christopher Landau, and U.S. Drug Enforcement Agency representatives. Ebrard subsequently tweeted that, with the AMLO-Trump call, there would be a “before and after” when it comes tackling arms smuggling to Mexico.

The scope of the illegal arms trade

While details of the two governments’ plan to work together on this issue have yet to be revealed, we do know that it’s been dubbed “Operation Frozen.”

We also know that Mexico has sought U.S. support to stop arms smuggling for years. In 2012, then-President Felipe Calderón unveiled a billboard made of seized guns near the U.S.-Mexico border proclaiming “No more weapons” in all caps. The idea of the two countries working together on this matter isn’t new: earlier in the government of Calderón—who started an all-out war on organized crime groups in 2006—the Obama administration talked of “shared responsibility” in battling transnational crime, with illicit arms trafficking a major point of concern. Before that, the George W. Bush administration launched the $1.4 billion Mérida Initiative to battle organized crime in Mexico and Central America.

In fact, this week’s meeting wasn’t even the first time the two countries tried to tackle the issue since AMLO took office late last year. In July, Ebrard said a bilateral plan was underway to take on arms smuggling. At that point in the year, assault rifle seizures in Mexico were up 122 percent.

There are roughly 64,000 gun dealers across the United States. But there is only one gun store in all of Mexico. Located in the capital on an army base, the shop, which doesn’t sell assault rifles, sold close to 16,000 weapons last year. It’s thought that some of the illegally circulating guns in Mexico have been conveniently “lost” by police or armed forces. But, as The Los Angeles Times reported in September, roughly 70 percent of more than 132,000 weapons seized between 2009 and 2018 came from the United States.

How to get the job done?

One challenge to making progress to stem the flow of arms is that doing so would require stricter gun laws in the United States, such as expanding background checks, clamping down on middleman straw purchasers, or enforcing greater control over sales at gun shows. But if the rise in mass shootings in the United States hasn’t led to increased gun control, it’s questionable that the rise in Mexico’s homicide rate will either.

Then there’s the sheer economics of the situation. Assault weapons purchased in the United States can sell for three times as much in Mexico. Americas Quarterly reported that, from 2010 to 2012, 2.2 percent of U.S. domestic firearms sales went south, amounting to $127 million in cash for American gun sellers.

While we wait for Operation Frozen details—beyond bilateral intelligence-sharing and regular meetings—we know the plan got its name from the goal of freezing illegal smuggling across the border. Also, Landau suggested there are too many agencies involved in the issue and that "debureacratization" would start immediately, though details remained unclear at the time of this report.

The mood on the ground

As smoke rose over Culiacán last week, news outlets and social media platforms widely circulated an image of cartel members riding a gun truck with a U.S.-manufactured .50 caliber M2 machine gun. Overall, the events in Sinaloa left many in Mexico with the sense that authorities are outmanned and outgunned. A Reforma poll found that 56 percent of respondents see organized crime groups as stronger than the government, compared to 33 percent who see the government as the more powerful entity. Another 68 percent see organized crime as stronger after what took place in Culiacán.

More bad news came out over the weekend: official figures now show that there have been more than 29,600 murders in the first 10 months of AMLO’s presidency, making it the deadliest start to a presidential term ever registered in Mexico. Still, an El Financiero poll showed his approval figures resisting a “Culiacán effect” and staying strong at 67 percent, despite more than half of those polled describing it as a mistake for the government to let Ovidio Guzmán go free.