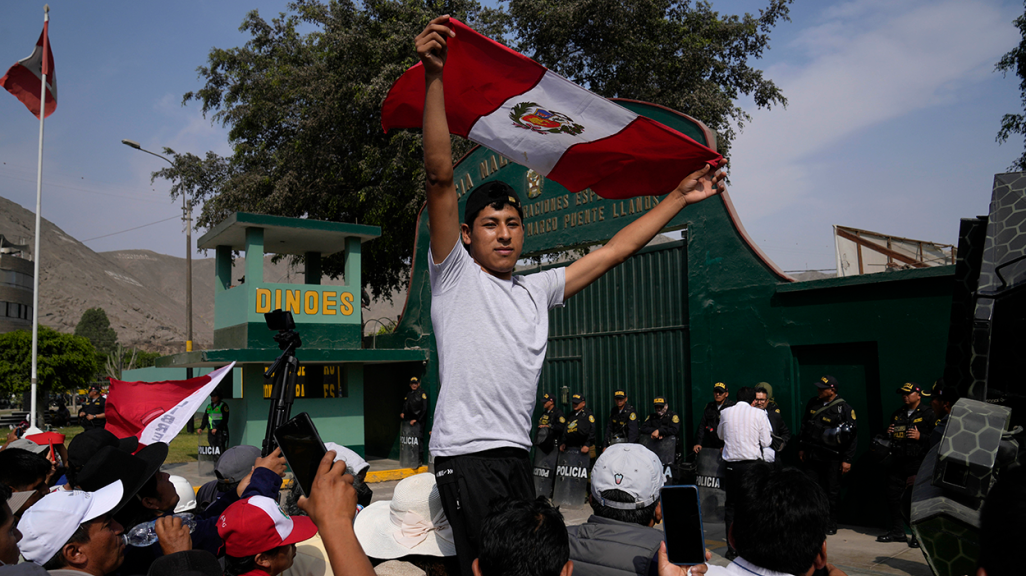 Ex-President Castillo's supporters gather outside the police station where he is held. (AP)

By Jon Orbach and Jennifer Vilcarino

This timeline was initially published December 14, 2022 and has since been updated.

Between an impeachment, a new president, and a nationwide state of emergency, a lot has happened in Peru since former President Pedro Castillo tried to dissolve Congress on December 7. AS/COA Online covers the events marking the December 2022 political crisis.

December 7: Hours before what was to be his third impeachment hearing, Castillo announces he will dissolve Congress and install an emergency government. But, with a lack of government and military support, his maneuver fails, and the impeachment process goes ahead. Lawmakers vote 101 in favor and 6 against with 10 abstentions.

After being removed from power, Castillo seeks to escape to the Mexican embassy, per a Peruvian prosecutor, but gets stuck in Lima traffic. Authorities detain him and charge him with rebellion and conspiracy. That night, they transfer him to the same prison that holds ex-President Alberto Fujimori (1990–2000), who dissolved Congress in 1992 in a self-coup.

Castillo’s vice president, Dina Boluarte, gets sworn in as leader and becomes the country’s first woman president—and its sixth president in as many years.

Leaders worldwide respond in a range of ways, from countries such as Spain and the United States rejecting Castilo’s actions and voicing support for Boluarte, to the presidents of Colombia and Mexico defending the ousted leader.

Upon the arrest of Castillo, supporters start protesting.

December 10: Boluarte swears in a new cabinet of eight women and nine men.

December 11: Protests build in southern Peru as demonstrators in Arequipa, the country’s second-most populous city, and the city of Cusco make their way to the capital.

December 12: Boluarte suggests moving elections forward by two years to April 2024. This follows the deaths of at least seven pro-Castillo protesters over the past two days in mostly rural parts of the country.

The governments of Argentina, Bolivia, Colombia, and Mexico release a joint statement expressing their concern over Castillo’s removal from office as a violation of voters’ democratic will. As of this date, none of these four governments have recognized Boluarte as Peru’s president.

Authorities shut down Arequipa’s airport, saying it had been overtaken by Castillo supporters.

Castillo pens a letter to Peruvians in which he calls his former vice president a “usurper” and tells the public not to fall for her “dirty game of new elections.”

December 13: Supreme Court Judge César San Martín Castro denies Castillo’s appeal to annul the preliminary arrest against him and to drop the charges.

December 15: The death toll of clashes between pro-Castillo protestors and police jumps from 11 to 18, reports say, making December 15 the deadliest day since Boluarte’s introduction. Most deaths occur in the southern, majority-indigenous provinces of Apurímac and Ayacucho. International and local human rights groups accuse the police of using “excessive force” in certain instances.

Supreme Court judge Juan Carlos Checkley sentences Castillo to 18 months of preventive detention for acts of rebellion and conspiracy. Castillo writes another letter from behind bars, accusing foreign powers of collaborating to remove him from office to advance mining interests.

Boluarte institutes a curfew in 15 provinces across Peru for a minimum of five days. Residents of the provinces affected who leave their houses during curfew risk detention. The Peruvian Congress began its debate about advancing general elections.

Five airports—in Andahuaylas, Ayacucho, Arequipa, Cusco, and Puno—suspend operations due to demonstrations, stranding hundreds of tourists in Machu Picchu and other sites. Various countries advise against travel to Peru.

December 16: Congress rejects Boluarte’s proposed advancement of general elections to December 2023, with 49 votes in favor, 33 against, and 25 abstentions.

Boluarte’s ministers of education and culture resign six days into her administration, citing state involvement in the death of the protestors.

The OAS Inter-American Commission on Human Rights releases a statement condemning the violence since Castillo’s ousting.

The overall death toll from the clashes reaches 24.

December 18: The OAS commission announces a visit to Peru from December 20 to 22, where it will evaluate the events since Castillo’s departure.

Boluarte does her first interviews with the press, appearing on three major television stations. The president, who said a day earlier that she intended to reshuffle her cabinet, announces she will swap out her prime minister. She also says Mexico offered Castillo’s family political asylum, which Mexico’s president confirms a day later.

December 19: Ipsos’ December survey found that 63 percent of Peruvians disagreed with Castillo’s action to dissolve Congress, although the rate in rural areas runs at just 40 percent.

Arequipa and Cusco airports reopen. The tourists who were stuck in Machu Picchu are evacuated by helicopter.

December 20: Mexico’s Foreign Minister Ebrard announces his country has granted asylum to Castillo’s family. In response, the Peruvian ministry of foreign affairs releases a statement that the former first lady is under investigation–alongside Castillo–for leading a criminal organization but that she is not in danger of political persecution.

Congress approves a reform to advance general elections to April 23, 2024, with 93 legislators voting in favor, 30 against, and 1 abstaining. As this is a constitutional reform, it requires a second vote, scheduled for February 2023.

Due to Mexico City not recognizing Peru’s new government, the foreign minister of Peru declares the Mexican Ambassador to Peru Pablo Monroy “persona non grata” and gives him 72 hours to leave the country.

December 21: Castillo’s family arrives in Mexico alongside Monroy and is greeted by Foreign Minister Ebrard.