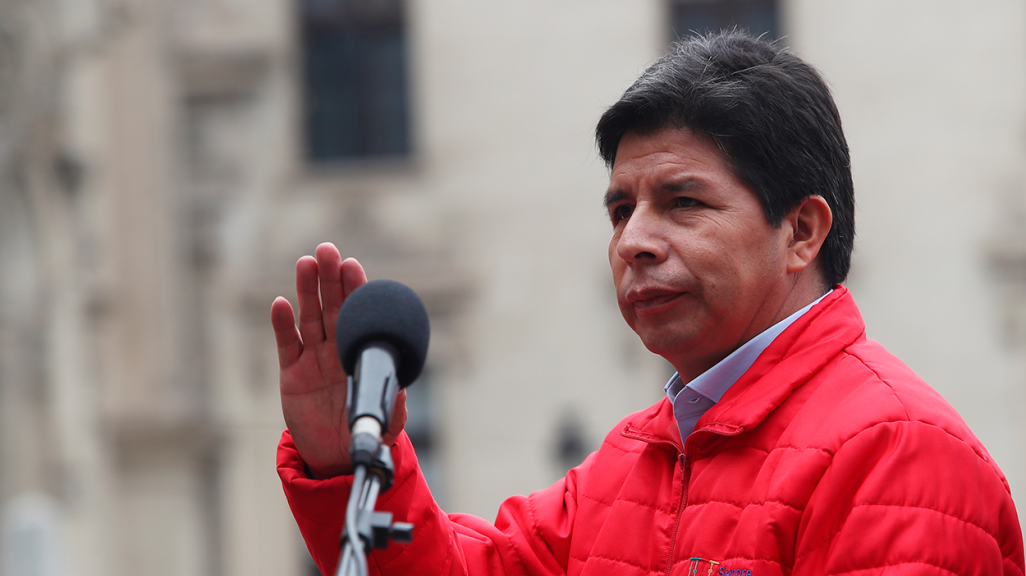 What happened in Peru on December 7? How did domestic and international leaders respond? Who is Dina Boluarte?

What happened in Peru on December 7?

Updated December 9, 2022—Hours ahead of a December 7 impeachment vote, President Pedro Castillo attempted to dissolve Congress, install an emergency government, and rule by decree. But with ministers, diplomats, and even the head of Peru’s army swiftly handing in their resignations in protest, Castillo lacked the political support necessary to pull off the maneuver. Instead, the legislature went ahead with the process, voting 101 to 6 in favor of impeaching Castillo for “moral incapacity.” Ten lawmakers abstained from voting.

Shortly after, the ousted leader was detained by security forces, per a national police tweet. Lawmakers swore in Vice President Dina Boluarte as the interim leader. In the evening, the national prosecutor's office revealed it was investigating Castillo for violating constitutional order and rebellion.

Castillo’s 17 months in office were marked by turbulence involving dozens of changes to his cabinet and major corruption scandals. The former teacher and union leader was a political outsider who survived two prior impeachment proceedings. His presidency came on the heels of a difficult period for the country, with successive battles between Congress and heads of state leading the country to have four presidents between 2016 until he took office last year.

AS/COA Online takes a look at reactions in the few short hours between Castillo’s attempt to dissolve Congress until his detention.

How did domestic and international leaders respond?

In Peru, a string of resignations followed Castillo's attempt to dissolve Congress. In terms of his own cabinet, it began with Labor Minister Alejandro Salas who was followed by several others, including the Prime Minister Betssy Chavez and Finance Minister Kurt Burneo.

Castillo also lost the backing of the military when commander Walter Córdova Alemán stepped down. Both the police and armed forces warned Castillo not to violate the Constitution.

Diplomats joined in the resignations in protest of Castillo's actions. Peru’s Ambassador to the OAS Harold Forsyth stepped down from his position, as did the country’s top envoy to the UN Manuel Rodríguez Cuadros and the Ambassador to the U.S. Oswaldo de Rivero.

In Latin America, Mexican President Andrés Manuel López Obrador responded to the day's events by tweeting that Castillo had, since taking office, been faced with "elite economic and political interests" that forced him "to make decisions that benefitted his adversaries" and led to his ouster. López Obrador had been scheduled to travel to Peru the following week for a Pacific Alliance leaders conference.

On the morning after the impeachment, López Obrador said Castillo had been in contact with him for help. Mexico's Ambassador to Peru Pablo Monroy met with the detained Castillo on December 8 to discuss the possibility of the ousted leader gaining asylum in Mexico.

The foreign ministry of Colombia called for dialogue on the day of Castillo was impeached and condemned attacks on democracy, regardless of where they come from. But the next day, President Gustavo Petro tweeted a thread in which he said that, as a popular leader and former teacher, Castillo had been "cornered from his first day." He described Castillo's move to dissolve Congress in order to head off an impeachment as an error, but that anti-democratic moves can't be responded to with other anti-democratic moves. He later tweeted that the Inter-American Commission on Human Rights should take steps to protect Castillo.

On December 7, Luis Arce, president of Peru's neighbor Bolivia, tweeted: "From the beginning, the Peruvian right tried to overthrow a government that was democratically elected by the people, by the working class seeking more inclusion and social justice." The Honduran government called the impeachment of Castillo a coup.

President-elect of Brazil Luiz Inácio Lula da Silva, meanwhile, expressed regret over Castillo's ouster but said lawmakers had followed constitutional order and wished Boluarte success in bringing her country back together. The Bolsonaro government described Castillo's actions as "incompatible" with Peru's Constitution. Argentina's President Alberto Fernández called on political actors to defend human rights and the Constitution but did not mention the coup. Chile's government also voiced regret, as well as confidence that a solution would be found through democratic means while "reaffirming its commitment to democracy and dialogue as the only path to overcoming this complex moment." The Spanish government issued a statement condemning the rupture of the constitutional order and congratulating the country for "reestablishing democratic norms."

Who is Dina Boluarte?

Boluarte, Peru’s first-ever female head of state, was on Castillo’s ticket as his running mate when he won office in 2021. But she denounced his self-coup, calling it a “coup d'état that aggravates the political and institutional crisis that Peruvian society will have to overcome with strict adherence to the law.”

Up until November 26, Boluarte also served as Castillo’s social development minister, but she resigned from that post in protest of of the appointment of Betssy Chávez as prime minister, saying the move contributed to polarization.

Though she had not held elected office before assuming this position, she had run for mayor of Lima and for Congress. She also served as the head of the National Registry of Identification and Civil Status in the Surco district of Lima. Boluarte is from Apurímac, a majority Quechua state in the center-south.

Boluarte was a member of the leftist Free Peru party for most of her political career, though she said in a January interview with La Republica that she never embraced the party’s ideology. She was subsequently expelled from the party.