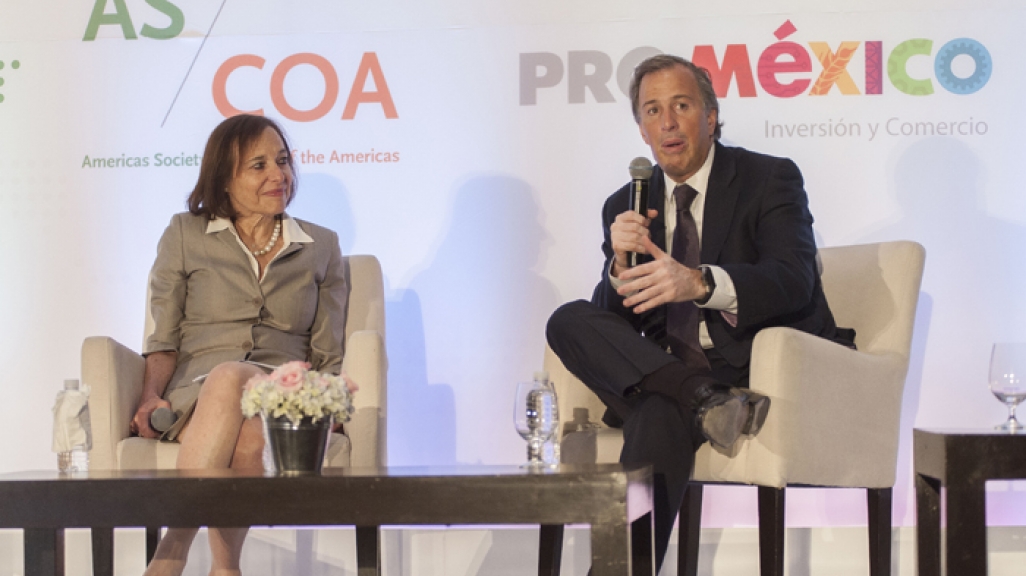 Mexico is on track to be the eighth-largest economy in the world by 2050, but it needs to grow more inclusively.

Panel: Status and Effects of the Reforms

U.S.-Mexico ties are stronger than ever, and AS/COA CEO and President Susan Segal kicked off the Mexico City conference on May 13 with the numbers to prove it. Every minute, the two countries exchange $1 million in bilateral trade, she said.

Segal then introduced ProMéxico CEO Francisco N. González, who gave an overview of Mexico’s economy, one of the strongest in Latin America. Mexico is on track be the eighth-largest economy by 2050, said González, citing a report by The Economist. He pointed out that the number of jobs created last month was more than in any other April on record. Additionally, inflation is the lowest Mexico has seen in decades, dipping to 2.4 percent from January to April this year.

There was also significant progress in the energy sector, which saw a rise in private investment. Forty percent of the new projects are concentrated in wind energy, which doubles Mexico’s energy capacity, González said.

Economy Secretary Ildefonso Guajardo spoke next, beginning with comments on the current global uncertainty and sluggishness. “The biggest problem the world faces today is a mood change,” said Guajardo, pointing to the U.S. presidential election underway and the recent suspension of Brazilian President Dilma Rousseff as examples. Yet, in the midst of this, Mexico’s domestic economic engines are for the first time the ones propelling the economy, rather than the external factors that pulled the country out of the crises of 1994–1995 and 2008.

For first time, Mexico is being driven by an internal motor VS external motors -Secretary @ildefonsogv #MXascoa pic.twitter.com/eGJqCr7yjs

During a Q&A session, Guajardo was asked about the implications of Donald Trump’s candidacy for U.S. president. He noted that it was best Mexicans didn’t intervene, as it would only add fuel to the fire. “We’ve never seen such an ugly and aggressive debate, but that will change,” said Guajardo, underlining the change in rhetoric expected in the shift from the primaries to the general election. Plus, there are high-level figures we haven’t yet heard from, he added, like the governors of border states California and Texas, which have strong economic ties with Mexico.

Election in US is about creating jobs/growth/prosperity. Mexico has a direct role in that for many US states -@s_segal #mxASCOA

Segal added that it’s important to make the facts known to the American public, namely the benefits of collaboration between the countries. In terms of the North American Free Trade Agreement (NAFTA), the future of the trade agreement lies in the signing of the Trans-Pacific Partnership (TPP), which would update the existing framework of U.S.-Mexico trade, Guajardo said.

"There are more natural resources in Latin America than in the Middle East." - Chevron's Ali Moshiri #mxASCOA https://t.co/71puMzu8Z5

Overall, the sector is transitioning from a monopolistic system to a privatized one, which requires continued confidence from the private sector. Moshiri said that the country’s human capital when it came to energy expertise is much higher than in other Latin American countries. The Chevron executive also said it’s necessary for Pemex, the state oil company, to clearly communicate its strategy to the government, the public, and interested partners.

Olvera spoke of the core points of the reforms aimed at improving the telecommunications industry in Mexico, such as encouraging competitiveness, strengthening internal demand, and building new infrastructure that new companies can use.

Messmacher of @SHCP_mx: In 3 years, revenues from small producers grew by 50% ($400M) in the formal economy, expanding tax base. #mxASCOA

Messmacher turned the conversation toward the 2013 financial reforms, which increased taxes outside of the oil sector and in turn helped balance the fiscal budget in the midst of falling oil prices.

Palacios spoke about the Commission's role in fomenting a competitive environment in Mexico. She said that various business sectors are increasingly competitive, though the changes are not as obvious as the ones taking place in the railroad and aeronautics industry. But Palacios warned that there is still the risk that large corporations will dominate the Mexican market and push out small- and medium-sized companies.

In the next part of the program, Secretary of Social Development José Antonio Meade spoke with Segal about Mexico’s efforts to reduce poverty. The country is moving in the right direction, Meade said, but we have to keep working on policies that promote inclusive growth.

Meade presented a slideshow with statistics on poverty reduction by state, noting how the southern states of Chiapas, Guerrero, and Oaxaca have seen less progress. The private sector’s role in combatting poverty in these more rural areas is essential, Meade said: “Not everything can be done with state resources.” (Download a pdf of his presentation.)

A third and final panel focused on the productivity and growth challenges in Mexico and Latin America overall. CAF's Juan Carlos Elorza moderated the discussion.

For Boeing’s Donna Hrinak, globalization is reaching all industries and so it’s important to always strive to be more competitive. For example, as part of a green initiative, Boeing is working to reduce plane emissions by 30 percent. In addition, Boeing signed a deal with Aeroméxico and Conacyt to advance research into aviation biofuels.

Marcos Gunn of Chubb Group spoke of the challenges in the insurance industry across Latin America. Mexico, for example, is not taking advantage of integration opportunities with its southern neighbors, he said. Kellogg’s Nicolás Amaya talked about how the Mexican market has learned to adapt to security issues just as Colombia did some decades ago. Amaya also pointed out that international trade and collaboration increases the region’s productivity. Hrinak added that high-quality education is especially necessary for businessmen and women to understand how to best take advantage of these trade deals, and it’s the government’s responsibility to provide that.

The day ended with closing remarks by María Eugenia Casar, the executive director of the Mexican Agency for International Development Cooperation. She reiterated that development and growth requires the efforts of everyone—the private and public sectors, civil society, academics, legislators, local government, and citizens alike.