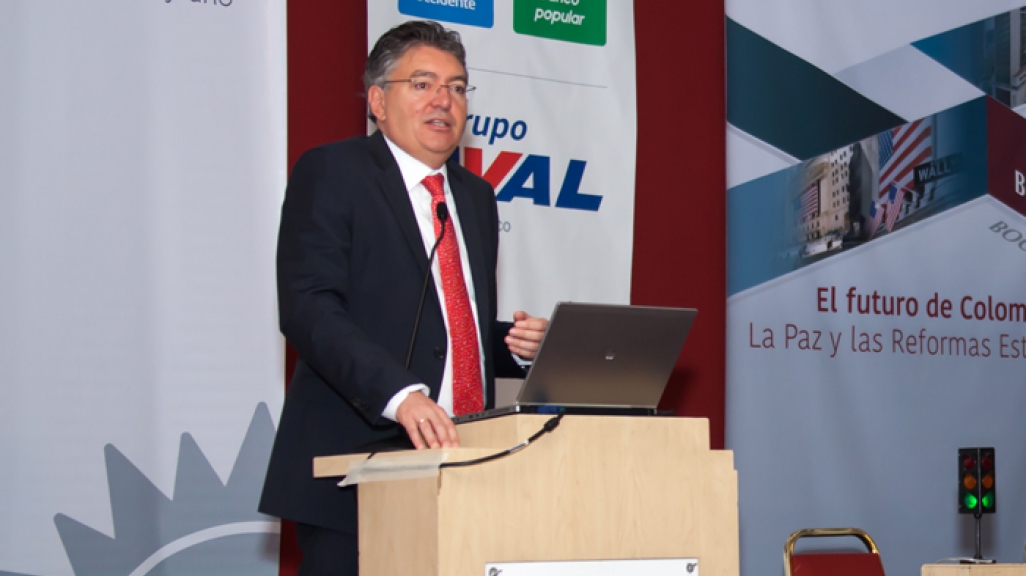 Summary: Bogotá 2016 – Colombia in the Eyes of Wall Street

Speakers discussed everything from Colombia’s public debt to structural reforms to the financial dividends of peace.

While the drop in oil prices has hit Colombia hard, the country’s projected GDP growth is better than the average for Latin America and the Caribbean, said AS/COA Vice President Ragnhild Melzi in her opening remarks at AS/COA’s annual conference in Bogotá on June 9. Melzi also highlighted a historically low unemployment rate and poverty rate below the regional average. Still, she said, the country faces the formidable challenges of finalizing and then implementing a final peace agreement with the Revolutionary Armed Forces of Colombia, aka the FARC, continued tax reforms, and large-scale infrastructure projects like a fourth-generation road systems known as 4G.

Finance Minister Mauricio Cardenas then gave an overview of how the Colombian economy has reacted to the oil price drop, which led to an unprecedented $20 billion in losses from exports in one year, representing 5 percent of GDP. When prices first started to fall in 2014, the minister said, Colombia passed tax reform that helped mitigate the deficit. While Colombia’s public debt increased to 41 percent of GDP in 2015, the rise was due primarily to the fact that the Colombian peso lost value vis-à-vis the U.S. dollar, he said, and the debt levels themselves are “stable.” His ministry adjusted the 2016 budget, cutting spending worth 1.2 percent of GDP, and projects that sectors like agriculture and manufacturing will bring GDP growth this year to 3 percent.

Next up was Leonardo Villar, the executive director of Fedesarrollo, a Colombian think tank. Villar highlighted that Colombia was finally seeing an increase in nontraditional exports, especially to the European Union and United States. But El Niño has hurt exports, causing food prices to rise 13 percent and inflation with it.

The IMF’s Western Hemisphere Director Alejandro Werner gave an overview of global economic growth, which he said remains moderate but uneven. He stressed the need for Latin American countries to examine not just China’s growth rate, but the transition its economy is undergoing, noting that the country’s imports are weaker and commodities prices are likely to remain low. Also affecting the region is a deceleration in the U.S. manufacturing sector, he said, as now few expect the U.S. Federal Reserve to raise its interest rates in the near future. In Latin America, while recessions in countries like Argentina, Ecuador, and Venezuela, drag down economic growth in the region, so too does corruption, said Werner, which causes higher corporate sector vulnerabilities and discourages investment.

For its part, Colombia is navigating global external shocks positively, he said. He qualified the country’s financial adjustments as coordinated, orderly, and necessary, but that there are still more to make as the country’s economy still faces challenges.

Sergio Clavijo, president of ANIF, a Colombian economic policy advisory group, took a more cautious tone in his remarks. While it was true that the Colombian economy was in better shape than most, he urged against complacency, especially in regard to rising public debts. He also stressed the need for labor and pension reform in light of the peace process and the anticipated integration of demobilized rebels into the workforce.

Following was the titular panel, “Colombia in the Eyes of Wall Street,” with Luis Alarcón of BBVA Colombia, Fernando Bravo of Goldman Sachs, Citi’s Munir Jalil, and EY’s Jaime Vargas moderating. Jalil was the most optimistic about Colombia’s inflation rate, which Citi expects to come down by the end of the year due to converging food prices. Alarcón said the cost of the Colombian basket is cheap among Pacific Alliance countries, and there’s a lot of room to grow international participation in the economy. Bravo spoke about the structure of 4G financing, noting that the costs of construction remain one of the biggest challenges to the project’s implementation.

Bravo: The role of international investors, local capital markets is key to the success of Colombia's 4G infrastructure project. #COLWallSt

In the afternoon, the topic switched to Colombia’s ongoing peace negotiations with various rebel groups, and the economic effects of a post-conflict Colombia. Clavijo presented again, this time focusing on the role of illicit substance cultivation and production in the Colombian economy. He also stressed the need for strengthened institutions, saying that without operative justice, there could be no lasting peace.

The most spirited discussion of the day was the closing panel on the financial dividends of peace, with comments from Colombia’s National Planning Department Director Simón Gaviria, U.S. Ambassador Kevin Whitaker, and Jorge Botero of Fasecolda, a securities federation, with Clavijo moderating. Gaviria, whose agency works on the financing of post-conflict projects, explained how they researched peace efforts in three dozen countries with armed insurgencies. Through their analysis, they expect Colombia to add 1.1 to 1.9 percent to its annual GDP in peace, that’s to say, once it is no longer fighting internal armed conflict. Part of the boost comes from the subsidies the government has paid to victims of the conflict—representing 10 percent of GDP—over the years, money that can be directed elsewhere in peace.

But getting money to Colombia’s rural areas, which are most often conflict zones, will be a particular challenge, a point both Gaviria and Whitaker, who spoke next, stressed. Whitaker talked about how the U.S. embassy was working with the Colombian government to establish and expand access to financial resources in rural municipalities, in addition to supporting ongoing projects like reintegration and demining.

But Botero warned against being overly optimistic about peace. He noted that he did not use projections from Gaviria’s agency in his models, fearing that they were overly reliant on this optimism as a driver of economic confidence. He argued that the financial dividends from peace would not be as high as people tended to expect, since they’ll likely come in rural conflict zones, where economic production is already low and so dividends would be also. “I hope I’m wrong,” he said, “but optimism is hard to maintain from a technical point of view.”

The other panelists responded, with Gaviria highlighting that their projections were based on research, not abstract projections. Clavijo underscored the untapped potential of the economy in conflict zones.

Elizabeth Gonzalez and Pablo Medina Uribe contributed to this summary.