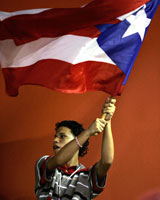 Come 2012, Puerto Ricans may find themselves considering the island’s political status. On October 5, Puerto Rican Governor Luis Fortuño submitted a proposal to the legislature seeking a two-part referendum that could allow Puerto Ricans to choose their island’s political future. This is not the first such referendum in Puerto Rico—previous votes were held in 1967, 1993 and 1998—though none reached a conclusive outcome. The proposal comes less than a week after U.S. President Barack Obama indicated that a super-majority favoring change  would be necessary for the U.S. Congress to take up the issue. Attitudes within the island are mixed, with the ruling party supporting statehood and the opposition contending that, with rising crime and high unemployment, Puerto Rico has more pressing issues.

In a televised address to his constituents on October 4, Governor Fortuño announced that Puerto Rico’s “moment has come” to decide its political future, and the next day submitted a 24-page proposal to the Puerto Rican Congress. The legislation proposes a referendum in two parts. In the first part, to be held on August 12, 2012, Puerto Ricans will be asked if they want a change in the island’s status. If voters indicate that they do, a second vote will be held during November 2012 gubernatorial elections that will allow voters to choose between independence, U.S. statehood, or sovereign-free association—the last of which is a status similar to the island’s present commonwealth status. But the result of any plebiscite would have to be approved by the U.S. government to be valid. The elections would be open only to the island’s 3.7 million residents and not the larger stateside diaspora,  numbered at 4.6 million in 2010.

The governor’s New Progressive Party (PNP), which holds a large majority in the island’s House and Senate, supports becoming the fifty-first state of the United States. Meanwhile, Chairman of the opposition Popular Democratic Party (PPD) Alejandro García Padilla accused the governor of seeking to distract Puerto Ricans from the real issues facing the island, such as the highest murder rate in its history, a corrupt police force, and unemployment higher than that of any U.S. state. PPD Senator Eduardo Bhatia said, “This is not what Puerto Rico needs at the moment.” The move was welcomed by those in Puerto Rico’s independence movement, which represents a small minority of the electorate.

In accordance with their 1952 Constitution,  Puerto Rico is a commonwealth in free association with the United States. Puerto Ricans are U.S. citizens and can vote for their local governor and legislative representation, but cannot participate in elections at the federal level. They pay no federal income tax, but contribute to federal entitlement programs. They have a representative in the U.S. Congress, but he has limited voting power. The prior referendums in 1967, 1993, and 1998 sought to change this status, but none achieved the necessary majority. The 1967 vote maintained the status quo and the 1993 vote resulted in no option receiving a majority. The last referendum, in 1998, resulted in a vote of 50.3 percent for “none of the above,” the option urged by those supporting maintenance of the present system.

So what are the chances for a status change this time around? At the very least, most Puerto Ricans believe it’s time to consider the question, although there may not be the requisite majority needed for a change. A poll of 1,000 adults conducted by the Puerto Rican TV network WAPA and the poll service Ipsos find that 60 percent of Puerto Ricans agree that it is time the issue be debated. Of those, 39 percent support maintaining the status quo and 34 percent support statehood. Five percent support independence, and 12 percent support none of the options. However, Obama stated that a supermajority be necessary for the U.S. Congress to consider changing Puerto Rico’s status. “If [the vote] is split down the middle, 50/50, or 51/49, then I think Congress’s inclination will be not to change, but to maintain the status quo until there is a greater indication that there is support for change.”

Plans for the latest referensum follow recommendations from the Obama administration’s Task Force on Puerto Rico’s Status, released in March 2011. The president traveled to the island in June of this year, returning on a campaign promise to visit the island as president and resolve its political-status question. Because of Obama’s previous commitment to the “self determination” of Puerto Rico, many, such as the island’s Speaker of the House Jennifer González, were surprised by Obama’s remarks last week that a “strong preference” for change would have to be shown for the U.S. Congress to take up the issue. González stated that if a majority of Puerto Ricans voted for a status change, “Congress would be not only morally, but politically obligated” to comply with the outcome.