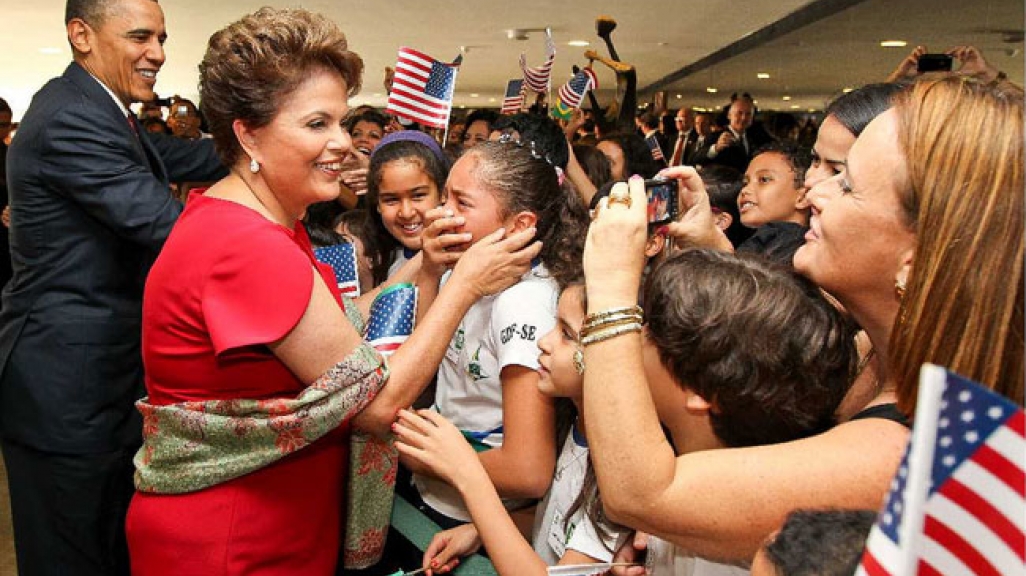 Brazil’s president could look for ways to boost her country’s sluggish economy while broaching issues ranging from climate change to defense.

On June 29 and 30, Brazilian President Dilma Rousseff heads to Washington for an official visit with her U.S. counterpart, Barack Obama. In 2013 she was due to make a state visit—a more formal affair with diplomatic honors—but she cancelled in the wake of a U.S. National Security Agency (NSA) spy scandal. While officials offered Rousseff to reschedule a state visit next year, she opted for an earlier, lower-key trip as she faces economic troubles and record low approval ratings at home.

Here are facts to keep in mind ahead of Rousseff’s arrival in DC.

1. The United States is one of Brazil’s largest investors, among its largest trade partners, and an important source of tourism.

Not only is the United States one of the largest sources of foreign direct investment, but it’s also Brazil’s largest export market for value-added products.

U.S. exports to Brazil saw an upward trend in the wake of the global economic crisis, and now the United States enjoys a trade surplus with Brazil. Last year, bilateral trade amounted to around $73 billion. Plus, in 2014 the United States was the only one of Brazil’s top five export destinations in which the South American country gained market share.

Tourism is also important as more Brazilians have entered the middle class and travel abroad. In 2013, close to 2 million Brazilians visited the United States and spent more than $9 billion. Americans represent the second largest number of tourists who visit Brazil every year—close to 600,000.

This month, Brazil’s tourism minister said the government plans to lift the tourist visa requirement for Americans ahead of the Olympics. Plus, Rousseff’s chief of staff said Brazil will negotiate to end tourist visas for Brazilians traveling to the United States in exchange for opening up domestic flight routes to foreign airlines.

Trade relations matter even more because of Brazil’s economic woes. “Brazil is reengaging with the United States more out of a position of weakness,” Mark Langevin, director of the consulting group BrazilWorks, told AS/COA Online. “But clearly the reason that they are meeting now is Brazil finding itself in a weak position in respect to its national economy and looking for ways to reboot it.”

Because of these economic challenges and Rousseff’s record-low approval rating, her visit could play well at home, says AS/COA Vice President Brian Winter. “What President Rousseff is looking to do in Brazil is lay the foundation for what could one day become a middle class country,” he told AS/COA Online. “She believes that the United States is a great example to follow.”

3. Two scandals could come up during the visit.

Rousseff nixed her U.S. visit two years ago in the wake of revelations of large-scale NSA spying in Brazil. She spoke out against the U.S. espionage programs at the UN and pushed legislation to secure her country’s digital security. Ahead of the visit, a Brazilian official told Foreign Policy that the U.S. government made private concessions when the two leaders met in April at the Summit of the Americas.

The president also faces a major corruption scandal at home involving a vast bribery scheme within Petrobras, the country’s state-run energy company. Petrobras operates in the United States through a subsidiary and is the target of two U.S. investigations. Brazilian prosecutors formally asked U.S. authorities for help in their investigation.

4. Climate change represents an area of potential for cooperation.

Both presidents discussed this issue during their April meeting in Panama, and it will likely come up again in Washington. Aside from bilateral initiatives, the United States needs Brazil’s support ahead of the December UN Conference of the Parties (known as a COP), when countries will attempt to secure a legally binding climate accord. Plus, both countries face record droughts in major agricultural regions.

“Climate change is one of the few major areas where Rousseff still has the power to make a difference,” wrote former Congressman Alfredo Sirkis for climate coalition Observatório do Clima last month. Last year, Brazil gained acclaim as the country with the greatest carbon emission reductions worldwide. But at the 2014 COP, Brazil opted not to sign a major Latin American reforestation initiative.

5. In the past, both countries sought to cooperate on defense and aviation, potential areas for new deals.

Last month, Obama and Rousseff discussed energy, educational exchanges, and science and technology, which could potentially come up again during the visit. Defense and aviation could also arise during Rousseff’s visit.

In April 2010, the two countries inked a defense agreement to expand cooperation in research and development, promote information exchanges and joint military exercises, and encourage acquisitions of defense products and services. But Brazil’s lower house of congress only approved the accord on June 23—five years later—and the deal now heads to the Senate.

One issue that could come up involves a potential U.S. deal that fell through. In 2014, Brazil finalized a $5.4 billion deal to buy fighter jets from Sweden’s Saab, which beat U.S. and French companies. But prosecutors are now investigating the contract for possible irregularities.

Brazil has long sought a permanent seat on the UN Security Council. While countries like the United Kingdom support Brazil’s bid, the U.S. government has not, instead throwing its weight behind a seat for India.

U.S. hesitation may stem from Brazil’s UN voting record and its diplomatic record in the Middle East and Latin America. “The doubts that Washington has tend to revolve around this issue of ‘Is Brazil fully punching its weight?’ in the diplomatic sense,” said Winter. “Washington says, essentially, ‘We are sure we want you at the small table on some of these issues because you are not living up to your responsibilities.’”

In 2010, the United States and Brazil differed on policy toward Iran. The U.S. government opposed an Iranian nuclear deal forged by Brazil and Turkey, opting to vote for more sanctions in the UN. On top of that, Brazil has abstained from UN votes on the Syrian war and a 2014 vote on providing assistance to Ukraine.

Also, the Brazilian government has been reluctant to take action on Venezuela in the wake of violence during anti-government protests or the imprisonment of opposition politicians there. Attempts by the Union of South American Nations—including Brazil—failed to mediate successfully between the government and opposition last year. Could a recent event mark a shift on this front? This month, a group of Brazilian opposition senators traveled to Caracas to try to meet with imprisoned opposition figure Leopoldo López but said their bus was attacked, forcing them to return home. The Brazilian Foreign Ministry requested an explanation through diplomatic channels. Ruling-party senators are following suit with a June 25 visit to Caracas to meet with both government leaders and the opposition.