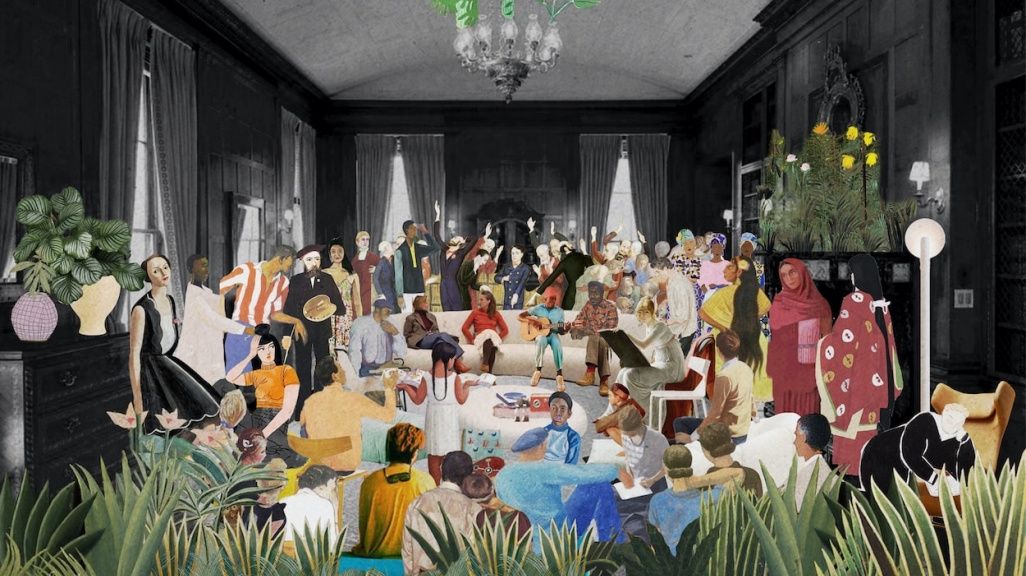 In Situ: Conversations on Architecture and Beyond

Visual Arts' series of Instagram posts invites architects and thinkers to contribute their spatial ideas and thoughts around the inside, the outside, and the in-between space(s).

This series of Instagram posts invites architects and thinkers to contribute their spatial ideas and thoughts around the inside, the outside, and the in-between space(s). In a moment when a large amount of the world population is locked down, forced to negotiate between isolation, interiority, and connectivity in unprecedented ways–we urge to rethink: How are we navigating this crisis spatially? How are we shaping this new everyday experience across the Americas and the world at large? Where is the architecture discipline today, how is it transforming, and how is it going to help shape a better world for the future?

Curated by Laura González Fierro and Agustin Schang. In collaboration with the Center for Architecture.

Milton Braga is a founding partner of MMBB Arquitetos, a firm based in Sao Paulo, Brazil. Since 1991, MMBB has developed significant public and institutional projects through urban design, winning the First Prize for the 2020 Dubai Expo Brazilian pavilion and the award-winning project at the 2014 Ibero-American Biennial de Architecture & Urbanism. He holds an architectural degree from the Faculdade de Arquitetura e Ubanismo da Universidade de São Paulo where he was also granted a Masters (1999) and a Doctoral degree (2006). Since 2001, Braga has been a professor at the FAU USP and a visiting professor and lecturer at the University of Florida, Royal Institute of British Architects, American Institute of Architects, and the Nether- lands Architecture Institute.

Enrique Norten is the founder and director of TEN Arquitectos with projects in Mexico City, New York andMiami. Born in Mexico, he received a Bachelor of Architecture from Universidad Iberoamericana and a master’s degree from Cornell University. In 1986 he founded TEN Arquitectos, producing and researching architecture, urbanism and design through cultural, residential, and urban infrastructure projects. He holds the Miller Chair at the University of Pennsylvania. He is a visiting professor at Yale School of Architecture, Harvard GSD, University of Michigan, UCLA, Cornell, SciArch, Rice, Columbia GSAPP, among others. In 2018 he received the Fine Arts Medal from the Ministry of Culture and was the first Mies van der Rohe Award recipient for Latin American Architecture in 1998.

Mariana Ordóñez Grajales is an architect and researcher based in Mexico City. In 2017 she cofounded Comunal: Taller de Arquitectura with Jesica Amescua, a firm that provides design services to underserved rural communities, focusing on participatory design, social housing, natural building materials, and techniques. She earned a bachelor’s degree from the Universidad Autónoma de Yucatán and holds a master’s degree from Universidad del Medio Ambiente, where she teaches sustainable design. Along with photographer Onnis Luque, she runs Tipologias—a research project supported by FONCA and the Graham Foundation—documenting Mexico’s endangered traditional housing. The firm Comunal was recognized, among others,by the AR Emerging Architecture Awards in 2019 and Architectural League of New York Emerging Voicesprogram in 2018.

Jerome W. Haferd is an American architect practicing in New York City. He is an adjunct professor at Columbia GSAPP, Barnard, and City College Bernard Anne Spitzer School of Architecture. He is interested on how architecture establishes a dialogue with contemporary phenomena, non-hegemonic users, and spaces. Haferd is the co-founder of BRANDT : HAFERD—a Harlem based collaboration studio—whose projects include writings, drawings, academic, and built work. The studio won the first annual Folly competition held by The Architectural League of New York and the Socrates Sculpture Park in 2012. Most recently the practice won the Zero Threshold competition in 2019 with a multi-abled, intergenerational housing prototype and the AIA New Practices New York Award in 2020.

Sandra Barclay is an architect living and working in Lima, Peru. In 1994 she cofounded Barclay & Crousse Architecture with Jean Pierre Crousse, exploring the bonds between landscape, climate, and architecture in order to challenge notions of technology, usage, and quality of life that from the specific conditions of developing countries can inform and be pertinent in a global context. She graduated from the URP University in Lima and the Ecole d’Architecture de Paris-Belleville in France. The firm received the Mies Crown Hall Architecture Prize in 2018 and the Oscar Niemeyer Prize in 2016 for the best building in Latin America. In 2018 she won Architect of the Year Prize, Women in Architecture from the Architectural Review in London.

Camilo Restrepo is a Colombian architect living and working in Medellín. He is the founder of AGENdA—Agencia de Arquitectura, along with Juliana Gallego, who are committed in creating cultural and social value through site-specific urban and rural projects. He graduated from Universidad Pontificia Bolivariana and holds a master’s degree from Universidad Politécnica de Catalunya. He is a guest professor on sustainability at the Universidad Di Tella in Buenos Aires and was a guest professor at Harvard GSD (2013-2016). Restrepo’s work has been exhibited at the Chicago Architectural Biennial (2019) and the Bienal de Arquitectura de Chile (2017), and published by Abitare and Arquine magazines. In 2020, AGENdA was selected by Domus magazine as one of the world’s 50 best architecture firms.

Gabriela de Matos is a Brazilian architect and urban planner, graduated from the Catholic University of Minas Gerais in 2010. She is the founder of the organization ‘Arquitetas Negras' (Black Female Architects), a project that maps the production of black female architects in Brazil, promoting the debate of gender and race in architecture. Her research focuses on structural racism and its influences on urban planning, contemporary African architecture, its diaspora, and its impact on Brazil. She is the coeditor of the book ARQTAS NEGRAS (2020), and the magazine Arquitetas Negras vol.1 (2019), the first publication organized by black female architects in Brazil. Since 2020 she has been the vice president of the Institute of Architects of Brazil São Paulo chapter—IAB.

Alejandra Celedón is a Chilean architect, researcher, and curator based in Santiago. Her doctoral thesis from the Architectural Association, "Rhetorics of the Plant," studies the link between drawings and words, objects, and discourses. She curatored "Stadium: a building that renders the image of a city," the Chilean Pavilion at the 16th Venice Architecture Biennale in 2018, and co-curated (alongside Nicolas Stutzin and Javier Correa) "The Plot: Miracle and Mirage" at the Chicago Architecture Biennale 2019. She conducts research on educational infrastructure from the scale of the furniture, the classroom, the building, to the institutional and political program. She is the director of the architecture master's program at the Pontificia Universidad Católica de Chile.

Gloria Cabral is a Paraguayan architect living and working in Asunción. Since 2009, she has been a partner with Solano Benitez at Gabinete de Arquitectura, researching architecture’s capacity in the construction of society. In 2010 they participated in the Bienal Panamericana with the CRIT Teleton building. In 2014 she participated in the Rolex Mentor & Protégé program, where she worked alongside Swiss architect Peter Zumthor. The studio received the Golden Lion at the 15th International Architecture Exhibition—La Biennale di Venezia for “Breaking the Siege,” and the Panorama prize in 2016 for their project Quincho de la Tia Coral. In 2018, Cabral received the Moira Gemmill Prize for Emerging Architecture and juried the RIBA prize Home of the Year. She currently teaches at UNA in Paraguay and HKU in Hong Kong.

José Esparza Chong Cuy is an architect, curator, and writer. In October 2018, he was appointed executive director and chief curator at Storefront for Art and Architecture. Previously, he was the Pamela Alper associate curator at the Museum of Contemporary Art Chicago, where he joined in 2016. It was there that he developed large-scale retrospective on the life and work of Lina Bo Bardi, co-organized with the Museu de Arte de São Paulo and the Museo Jumex in Mexico City. Before the MCA, Esparza Chong Cuy was associate curator at the Museo Jumex. From 2007-2012 he held positions as curatorial associate at Storefront for Art and Architecture, research fellow at the New Museum for Contemporary Art, and contributing editor at Domus magazine. In 2013 he was co-curator of the Lisbon Architecture Triennial, titled Close, Closer.

Wonne Ickx is a Belgian architect living and working in Mexico City. He is a founding partner of PRODUCTORA. The studio has received many awards for its work, including the Young Architects Forum (2007) and Emerging Voices (2013) by the Architectural League of New York. In 2016, the firm received the Mies Crown Hall Americas Prize for emerging architects at the IIT and the Oscar Niemeyer Prize for Latin American Architecture. He is the founding director of LIGA, Space for Architecture, an independent platform that stimulates an interchange of ideas and investigation on contemporary Latin American architecture in Mexico City since 2011. He has taught architecture and urbanism at Harvard GSD, IIT, UCLA, RICE, and several universities in Mexico.

Florencia Rodriguez is an architect and has dedicated her career to writing and editing. In 2014, she received the Loeb Fellowship from the Harvard Graduate School of Design. In 2010, she founded PLOT magazine, and in early 2017 she embarked on a new project with Pablo Gerson, the editorial platform Lots of architecture publishers, whose main product is the periodical publication –NESS. On Architecture, Life and Urban Culture. Until 2019 she served as Professor of Landscape Theory and Technology Theory at Torcuato Di Tella University, and has taught at other institutions including Universidad del Litoral and The Boston Architectural College. She has received awards for her editorial work and has recently been invited to guest edit the next issue of the Harvard Design Magazine, together with Mark Lee.