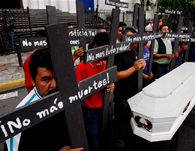 Central American leaders assembled in San Salvador Tuesday to step up cooperation at a time when concern grows—particularly in Guatemala, El Salvador, and Honduras—over the growing strength of organized crime. Salvadoran President Mauricio Funes called the extraordinary meeting  of the Central American Integration System (SICA) to address five topics: security, social policy, climate change and natural disaster prevention, economic integration, and regional institutionalism. But two of the more pressing topics on the agenda are how to stem spiraling gang violence and bringing Honduras back into SICA’s fold.

The meeting counted among its attendees OAS Secretary-General José Miguel Insulza, World Bank President Robert Zoellick, and the Inter-American Development Bank’s head Luis Alberto Moreno. But Nicaraguan President Daniel Ortega was conspicuously absent. Nicaragua remains the only Central American country that does not recognize the government of Porfirio “Pepe” Lobo, voted into office five months after the ouster of Manuel Zelaya. Although SICA did not officially expel Honduras, the body condemned the June 28 coup and imposed a boycott on the country. But the El Salvador summit presented the opportunity for Central American leaders to allow for Honduras' return. Summit attendees also voted in favor of the country rejoining the OAS.

Drug traffickers took advantage of the Central American country’s political instability over the past year, sparing rising violence. As the UN Office on Drugs and Crime reported in World Drug Report 2010, “Honduras has the unfortunate distinction of having the fastest-growing murder rate in the region,” a dubious distinction that the report connects to the use of the country as a landing area for airplanes carrying cocaine from Colombia and Venezuela. But Honduras does not stand alone on the issue; the report identified it along with El Salvador and Guatemala as a region where drug-related violence threatens governance. According to the National Drug Threat Assessment 2009, 69 percent of the cocaine that enters the United States is moved along the Mexico-Central America Corridor.

With this pressing concern in mind, El Salvador’s Foreign Minister Hugo Martínez said the SICA summit would create a security plan that involves sharing information and coordinating actions with Colombia and Mexico in order to effectively fight against drug and human trafficking, as well as organized crime. Martínez also declared that Central America needs a security strategy separate from the Merida Initiative,  which focuses mostly on the fight against Mexican drug cartels.

This call for a particular strategy would respond to the security concerns raised by presidents of the “northern triangle” countries of El Salvador, Guatemala, and Honduras. Last week, President Álvaro Colom of Guatemala said  the violent acts taking place in the country will continue as a result of the government’s fight against gangs.  A report from the International Crisis Group calls Guatemala one of the world’s most dangerous countries, with some 6,500 murders in 2009, which stands higher than during the country’s three-decade-long civil war and stands at roughly twice Mexico’s homicide rate. The leadership changes of the UN-backed International Commission Against Impunity in Guatemala, an anti-corruption body, has caused concern about the country's ability to turn the tide. In reaction to similar violence facing El Salvador, Funes proposed a law criminalizing gang membership and authorizing military presence in 62 blind spots along the border where drug smuggling occurs.

Boosting public security and addressing security concerns will be essential for the region’s economic development. As a whole, Central America will grow 2.5 percent in 2010, a figure that contrasts with the 4.5 percent expected of Latin America as whole.