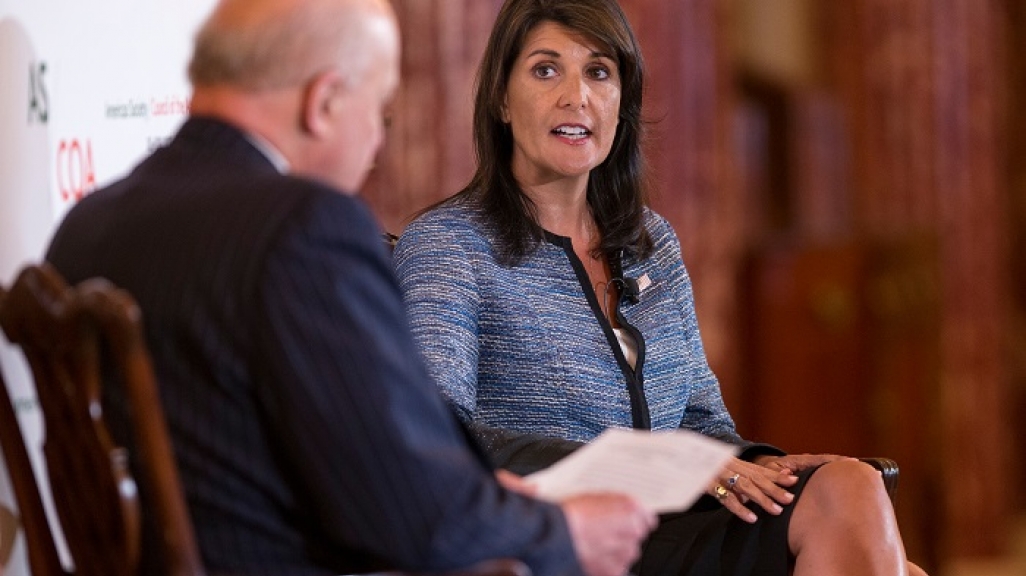 Recap: The 48th Annual Washington Conference on the Americas

Many speakers had strong words for Venezuela, none more so than U.S. Ambassador Nikki Haley.

“Washington and the world must remain actively engaged with the region and continuously build constructive relationships as these changes unfold,” said AS/COA President and CEO Susan Segal, who opened the 48th Annual Washington Conference on the Americas along with AS/COA Vice President Eric Farnsworth. Prosperity and security are two of the core tenets of President Donald Trump’s policy toward the region, said Francisco Palmieri, acting assistant secretary for Western Hemisphere Affairs at the State Department.

In the first keynote of the day, U.S. Ambassador to the United Nations Nikki Haley did not mince words on Venezuela.

“It is time for Maduro to go,” she told the crowd in the State Department’s Benjamin Franklin State Dining Room. The first of many speakers throughout the day to call the upcoming May 20 presidential election “a sham,” she said, “The Venezuelan people no longer have a government. They are the unwilling victims of a criminal narco-state.” In particular, she said the migrant crisis, in which 1.5 million Venezuelans have fled their country since 2014, “threatens the peace and security of the entire region.” After her presentation, she sat down for an interview with AS/COA Chairman Emeritus and Ambassador John Negroponte, in which they talked about her efforts to get the Venezuelan crisis on the UN Security Council’s agenda.

Democracy has been “eviscerated” in Venezuela, said Deputy Secretary of State John J. Sullivan in the following speech, adding that the United States supports a peaceful, democratic transition in Venezuela, led by the Venezuelan people. He also affirmed the United States’ commitment to the anticorruption fight in the region. "As corruption grows, freedom and prosperity wither,” he said. “The U.S. will not stand for corrupt practices abroad that we would not stand for at home."

“We support the Venezuelan people in their sovereign right to elect representatives through free, fair, and transparent elections.” – Deputy Secretary of State John Sullivan on #Venezuela at #2018WCA @ASCOA pic.twitter.com/H4gsJG9nA1

The Financial Times’ world trade editor Shawn Donnan asked the panel on regional growth about news that Argentine President Mauricio Macri is requesting a $30-billion credit line from the International Monetary Fund. Are we looking at the beginnings of another emerging markets crisis?” he asked the panel. David Malpass, U.S. Treasury undersecretary for international affairs, said no, and that overall conditions for economic growth looked favorable. Nonetheless, “we’ll be watching the discussions closely,” he said.

Good governance reforms are the key to encouraging economic growth in the region, said panelist Marcello Estevão, the Brazilian finance secretary for international affairs. “The population has no tolerance anymore for bad public governance,” he said. In particular, he cited the need to pass a social security reform, finalize bilateral trade agreements, and open Mercosur to more international trade. Speaking on the need for infrastructure in the region to spur growth, IFC CEO Philippe Le Houérou said he was "flabbergasted" to learn that it costs more to ship cargo by truck from Bogotá to the coast than from Colombia to China by freight.

IFC CEO Philippe Le Houérou: My biggest concern globally is the rising debt levels of some of the poorest governments. #2018WCA pic.twitter.com/Hn0n1KwLBG

Energy Secretary Rick Perry laid out the case for how, in energy development, there shouldn’t have to be a tradeoff between environmental protection and economic development. “When nations embrace innovation over regulation, they can do both economic growth and environmental protection,” he told the room at the State Department, after being introduced by Chevron Vice President for Government Affairs Maria Pica Karp. The former Texas governor also said that energy policies that try to avoid fossil fuel use completely aren’t feasible. Even if technology can make renewables competitive with fossil fuels, he said, it will take decades for renewables to replace them in daily use.

The Americas are safer today because as a whole we’re producing more energy. America’s new role as an energy exporter increases energy security for our hemisphere so we no longer have to rely on bad state actors. Thank you @ASCOA for the opportunity to speak today. #2018WCA pic.twitter.com/TVDA3qseIX

Senator Bob Menendez (D-NJ), the ranking minority member on the Senate Foreign Relations Committee, said that while he supports the Trump administration’s use of targeted sanctions toward Caracas, more needs to be done to address the humanitarian crisis. To that end, he announced that in the coming week, he will be introducing a comprehensive bill in the Senate on Venezuela. He stressed the bill has bipartisan support, saying that the issue of Venezuela represented a “unique opportunity” for cooperation across the aisle.

In his second appearance in a row at the conference, Commerce Secretary Wilbur Ross challenged Latin American governments to raise their infrastructure spending to 5 percent of GDP per year, and invited all in the room to join the Department in its efforts to make the Western Hemisphere the world’s most transparent trade environment. Ross, who was introduced by Merck Latin America President John Markels, also described about the “insidious” nature of Chinese investment in the region, saying it often requires countries to repay loans with commodities, thereby hobbling future cash flows. The secretary addressed NAFTA talks, saying: “We’re somewhat encouraged by progress being made, but are really concentrating on a handful of difficult issues yet to be resolved.” He added: “In a few weeks, the calendar will start working against us,” given upcoming Canadian provincial elections and Mexico’s presidential vote. “If we don’t see progress soon, probably we won’t see it for quite a while until the end of the year, if at all.”

Secretary Ross of @CommerceGov at #2018WCA @ASCOA says corruption is a problem in expanding trade w/ Americas but Odebrecht changing that #TradeTalks pic.twitter.com/pFqEwrutwk

“The U.S. relationship with Mexico is one of the finest that’s out there,” said Ted McKinney, undersecretary of trade and foreign agricultural affairs for the Department of Agriculture, in a conversation with Bloomberg Television anchor Shery Ahn. “NAFTA has shown terrific benefits for the two. It is right and just that we modernized NAFTA.” That said, he was less bullish on the relationship with Canada. “Their managed supply does not speak to free and fair trade,” he said, particularly on the issue of milk. “If we can get dairy fixed with NAFTA, I believe we’ll settle this and we can be friends again.”

Closing out the afternoon sessions with an “electrifying” presentation, Nebraska Senator Ben Sasse opened by saying that few places understand the importance of global trade than the Cornhusker State, where 13 cents of every dollar depends on international agricultural commerce. The senator went on to say that anxieties about the future of work are about technology and automation rather than trade, thanks to misunderstandings among those on Capitol Hill, the media, and the American public about how trade works. He urged those in the room to, when making the case for trade, understand and acknowledge people’s legitimate anxieties in a time of “unprecedented economic upheaval.”

After an introduction by AS/COA Chairman Andrés Gluski, Florida Senator Marco Rubio, also returning to the conference for the second year in a row, issued closing remarks that echoed many speakers’ sentiments on topics like Venezuela. While he did not address his move earlier in the week to pull congressional funding for Guatemala’s anticorruption body, he did say that he “continued to support our partnership with Guatemala” and other Central American countries.

Rubio also said he was “disappointed” by the president’s decision to end Temporary Protected Status for the roughly 86,000 Hondurans living in the United States. "I think that was the wrong decision, I think that should be and hopefully will be reversed,” said the Florida senator. “I think it places incredible strains on a nation that has been a good partner to the United States and has done everything that’s been asked of them in terms of taking on these issues.”

It's tough to make it to the front page with a Western Hemisphere story when you have other headlines on Iran, etc, but that doesn't mean we're not working on it. —@marcorubio speaks live at #2018WCA https://t.co/VUEit1xs21