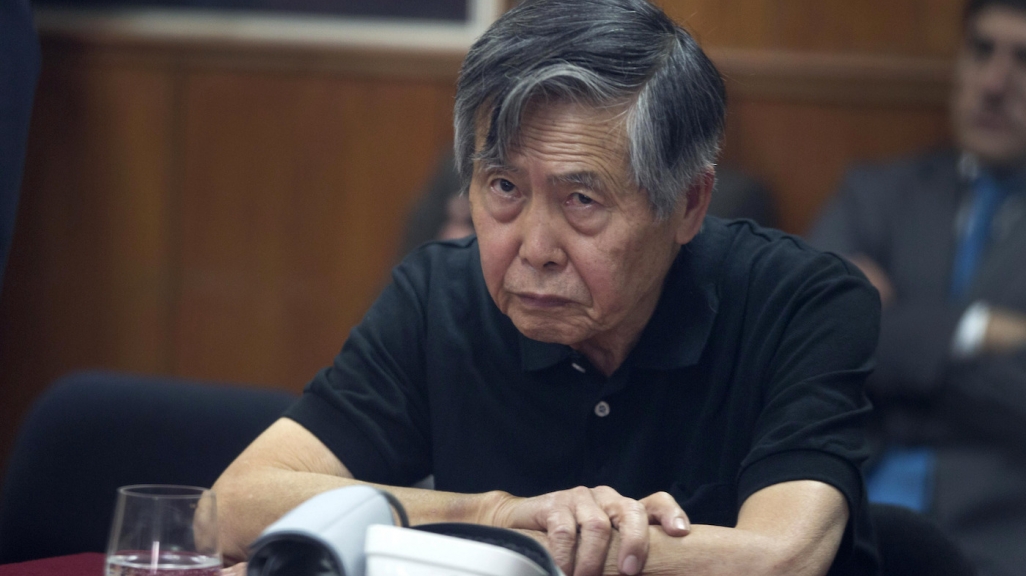 On March 28, Peru’s president evaded a second impeachment attempt. On March 29, its national men’s soccer team won a crucial do-or-die match on the road to the 2022 World Cup. And all week, Alberto Fujimori seemed to be on the verge of being released from prison, where he is incarcerated on charges of human rights violations and abuses of power. After the Inter-American Commission on Human Rights (IACHR) stepped in, however, it looks like he might not be released after all.

Peru-based freelance journalist Mitra Taj, whose bylines appear regularly in The New York Times and Financial Times, gave an on-the-ground view from Lima on the implications of each event for the country’s climate.

AS/COA Online: Between the impeachment attempt, the specter of Fujimori’s release, and the qualifier match, which was the biggest event in Peru?

Mitra Taj: Without a doubt, it was the Peru-Paraguay match. Peru’s soccer team only seems to keep getting better in recent years. It’s a huge source of excitement, while everything related to politics seems to be stuck in a loop of dysfunction—a sort of slow downward spiral that’s made a lot of people not want to look too closely.

The decision a couple weeks ago by the Constitutional Tribunal to reinstate Fujimori’s 2017 pardon was a big deal when the news broke, and hundreds if not thousands have protested the ruling. But I don’t think I saw any reports of protests this week, in part because many expected he would be ordered back to jail again like he was in 2018. It turns out, he didn't even get out temporarily this time because the IACHR ordered Peru to suspend the sentence and refrain from freeing him. It's widely expected that the IACHR will issue a final ruling to annul the sentence in coming days, with the most likely scenario that he remains in prison.

Peru has been here before. When Pedro Pablo Kuczynski (PPK) pardoned Fujimori on Christmas Eve of 2017, after striking a deal with a faction of fujimoristas that helped him survive impeachment, there were huge nationwide protests. Since then, Peruvians have seen Fujimori leave jail and be sent back again, and there have been five more impeachment attempts, some of which, like the motion that failed Monday, were widely expected to go nowhere.

AS/COA Online: So let’s talk about Castillo. How was this impeachment attempt different from his first one in December? Also, how does it compare to attempts against his two predecessors, Martín Vizcarra and PPK?

Taj: The impeachment motion in December never got off the ground and it didn’t find enough support to admit it for a vote. This one got a bit further. It was admitted with signatures from some 50 lawmakers. But before the vote, no one expected it to pass, and only 55 lawmakers wound up supporting it, far from the 87 votes needed. In fact, Castillo seemed so sure he’d survive that he didn’t bother to stick around for his lawyer’s defense and left Congress after delivering a short speech.

Still, it’s not a good sign for Castillo that he’s already faced two impeachment attempts in the first eight months of office. Both PPK and Vizcarra saw the first attempts to oust them about two years into their governments. PPK resigned to avoid near-certain impeachment in March 2018 and Vizcarra was impeached in November 2020. Castillo has more than four years to go, and his approval rating has fallen to some 24 percent—about half of Vizcarra’s when he was impeached.

So, this latest impeachment attempt is a reminder of how a rarely used maneuver has become a part of the basic toolset of politicians. Since impeaching a president risks provoking a constitutional crisis, it’s part of the wear-and-tear on Peru’s democracy. What all the impeachment attempts have in common in recent years is that they’ve sought to remove a president over alleged wrongdoing by declaring him “morally” incapable of governing, a constitutional clause that lawyers say was historically intended to refer to a mental incapacity.

Using that clause to impeach a president over alleged graft—as with PPK, Vizcarra, and Castillo—is relatively new in Peru and started with the first impeachment attempt against PPK in late 2017. But since the Constitutional Tribunal declined to weigh in on the constitutionality of Vizcarra impeachment in 2020, it is in effect legal, and there’s no limit in the Constitution to how many times a president can face impeachment.

AS/COA Online: You wrote that Castillo “seems to have dropped all pretense of being leftist” on Twitter. How so? Does this reveal a shift in ideology, or is it more about political opportunism and survival?

Taj: I think it’s more about opportunism and survival. I’m not sure Castillo ever had a firm leftist ideology. He had experience as a union activist and campaigned on a populist platform that championed leftist causes, such as a new Constitution, “taking back” natural resources for the people, and investing heavily in education and health care. The ruling party, which Castillo partnered with to run for president, is Marxist-Leninist and led by a radical far-left former governor. But Castillo hasn’t proposed any major leftist reforms since taking office, and has largely dropped his promises for profound change, stressing instead that he’s no radical or chavista and poking fun at those who suggested he would be.

He may be aware now that many of those proposals weren’t realistic and lacked political support. In a recent interview with CNN en Español, he declined to identify as a leftist, describing himself ideologically instead as “a man from the provinces.” Perhaps most symbolically, he’s stopped wearing his trademark sombrero after letting Bolsonaro wear it during a friendly meeting with him on the Peru-Brazil border after purging progressives from his cabinet. What, if anything, still makes him leftist, is that he still has the support of key leftist parties.

AS/COA Online: Impeachment aside, very little of the tension is relieved between the executive and the legislature. What is a scenario that might offer some stability?

Taj: It’s hard to say. Technically, if Castillo is impeached, his vice president should take over. And if she resigns—as she has said she would to protest his impeachment—the head of Congress is next in line. Only nine 9 percent of Peruvians would want his vice president to govern if Castillo is impeached, according to a recent poll by the Institute of Peruvian Studies. Some 80 percent of Peruvians would want new general elections, a proposal that opposition lawmakers have said they would block. It’s hard to see current lawmakers wanting to risk a repeat of Vizcarra’s impeachment, which triggered massive protests by Peruvians who saw it as a legislative coup and that forced his successor to resign within a week.

So far, Peru’s institutions have withstood the crises of recent years pretty well, but there’s a sense that they’re constantly being tested and gradually weakened, along with the patience of most Peruvians. Many have tuned out altogether.

But the scenario for stability doesn’t look great. Castillo seems to have settled into an effective truce with Congress mainly by divvying up government posts among people linked to key lawmakers to ensure just enough votes to survive impeachment, which for many Peruvians smacks of tit-for-tat politics and is just as worrisome as a new round of political uncertainty. Castillo has appeared to prefer loyalists to technocrats in government posts, allegedly tried to promote unqualified military officer friends up the rank, and regularly tries to discredit journalists. And he’s already facing corruption allegations. This week, his former palace secretary and two nephews went on the run after arrest warrants were issued for them in connection with a money laundering investigation involving companies that won government contracts.

AS/COA Online: On Alberto Fujimori, what are the implications of his potential release on Peruvian politics today?

Taj: It reaffirms just how relevant the Fujimori family remains in Peru, more than two decades after Alberto Fujimori fled Peru and resigned by fax from Japan. And I think they’re still relevant in part because they’re so persistent. Keiko Fujimori has run for president three times and came very close to winning the past two elections. There’ve been several bids by the Fujimori family to secure a pardon for Alberto or overturn his convictions, and there’s an endless effort by his supporters to vindicate his legacy by smearing his critics as terrorists.

After his 2017 pardon, Alberto has mostly avoided commenting and stayed out of the public eye, so I don’t think he will be weighing in much on local politics. But if he’s ordered back to jail, a pardon could come into play again. Castillo could opt to grant him a humanitarian pardon by trying to do it “properly,” or at least use the possibility to negotiate with the opposition. But both scenarios right now look unlikely. Castillo’s government has said it opposes the pardon and plans to take it to the IAHRC.

AS/COA Online: And finally, where does the blanquirroja’s fate fit into this? A diversion from the political turmoil, or smack dab in the middle of it?

Taj: The national team is much more than just a diversion. It’s become a rare source of unity and hope for Peruvians. After Ricardo Gareca became coach in 2015, the team qualified for the World Cup for the first time in three decades in 2018, and it now appears to be on the verge of qualifying again this year if Peru beats either Australia or the UAE in June.

It’s not just that the team is playing better and racking up more wins. Players appear to be trying harder, as a team, with more discipline and unity. One of the new stars on the team is striker Gianluca Lapadula, a son of the Peruvian diaspora from Italy whose love for his mother’s homeland and frequent hugging of teammates has won over hearts. Another popular player these days is Christian Cueva, who’s redeemed himself, with Gareca’s fatherly encouragement, after missing a key penalty kick in the 2018 World Cup.

In short, the blanquirroja offers many Peruvians what they can’t find in politics right now: representation. They represent a group of people who want Peru to succeed and are working hard together to make it happen. After Peru beat Paraguay, the streets filled with fans celebrating and chanting, climbing on top of cars, and playing music.

I don’t have official numbers, but it looked much bigger than the recent protests against Castillo or Fujimori.