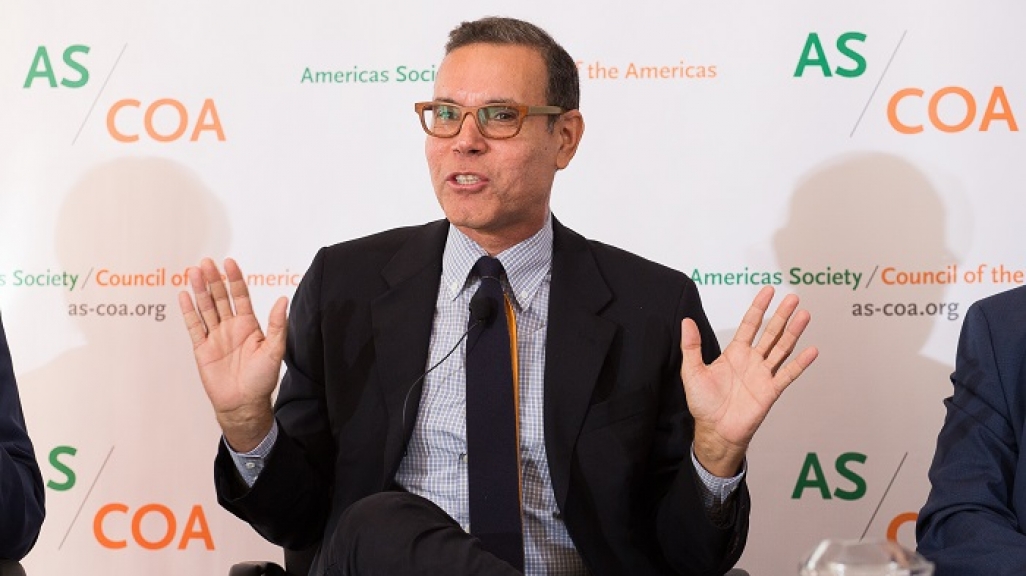 Q&A with Luis Vicente León: "Chavismo Isn't the Force It Once Was"

Every poll is a snapshot, says the Datanalisis executive director. And they paint a picture of a Venezuela in flux.

“The most I’ll venture to say is that the opposition is without a doubt the favorite to win a majority in Venezuela’s National Assembly.”

On December 6, Venezuela will hold legislative elections to fill all 167 seats in its National Assembly. With heavy restrictions on local media, the polls released by the firm Datanalisis have become go-to barometers for public opinion in the run-up to Election Day. On the sidelines of our November 13 event on the elections, Datanalisis Executive Director Luis Vicente León spoke with AS/COA Online’s Holly K. Sonneland about what the polls do and don’t show. Although most polls, including his own firm’s, have opposition parties standing to make big gains in the elections, the statistician is careful to note that no one poll is a predictor of a future result, but rather a snapshot of a given moment in the population. Nonetheless, León does believe the polls show one thing: the chavistas’ power has probably peaked, and while chavismo will likely still be around in 20 years, it’ll look much different.

AS/COA Online: Some say there is a restrictive atmosphere for news media and for those who show dissatisfaction with chavismo. But that has not been the case with Datanalisis reports and, throughout this year, your polls showed that dissatisfaction well. How have you been able to carry out these polls without limitations?

Luis Vicente León: We really don’t feel any limitation to do our job beyond the logistics we might encounter, like going into neighborhoods, etcetera. But regarding the government, we haven’t felt any pressure, nor have we received any attack beyond what you would expect in a political process. Personally, I haven’t felt any limitation to express myself. I write every week in a newspaper that has been accused of being chavista or of having been bought by chavismo—and I am not commenting on the newspaper, just my particular case—and I have only received openness, the chance to write what I want. I am a fierce critic of the government’s economic model and also, for example, a defender of the need to free political prisoners. I have openly criticized President [Nicolás] Maduro’s stances on the opposition, and I have put out data that prove the decline of his popular support. But, really, I don’t feel threatened.

AS/COA Online: You have been cautious in saying that the current polls don’t necessarily reflect how many seats in Congress the opposition will get. But Bank of America’s Francisco Rodríguez said that if the opposition can get an 18-point margin of the vote over the ruling party, they can get two-thirds of seats in the National Assembly. Is it an accurate calculation?

León: Well, they are hypotheses and forecasting methodologies. I certainly believe that the opposition has a solid enough majority, and that the scenario of a very, very strong result for them is possible. And, really, I don’t challenge methodologies, I mean, they are simply methodologies, nobody knows what is going to happen. This is why you decide what method you want to use to forecast the future. But a forecast of the future is just that: an abstract hypothesis, no one can be completely certain. As a pollster, I instead always focus on scenarios. That is, on various scenarios and maybe giving each a probability of occurrence, based on data, history, etcetera. We also run methodologies and models and, perhaps, you can challenge the base of the model.

I think the most I would dare say is that the opposition undoubtedly is the favorite to win a majority in the Venezuelan Congress. From then on, I think any of the three scenarios [of how many seats the opposition will pick up in the Assembly]—from a simple to a super majority—are possible, and that everything will heavily depend on how the battle is fought in the 87 districts where the candidates are elected, because there is a disparity between votes and deputies [based on Venezuela’s nominal-proportional representation system], since you, for example, would need up to 350,000 votes to elect a congressperson in Caracas, but only 4,000 or 5,000 to elect one in Amazonas.

AS/COA Online: There’s a quote from the author E.B. White about polls that says, “Although you can take a nation’s pulse, you can’t be sure that the nation hasn’t just run up a flight of stairs.”

León: Totally, that is why I usually don’t do linear projections. Polls are a photograph of a particular moment, which is different from Election Day. And from that particular moment to that day, many events can happen that alter the result somehow. It doesn’t mean the poll is wrong; it just means that there were changes that weren’t factored into it.

Now, obviously, as you get closer to the moment of the election, the photo tends to resemble the result more. It’s like an old photo of you when you were 15 years old and you say, “Hey, look how I looked then, how skinny, how young.” And, if you see it 30 years later well, obviously, you don’t look too much like it; maybe you even have to ask people if they recognize you. But if you take the picture the day before, it is a photo, not your current reality. Something might have happened between yesterday and today that made you different, from an accident to a bad day, but the truth is that they tend to resemble reality more when they are closer.

León: I think we will see a country that is changing, that is showing chavismo that it is not the force it used to be, a country that will add difficulties and pressures to [the ruling party’s] path so that it will have to negotiate with its rivals and realize that you can’t handle politics with an authoritarian control, because at some point it will bounce back and you will gain an adversary who will stop you. Now, I also believe that in 20 years there will be chavismo in Venezuela, that this doesn’t mean that it is over. Even if it is defeated in these legislative elections, we will be talking about chavismo, maybe in a different, mutated form, but I think chavismo is here to stay in the political history of Venezuela.

The big question is not whether the opposition wins or loses, but what a victory or defeat will mean for what the country needs, which is a national agreement—a dialogue that allows us to regain balance heading into the future. If that doesn’t happen, success won’t be success, and neither would a failure be.