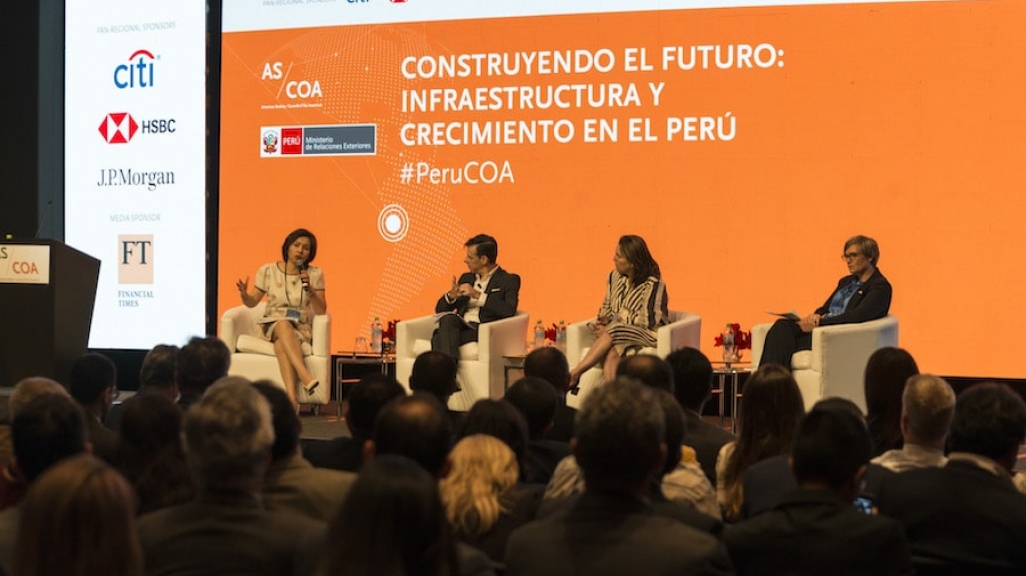 Speakers in Lima highlighted the country’s solid economic performance and the importance of focusing on an expert execution of the National Infrastructure Plan.

AS/COA Vice President Randy Melzi opened the Lima conference, “Building the Future: Infrastructure and Growth in Peru,” by highlighting Peru’s success at maintaining annual economic growth of around 4 percent, despite political uncertainty and the fall of commodity prices. That said, she said the country can no longer follow this growth path without infrastructure investment, given the global and national economic context, and she highlighted President Martín Vizcarra’s National Infrastructure Plan for Competitiveness (PNIC).

Peruvian Foreign Relations Minister Gustavo Meza-Cuadra, who spoke next, called the PNIC an essential tool for generating competitiveness, with an investment total of $30 billion. “This infrastructure plan is necessary to reach basic OECD levels and involves a commitment to raise ourselves to those standards,” said the minister. He reiterated his commitment to work to bridge the public and private sectors, invest in job creation, and Peru’s economic growth in coming years.

The Latin American Cities Conference in Lima couldn’t have come at a better time, said Alejandro Olivo Villa of Moody’s. December is the month when the ratings agency updates its economic perspectives for the next 18 months. The most important credit factors for the 2020–2021 panorama include: risks of recession, trade tensions, disruptive technologies, persistently low interest rates, political risks, and the set of criteria known as ESG (for environmental, social, and governance). Olivo Villa, comparing the country to the rest of Latin America, underscored that Peru “does not worry” the agency, which projects the country’s GDP to grow 3.0 percent in the upcoming year and 3.5 percent in 2021. The economist described Peru as having moderate economic and institutional strength, a strong fiscal position, and low vulnerability to external events. That said, Oliva Villa reiterated that the region’s economic forecast “will continue to lag,” and that Peru faces challenges such as low income levels, low corporate governance indicators, and gaps in infrastructure.

Next Julio Velarde, who’s held the role of chief of the Central Bank since 2006, presented on Peru’s economic strength across presidential administrations. He highlighted the country’s annual inflation rate in particular, which was 2.6 percent—and 2.1 percent underlying inflation—from 2001 to 2018, one of the lowest rates in Latin America. He said that Peru could hit 3.8 percent GDP growth in 2020, a year in which the region as a whole is projected to grow 1.8 percent. To achieve that, however, the country needs best practices to increase transparency, efficiency, and sustainability for the good of its cities and infrastructure. He added that innovation and digitalization, can drive that process.

In terms of infrastructure, Peru “started to build without a North Star and had success but needed to go farther” and have a coordinated national strategy, said Gabriel Daly of the Peruvian Economy and Finance Ministry, who presented on the context for the PNIC. The plan, he said, gives the country a roadmap for where it wants to go, focusing on four pillars, including multisector reach, territorial breadth, execution, and a final phase of investment. He showed various maps of the national territory, detailing different projects on energy, railroads, airports, sanitation, ports, waterways, telecommunications, and more. The PNIC is in and of itself highly valuable; the challenge will be in how it’s executed. Peru can achieve advanced development, but, he said: “We need to finish what we’ve started.”

The conference closed with a panel on how infrastructure can encourage economic growth in Peru and the respective roles of the private and public sectors in that process. Association for the Promotion of National Infrastructure’s Leonie Roca praised the PNIC. “At last we have clarity around the priorities,” she said, adding that the principal challenge remains the execution. UK Ambassador to Peru Kate Harrisson proposed that the government institute a national skills training project so that funded projects have a better chance of being successful. She also noted that there is consensus between the state and the private and academic sectors. Responding to a question from moderator Viviana Caro of the Inter-American Development Bank about what factors most affect a project’s financing structure, McKinsey’s Roberto Fantoni highlighted three: long-term private investment, the ability to scale construction (which determines a project’s competitiveness), and a partnership with the government. In the end, however, regulation is what will make or break the proper functioning of a project and ensure that the benefits will reach the society at large, he said.