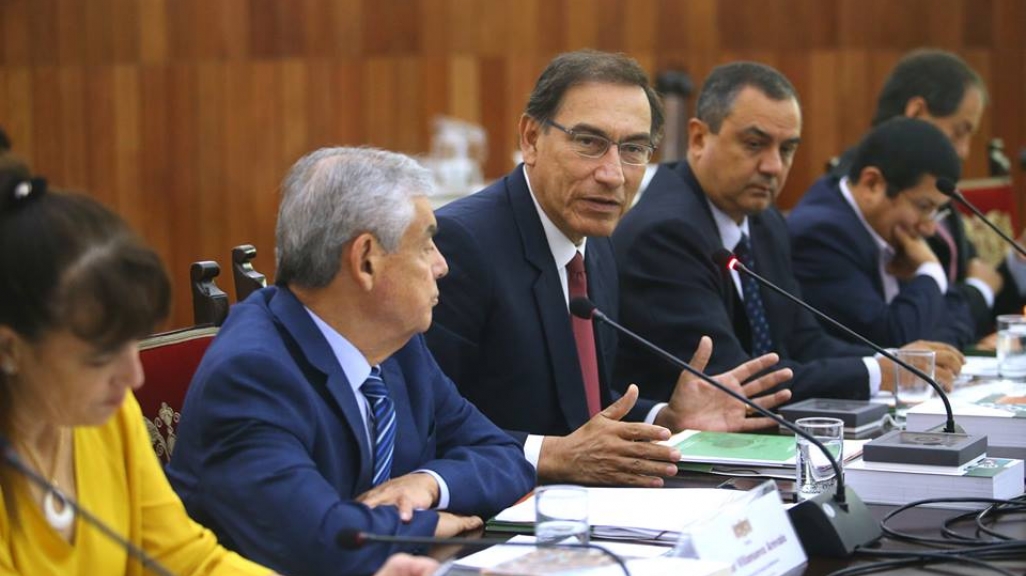 Martín Vizcarra set broad goals when he found himself unexpectedly taking over the reins from Pedro Pablo Kuczynski. Is he on track to achieve them?

Peru was not one of the nine Latin American countries scheduled to elect or inaugurate new heads of state this year, but after accusations of corruption forced President Pedro Pablo Kuczynski—also known as PPK—to resign, his first vice president, Martín Vizcarra, took over with a commitment to curbing graft and stimulating economic development. Less than four months into the job, we take a look at how Peruvians view their unexpected president and the issues that have marked his tenure.

Peruvians’ approval of Vizcarra is down from its initial high of 57 percent, yet 100 days into his presidency, he retains more popular support than any other Peruvian politician, with a 37 percent approval rating. That's compared to 18 percent for Keiko Fujimori, the leader of the Fuerza Popular opposition party. His term comes amid widespread wariness toward political institutions in general, with only 45 percent of Peruvians saying they support democracy, the lowest level since 2008. Though Vizcarra is eligible to run in Peru’s next presidential election in 2021, he has promised to step down after completing PPK’s term, leaving him three years to meet his political objectives.

Some 62 percent of Peruvians are concerned about political corruption, compared to 35 percent of people worldwide. Recent history justifies their apprehensions. It’s not just the recent scandal with PPK: the other five living former presidents have either been imprisoned, implicated, or investigated for crimes related to corruption or human rights violations.

Vizcarra took office on March 23, vowing to tackle corruption “at any cost” and work to regain Peruvians’ battered trust in their government. While hosting the Summit of the Americas in April, he signed an anti-corruption statement, and later that month his administration established a new cabinet-level Secretariat of Public Integrity. He also accepted the resignation of his newly appointed production minister for improper deal-making. In June, Peru’s Congress delegated legislative power to Vizcarra’s administration for 60 days, allowing him to adopt anti-corruption measures such as prosecuting companies that have dodged tax payments. Later that month, Vizcarra went public with evidence of corruption by officials in Peru’s Ayacucho district and joined a regional mayor in filing a complaint against them before prosecutors.

Despite these efforts, polls suggest Peruvians are not yet satisfied. A June survey revealed that only 9 percent of citizens had a positive view of Vizcarra’s attempts to fight corruption, compared to 12 percent who saw PPK’s work in a similar light the year before.

Vizcarra is pursuing a strategy of economic growth through infrastructure investments. When he took office, the country had spent just 10 percent of the $7.8 billion required to rebuild houses destroyed by flooding last year. Congress’ vote to grant Vizcarra legislative power paved the way to create an Authority for Reconstruction with Changes, which will remove some of the regulatory roadblocks to beginning infrastructure projects. In April, Vizcarra announced that regional governments will receive $400 million for local infrastructure, sanitation, and transportation initiatives. His government installed a $295,000 bridge in a northern region devastated by flooding last year. In addition, a $5.6 billion expansion will soon continue on a two-mile stretch of the Lima Metro railway, while a $67 million highway in Arequipa is scheduled to finish next year.

Since assuming the presidency, Vizcarra has welcomed investments from China, Peru’s chief trading partner, including a $2 billion port in Chancay and a $1.36 billion expansion of a copper mine that is expected to create 3,500 jobs in the next three years. A Peruvian subsidiary of a Chinese company will begin construction of a $2.5 billion iron ore mine, while a different one will undertake a $1.3 billion expansion of another mine.

Some of the president’s economic plans have faced opposition. After truck and bus drivers protested a fuel tax increase, the finance minister resigned at the beginning of June. Following some wavering, Vizcarra ultimately left the tax increases in place.

Working with the opposition

Though Vizcarra ran with PPK’s Peruanos Por el Kambio party in 2016, he is not a member of that or any other political party. Without clear allies to enact his agenda in Congress, Vizcarra has had little choice but to work with Fuerza Popular, which holds a majority of seats in the chamber and is headed by the Fujimori family.

So far, ties between Vizcarra and Fuerza Popular have been more productive than during PPK’s administration. Vizcarra received initial praise and a vote of confidence after naming a new cabinet with an opposition politician as his prime minister.

Nonetheless, the relationship has had its frostier moments. Fujimori, who was the runner-up to PPK in the 2016 election, claimed that Vizcarra “is being badly advised” on a law that prohibits state advertising in private media. Generally, however, Fujimori has been more occupied with battles with her brother Kenji and accusations that she was involved in the sprawling Odebrecht corruption case.

Gender-based violence continues to be a high-profile issue in Peru, where 60 percent of women have been victims of some form of sexual violence. In the first four months of 2018, Peru saw a 26 percent increase in femicides over the same period in the previous year.

This issue made international headlines in April when a stalker set a young woman on fire on a bus and again in June when she died. Vizcarra was widely condemned for saying in the wake of the attack, “Sometimes that’s how life is and we have to accept it.” He responded to the criticism with a five-point plan to combat violence against women. In addition, the measure Congress passed in June granting him increased legislative powers also allowed for the creation of a National Specialized Justice System for the Protection and Punishment of Violence against Women.

Venezuela at the top of the agenda

The humanitarian crisis in Venezuela represents one of Latin America’s most pressing regional challenges, with Peru taking regional leadership via the Lima Group. Vizcarra has largely maintained his predecessor’s tough stance, refusing to invite President Nicolás Maduro to attend April’s Summit of the Americas. Peru is hosting 350,000 Venezuelan migrants, more than any country other than Colombia. That number could rise to one million by the end of 2018.

PPK instituted a temporary visa program that allows Venezuelans to work and study in Peru. Vizcarra has continued this initiative, pushing measures to formalize working conditions for Venezuelans in the country while keeping the chief immigration office in Lima open 24 hours a day, seven days a week, to address the influx of new arrivals.