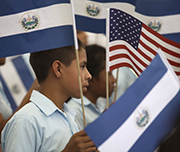 Earlier this month, by rejecting the nomination of Mari Carmen Aponte as U.S. ambassador to El Salvador, the Senate - by a margin of 49 to 37, and 11 votes short of the 60 needed to break the filibuster - continued an unfortunate history of playing politics with those nominated for Western Hemisphere positions. Before blocking Aponte's nomination, the Senate approved Norman Eisen as ambassador to the Czech Republic.

The timing could not be worse. Given its geographic proximity, the deterioration of the security environment in Central America is of direct national consequence for the United States. If left unchecked, drug trafficking organizations and gang violence will overwhelm underfunded and under-equipped governments. In fact, after Southern Africa, Central America has the highest number of homicides per 100,000 people of any subregion in the world, according to the 2011 Global Study on Homicide published by the United Nations Office on Drugs and Crime. In Honduras, which has the world's highest murder rate, 82.1 of every 100,000 people are the victims of a homicide; El Salvador comes next with a rate of 66.0 per 100,000 people.

It is a situation that requires continued, uninterrupted attention by the U.S. and its partners in the region. The U.S. should be concerned about the effects of uncontrolled violence in an area so close to our borders, but other national interests are at stake, namely trade and immigration.

Migration to the U.S. also would be further reduced by addressing national "push" factors such as insecurity and a lack of employment opportunities that leave many with few options other than to go north.

As President Obama noted during his March 2011 visit to San Salvador, "El Salvador can be a source of great prosperity and security for this region for many years to come." Although it is a country of only 6 million people, El Salvador has the potential to be a regional example of how to combat insecurity through an approach that involves both the security and judicial apparatuses as well as prevention. But to help foster important reforms in El Salvador and the region, the U.S. needs an ambassador in place. And we need someone there now.

Since September 2010, Mari Carmen Aponte - a recess appointment who required formal congressional approval to continue serving as ambassador past this month - has served in that role well. During her watch, the U.S. government fostered stronger bilateral relations with the government of President Mauricio Funes, strengthened ties between the U.S. and Salvadoran business communities and led the way for El Salvador to be included as one of four countries globally to participate in the Partnership for Growth (PFG) initiative.

Signed in November, the PFG lays out a comprehensive strategy to overcome barriers to economic growth with the dual focus of improving security and reversing the low productivity in the tradable goods sector. Its signing was the result of a 16-agency process, with the government of El Salvador actually writing half of the joint action plan. That spirit of cooperation - both within the U.S. government and with a partner country - is an achievement in and of itself. But what is even more important is the shift in U.S. priorities to a strict message of economic growth as a key driver for reducing violence, creating opportunities for youth and hopefully stemming the tide of Salvadorans who leave their country looking for a better life somewhere else.

But by forcing Ambassador Aponte to come home at the end of the year, those who voted against her nomination are now sending a different signal: politics, including unsupported accusations that a former boyfriend was a Cuban spy and disagreement with an op-ed written to mark the president's support for Gay Pride Month, triumph over policy. In the Americas, holding hostage ambassadorial appointments is particularly endemic.

Defeating her nomination was clearly not in the best interests of the U.S. or of U.S. relations with Central America. The U.S. is looking to El Salvador to be a first, key country in reversing the violence and ushering in a new period of economic prosperity. An ambassador is needed to accomplish this. It is time for Congress to quickly approve whoever will be our top-ranking diplomat in San Salvador or risk setting back the progress we have achieved.