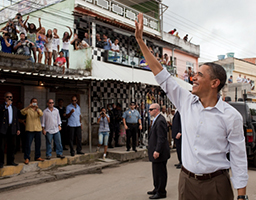 In the midst of crisis in Libya and the Middle East, the confused aftermath of the earthquake in Japan, and a budget battle in Washington, President Barack Obama arrives in Brazil Saturday for a short trip to Latin America that will also take him to Chile and El Salvador. Is this really a good use of the president's time? Absolutely; with a sluggish recovery at home and the region increasingly looking to China and others to diversify economic and political ties, now is the time to show that the United States is a willing partner that takes seriously the region's concerns as opposed to nations that just take the region's commodities.

Brazil is a key to success. Obama's travel to Brasilia offers an early opportunity to explore a substantive and expansive common agenda barely three months after the inauguration of the new Brazilian president. The personal histories and paths to their respective nations' presidencies -- Obama as the first African American president, Dilma Rousseff as a former revolutionary and Brazil's first woman president -- offer a unique opportunity to forge a personal relationship between leaders that can drive the overall bilateral and even regional agenda. Indeed, shortly after her election Rousseff expressed "admiration" for Obama's election, and announced a desire to rebuild a relationship with the United States that had cooled considerably under her predecessor, Luiz Inacio Lula da Silva.

Innovation and technology, energy, trade, social inclusion, and cooperation in other areas such as Haiti, Africa, and global climate change are all on the agenda. But unless the agreements are also formulated within a broader commitment for regular, policy-level consultations -- including within multilateral organizations such as the UN and the Organization of American States -- they will only have limited impact as Washington quickly returns to more traditional priorities and policy "stovepipes" that exclude Brazil and, more broadly, Latin America.

With that in mind, Brazilians are anxious to hear what the US president will say about a permanent UN Security Council seat, as he proposed for India last November. (Support for Brazil should be forthcoming but need not be exclusive of others such as Mexico.) Additionally, an acknowledgment that US agriculture subsidies are an obstacle to improved relations with Brazil and an offer to consider reforms within the farm bill re-authorization would be well received. Such an initiative, along with final US passage of trade agreements with Colombia and Panama, could kick-start both the Doha and also hemispheric trade discussions, tangibly supporting the President's export agenda.

After Brazil, the president will travel to Chile to meet with that nation's relatively new president, Sebastian Piñera, who has presided over earthquake relief, the miners rescue, economic recovery, and democratic transition to the first center-right government in Chile since the dictatorship, all in less than a year of governing. He will also speak to "all Americans" on US policy in the Americas, tracking closely with the remarks he made two years ago at the Summit of the Americas in Trinidad and Tobago.

In El Salvador the president will appropriately show post-ideological support for that country's center-left president, the first since conclusion of the brutal civil war in 1989, while seeking additional ways to address the drug-fueled criminal violence that has exploded across Central America.

Still, the main opportunity of the trip should not be overlooked. Latin America is a region transformed, with suitors queuing up: China, India, Canada, the EU, and others. Questions are being asked across the region as to who their partners should be, and why. The United States faces a new moment in the Americas: no longer can we take economic partnership or political influence for granted. But neither is it inevitable or advisable, due to the democratic values we mutually claim and the economic development agenda we share, that the United States become divorced from the hemisphere in which we reside. Concrete steps are required, beginning with recognition that partnership is in US interests and that it requires sustained effort and the expense at both ends of Pennsylvania Avenue of political capital on behalf of US policy in the Americas. If that can be achieved, the trip will have proven to be a resounding and lasting success.

Eric Farnsworth is vice president of the Council of the Americas and a former White House policy advisor on hemispheric affairs.

The outbreak in China has already affected economic sectors in Latin America. Is there more to come?