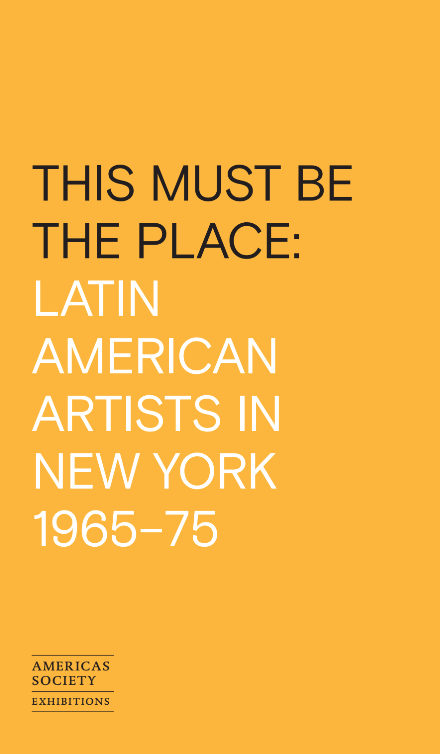 This Must Be the Place: Latin American Artists in New York, 1965–1975 Pocketbook

This is a fully illustrated pocket book released to accompany the same-titled exhibition at Americas Society, curated by Aimé Iglesias Lukin.

The two-part group exhibition This Must Be the Place: Latin American Artists in New York, 1965–1975, explores the work of a generation of migrants who created and exhibited in New York City between 1965 and 1975. Featuring installation, photography, video art, painting, and archival material, the exhibition brings together a generation that actively participated in experimental artistic movements while pushing forward their own visual languages and ideas, with works exploring topics of migration, identity, politics, exile, and nostalgia. Additionally, the exhibition highlights the important contributions and solidarity initiatives of groups and collectives, testimony of these artists effort to create community and to forge a space for themselves. Some of them include CHARAS, Taller Boricua, Latin American Fair of Opinion, An Evening with Salvador Allende Concert, Brigada Ramona Parra, Contrabienal, Cha/Cha/Cha, Young Filmmakers Foundation, Young Lords, and El Museo del Barrio.

Featuring installation, photography, video works, painting, and archival material, the exhibition brings together a generation that actively participated in experimental artistic movements pushing forward their own languages and ideas. The artists largely contributed to the decade’s transformation of art from the Americas and around the world.

The presentation of This Must Be the Place: Latin American Artists in New York, 1965–1975 is made possible, in part, by public funds from the New York City Department of Cultural Affairs, in partnership with the City Council. Additional support is provided by Fundación Ama Amoedo, the Smart Family Foundation of New York, and The Cowles Charitable Trust.

To accompany this exhibition Americas Society will release the book This Must Be the Place: An Oral History of Latin American Artists in New York 1965-75 with the support of our co-publisher, the Institute for Studies on Latin American Art (ISLAA).