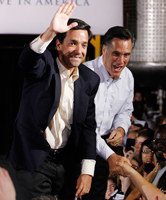 Updated February 1, 2012 - Latinos played a pivotal role in the Florida Republican primary on January 31, giving former Massachusetts Governor Mitt Romney an overwhelming number of their votes to help him win big over his top rival, former House Speaker Newt Gingrich. As The Washington Times noted, Romney's decision to take a "hard-line position on immigration" during the primary race didn't dent his Latino following in the state, where he captured 54 percent of the Hispanic vote compared to 14 percent for Newt Gingrich. This spread turned out to be greater than the overall difference between the two GOP hopefuls in that state; Romney pulled in 46.42 percent of the statewide vote compared to second-place finisher Gingrich's 31.93 percent. But Romney pulled in a larger portion of the Hispanic vote than anticipated. A January 24 Univision/Latino Decision survey found that 49 percent of Florida’s Latino voters would vote for Romney against 23 percent support Gingrich. Prior to Tuesday's vote, GOP candidates sought to make the most of attracting Florida Latino votes in anticipation of appealing to the Latino electorate in other swing states, focusing on issues ranging from Washington’s Cuba policy to Puerto Rico’s status. However, since Cuban and Puerto Rican Americans encompass the majority of Latino voters, the state’s Hispanic electorate differs from Latino voters in other parts of the country.

But Florida’s Latino voters also represent distinct voter blocs and differ from other Latino voter groups in the rest of the United States. Latino Decisions, a website on Latino politics, defines Florida voters in three groups: Cuban immigrants, Cuban Americans, and Central Floridians, who are largely Puerto Rican. There are also Colombian, Dominican, Nicaraguan, and Mexican voters who reflect Puerto Ricans’ voting preferences. Cuban voters represent around 36 percent of Florida’s Latino voters, but split ideologically between immigrants—who tend to vote Republican—and American-born Cubans, who vote Democrat in greater numbers. Puerto Ricans, on the other hand, are a Democratic majority. Though Democratic Latino voters in Florida now outnumber Republicans, Miami-Dade County remains a Republican stronghold; 75 percent of Latino voters are Republican. While Cuban immigrants, Cuban Americans, and Puerto Ricans differ in terms of economic and foreign policies, all groups favor immigration reform. In a January 23 phone panel, Dr. Gary Segura, one of the founders of Latino Decisions, commented on the immigration issue. “The best [candidates] can hope for is to drop the harsh rhetoric. It might allow them to win back some Republican-identified or independent Latinos who may be turned off by that…But there is a group of Latinos in the middle, the independents or the moderate Republicans, and that is who they should be targeting.”

Immigration proved to be a divisive issue among Latino voters, as candidates sought to differentiate their policies. Romney does not support the DREAM Act, and promised to veto it. Later, he backtracked and said he’d support it if it focused on military participation. He promotes a “self-deportation” approach for undocumented immigrants, in which they would have to leave the United States and apply for residency in their country of origin. He also wants to facilitate the immigration process for legal immigrants, saying: “We are not anti-immigrant. We are not anti-immigration. We are the pro-immigration, pro-legality, pro-citizenship nation and party.” But, as an article in The Huffington Post points out, Romney may run into problems with Hispanic voters in other parts of the country, given negative perceptions of his immigration postion. On the other hand, Gingrich says he would make it easier to deport criminal immigrants and fine employers who hire undocumented workers, but wants to modernize the visa process for students and guest workers. He proposed a citizen review panel that would award residency, though not citizenship, to undocumented immigrants with deep ties to the United States. “I am for legal immigration,” he told CBS News. On January 27, he announced his support of a modified DREAM Act proposal, which would provide a path to citizenship for undocumented youth who serve in the military.

Beyond the immigration debate, the fight for Florida GOP hopefuls to share their positions on Latin American issues to an increasing degree. In back-to-back appearances, Gingrich and Romney addressed the Hispanic Leadership Network conference in Miami on January 27. Gingrich criticized U.S. President Barack Obama’s Latin American policy, saying: “He can’t bring himself to look south.” The former House speaker discussed strengthening the U.S. Southern Command and shifting Mexico to Northern Command. On Cuba policy, he voiced hope for Havana to witness a “Cuban spring” by 2013, while on Venezuela he supported a non-military, “but aggressive strategy of replacing [Venezuelan President Hugo] Chávez and giving the people of Venezuela the opportunity to live in freedom.” Gingrich voiced support for Puerto Rico to hold a November 2012 referendum on the island’s status and said that should voters support statehood, he would help with accession.

But it was Romney who earned an endorsement from Puerto Rican Governor Luis Fortuño on Friday. The ex-governor of Massachusetts has said he expects Puerto Rico, which holds its Republican caucus on March 18, to opt for statehood in its upcoming referendum and that he would support the island’s choice. Following his rival Gingrich at the conference, Romney discussed plans for promoting democracy in Cuba, adding: “We will help Cuba become free.” In terms of hemispheric relations, Romney spoke of the mutual benefits of free trade within the Americas, criticizing the Obama administration for its delay in submitting the Colombia and Panama trade pacts. He also pledged that, should he become president, he would bring together U.S. and Latin American businesses within the first 100 days of his presidency. Romney also stressed that he would create a hemispheric task force on security issues related to organized crime and drug trafficking.

Third place finisher Rick Santorum also picked up a Hispanic endorsement while in Florida when he won the backing of the Latin Builders Association. Like Gingrich, he addressed the group on Friday. The former Pennsylvania senator called Venezuela “Cuba Part B” and heralded his connection with the Cuban-American community. During Thursday’s GOP debate, Sanotorum suggested Islamic terrorists hope to build missiles in Cuba—a theory that USA Today says is a “wild claim based most likely on mistranslations of an Italian newspaper report.” Meanwhile, at the same debate, Ron Paul—who took the number four spot in the primary—voiced support for diplomatic relations with Cuba, saying: “I believe with friendship and trade, you can have a lot of influence, and I strongly believe that it's time we have friendship and trade with Cuba.”

As Bolivia nears the scheduled October 18 vote, here is a look at the key players and the role they played in Evo Morales’ downfall.