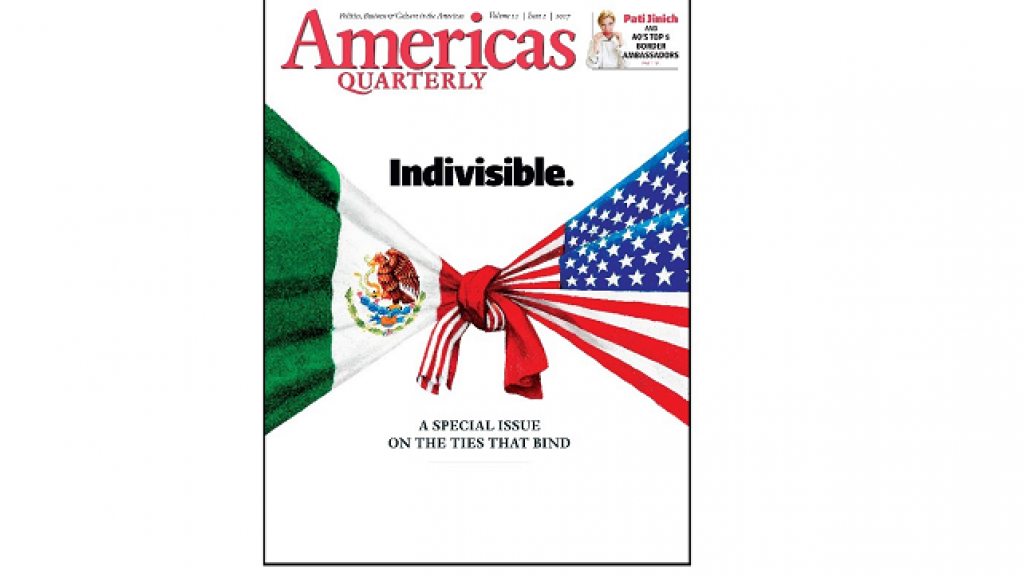 Indivisible: The Truth about the U.S. and Mexico, in the New Issue of Americas Quarterly

The United States and Mexico are interwoven in remarkable and surprising ways that challenge the idea of a clear-cut border.

Americas Quarterly magazine brings substance and originality to the analysis of the U.S.-Mexico relationship.

New York, April 24, 2017—The United States and Mexico are interwoven in ways that are both remarkable and surprising and that challenge the idea of a clear-cut border. In Michigan, some of the factories driving the state’s incipient resurgence are, in fact, Mexican-owned. In Queretaro, 550 miles from the United States, the University of Arkansas will soon join a group of 14 engineering colleges dedicated to the aerospace industry. The topic of the ties that bind Mexico and the United States is explored at length in “Indivisible,” the new issue of Americas Quarterly magazine that looks past the day-to-day political debate to tell a larger story of shared prosperity over the more than two decades since the implementation of the North American Free Trade Agreement (NAFTA). “As a New York-based publication that covers Latin America, we felt compelled to address the issue of the moment: the relationship between the United States and Mexico, and how it’s evolving in the early days of the Trump administration,” writes AQ Editor-in-Chief Brian Winter. “The image on our cover is simple and direct. It speaks to the profound political, cultural, and economic ties that bind our countries together.”

In “Indivisible,” veteran Latin America correspondent Richard Lapper reports from the heart of the U.S. Rust Belt as well as from the Mexican boomtown of Querétaro on how NAFTA has reshaped the manufacturing industry in both countries. The cover package profiles celebrity chef Pati Jinich and Congressman Beto O’Rourke as two of the Top 5 Border Ambassadors working tirelessly to bring the two neighbors closer together. Also included are a personal account on being at home on both sides of the border by best-selling writer and journalist Alfredo Corchado, and an essay on the true relevance of NAFTA by Luis de la Calle, one of the Mexican negotiators of the agreement.

The complete issue will be available online on May 4, 2017 at AmericasQuarterly.org

Americas Quarterly (AQ) is the premier publication dedicated to politics, business, and culture in the Western Hemisphere, with a focus on Latin America. Launched in 2007 and based in New York City, AQ’s award-winning magazine and website appeal to a broad audience interested in the region. Readers include top policymakers in Washington, D.C., Brasilia, Mexico City and beyond; executives at Latin American multinationals and Fortune 500 companies; opinion leaders in universities and the media; and a vast array of general readers who are passionate about Latin America. Editorial board members include former presidents Fernando Henrique Cardoso, Ricardo Lagos, Ernesto Zedillo and Alejandro Toledo, as well as leading voices from business, journalism, finance and academia. Americas Quarterly is an independent publication of Americas Society and Council of the Americas, which for more than 50 years have been dedicated to dialogue in our hemisphere.