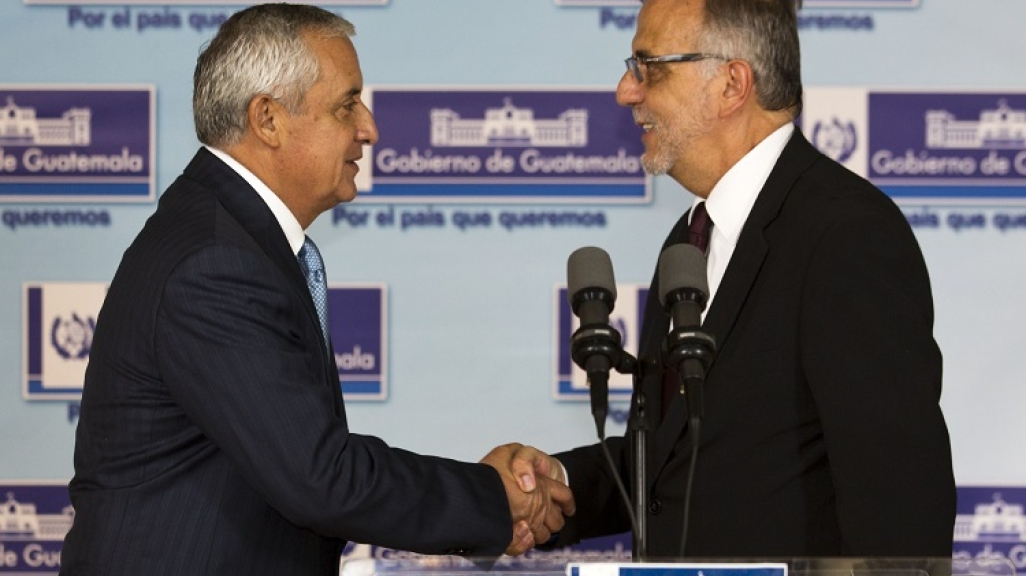 With scandals engulfing his cabinet, what are the legal ramifications for President Otto Pérez Molina?

For the last several weeks, Guatemala has faced two dueling corruption scandals, thus far leading to the resignations of the vice president, three ministers, and the head of the intelligence agency. But the toll doesn’t stop there: the scandals also put 45 high-ranking government officials, judges, businesspeople, and others behind bars, including the president of the country’s central bank and the heads of the country’s taxation and social security bodies. The arrests take place in the lead up to the presidential election on September 6.

Both scandals came out of investigations by the International Commission against Impunity in Guatemala, a special investigatory UN body known as the CICIG, working in tandem with the Guatemalan Special Prosecutor against Impunity (FECI). The CICIG was established in response to a request from the Guatemalan government for assistance; it began its work in the country in August 2007 to support the Public Ministry (MP), which the FECI falls under, and the National Police. The government has extended its two-year mandate regularly since then. While many have lauded the body’s work, Pérez Molina has had an uneasy relationship with the CICIG since 2013, when it prosecuted former dictator Efraín Ríos Montt for civil war atrocities. (At least one witness during Montt’s trial implicated Pérez Molina for his involvement in Guatemala’s civil war, during which he served as a major.) Since last fall and as recently as this past March, Pérez Molina said he would not renew the CICIG’s mandate again, which was set to expire on September 3 of this year, but opted to extend it in the midst of this political crisis.

Over the last several weeks, Guatemalans have held regular anti-corruption rallies, with another scheduled for this Saturday, May 30. Here’s a breakdown of what’s happened.

On April 16, CICIG and FECI investigators announced the arrests of 21 people in an elaborate customs fraud investigation, including the current and former heads of the country’s tax agency. The corruption ring—dubbed “La Línea” for the telephone line which businesses would call to participate in the scheme—included both public- and private-sector figures who operated a plan in which customs taxes on certain shipments were reduced in exchange for bribes paid to the ring. Investigators did not give a total amount, but the number of shipments and known payments would put the total in the realm of a few million dollars.

According to CICIG and FECI investigators, Juan Carlos Monzón, Vice President Roxanna Baldetti’s executive secretary, headed the ring. From mid-April to early May, pressure mounted on Baldetti for her ties to Monzón—who is still on the lam—as she continued to deny that she had any involvement in the affair.

On April 23, as details of the CICIG’s work came to light and public support for the body rose, Pérez Molina requested a two-year extension of the CICIG’s mandate from the UN. On April 25, Guatemalans held their first public protest, calling for Baldetti’s resignation under the slogan #RenunciaYa (“Resign Now”), and on May 8, Baldetti resigned. To date, no formal charges have been filed against her, though the Supreme Court has left the door open to her prosecution and the United States rescinded her and her sons’ visas on May 27.

But, even as protestors celebrated Baldetti’s resignation, the anti-corruption momentum shifted to the Pérez Molina administration, and protestors held their largest rally yet on May 16. Days later, the president dismissed his ministers of environment, energy, and the interior, as well as the head of the country’s intelligence agency over charges of corruption, which the involved deny.

On May 20, a new scandal emerged. This one involves the president’s former personal secretary, the country’s Social Security Institute (referred to locally as IGSS), and the president of Guatemala’s central bank in connection to a $15.7 million contract for a health program that caused multiple deaths.

The second investigation, also carried out by CICIG and FECI through wiretaps, centers around a contract awarded by IGSS board members to the Mexican company PISA to provide kidney dialysis treatment programs. These turned out to be deeply flawed and were thought to have led to the deaths of 15 patients in IGSS hospitals, and many more with infections.   The IGSS president, Juan de Dios Rodríguez, previously served as Pérez Molina’s personal secretary, and the vice president of the IGSS board, Julio Suarez, was president of Guatemala’s central bank. According to investigators, Rodríguez, Santos, and other IGSS officials and businessmen got kickbacks worth 15 to 16 percent of the total contract. Suarez was indicted on May 26 on charges of fraud. That afternoon, Moody’s downgraded its outlook on Guatemala’s bond ratings from stable to negative, citing the ongoing political crisis.

For his part, Pérez Molina has given no indication he’ll step down. “I put my trust in all of these people, but that does not mean I become responsible for what they did,” he said at a news conference last week. This week, the country’s Nobel Peace Prize laureate, Rigoberta Menchú; a prominent businessman; and Guatemala’s national bar association called for Pérez Molina to resign.

Barring his resignation, there are a handful of other constitutional measures that could come into play. Of note, while the president is immune from prosecution or detention as long as he is in office, under Article 161 the Supreme Court could remove his immunity if criminal charges are brought by the MP, as it did Baldetti’s through FECI and CICIG. One journalist did ask the MP to remove the president and vice president’s immunity in January 2014 for abuse of authority. However those charges were dismissed.

Additionally, the Guatemalan Congress could impeach Pérez Molina if two-thirds of all its members vote in favor, per Article 165 (h) of the Constitution, although the magna carta does not specify how impeachment would lead to removal from office. The last president to be removed from office was Jorge Serrano Elías in 1993, who was forced to resign under charges of abuse of authority and unconstitutionality—confronted by none other than Pérez Molina, who was the head of the country’s intelligence agency at the time—after Serrano launched a failed self-coup to dissolve the country’s governing bodies.

Pérez Molina is not himself up for reelection, which is barred under Guatemala’s Constitution. But the scandal already claimed the ruling Patriot Party’s (PP) lead candidate, Alejandro Sinibaldi, who dropped out in the days immediately after the "La Línea" scandal first broke, saying the vice president, at the time two weeks away from resigning, was working to keep him off the PP ticket.

Another leading candidate, Manuel Baldizón, is facing backlash. Although he hails from the leading opposition party, the public has cast him as more of the same—or a “copy-paste,” in reference to a recent incident in which he was caught plagiarizing. On Twitter, Guatemalans have turned his campaign slogan “Te Toca” (“Your Turn”) on its head in two new trends: #NoTeToca and #NoTeTocaBaldizon. The slogan is in reference to the fact that, for the last 20 years, the runner-up in a Guatemalan election has won the subsequent one—Baldizón lost the 2011 presidential election by nine points to Pérez Molina. But in the moment of upheaval, Guatemalans appear to be resisting the sense of inevitability.