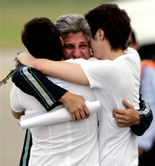 Colombia’s biggest guerilla group appears to be taking contradictory steps. On one hand, the Revolutionary Armed Forces of Colombia (FARC) released several high-profile hostages in the past week. On the other hand, they’ve staged at least one new bomb attack. Starting last week, they began a wave of unilateral hostage releases, sending home three policemen, an army soldier, and two politicians held for more than six years. During the same period, a bomb attributed by the government to the FARC partially destroyed police headquarters in Cali. The divergent moves have been catalogued as ways for the group to regain lost credibility while demonstrating their capacity to carry out military operations. Some reports suggest that the FARC appears to be pushing the matter of the humanitarian exchange of hostages for imprisoned rebels and possible peace negotiations in the lead-up to Colombia’s 2010 presidential race.

On February 5, the FARC freed the last of six hostages it had pledged to release—Sigifredo López, a former legislator from the Valle del Cauca department and the only survivor of 12 lawmakers who were kidnapped at one time. The rebels handed him over to a team led by Senator Piedad Córdoba and the Red Cross. Córdoba remains the top mediator between the FARC and the government. She also faces heavy criticism for her insistence on direct, peaceful negotiations rather than a military solution to the conflict, which spans more than four decades.

Cambio magazine reports that, at the same time as the hostage releases, military intelligence has intercepted communications among FARC members indicating intentions to conduct attacks as a means to show they can still inflict damage at will. Cali’s police force is investigating if the recent bombing at the police command center was in fact carried out by urban FARC commandos or by an organized crime gang that wants to destroy evidence, El Pais reports. Authorities are also investigating a bombing at a Bogota-based Blockbuster that claimed two lives to determine whether the guerilla group carried out the attack.

After a year that left the group devastated, the FARC may be hoping to gain sympathy at home and abroad. A Los Angeles Times editorial describes the release of hostages as “a stunt intended to revive public support for an unworthy cause.” Over the course of 2008, massive protests around the world demanded the release of all FARC captives as well as an end to terrorist activities. Some hostages freed along with Ingrid Betancourt in the Hollywoodesque “Operación Jaque” confirmed that low-ranking guerrillas feel abandoned by their superiors. Another sign of low morale among FARC troops is the high desertion rate; more than 18,000 insurgents  have turned themselves in since President Álvaro Uribe took office in 2002. In a new interview with Al Jazeera’s Riz Khan, Uribe said that at the same time that “we are winning the war,”  the government remains “totally open and generous” to receiving defectors.

The FARC continues to hold 23 “exchangeable” hostages who could be traded for rebels in prison. It remains to be seen whether the insurgents will stage releases while presidential hopefuls warm their engines for the upcoming electoral race. As a Semana magazine article explains, “The FARC believes that with the liberations they are weakening the policy of democratic security and that if [FARC commander-in-chief] Alfonso Cano extends his arm, negotiation will become a fundamental issue in the 2010 campaign. Obviously, the guerrillas would prefer to negotiate with a president who is not Uribe.”

On January 30, El Colombiano reported that Uribe will not seek a second reelection as president, ending months of speculation. Some voiced concern that a third time in office would damage Colombia’s democratic institutions by focusing power in the figure of just one man.

Read an AS/COA analysis about the FARC’s dwindling numbers.