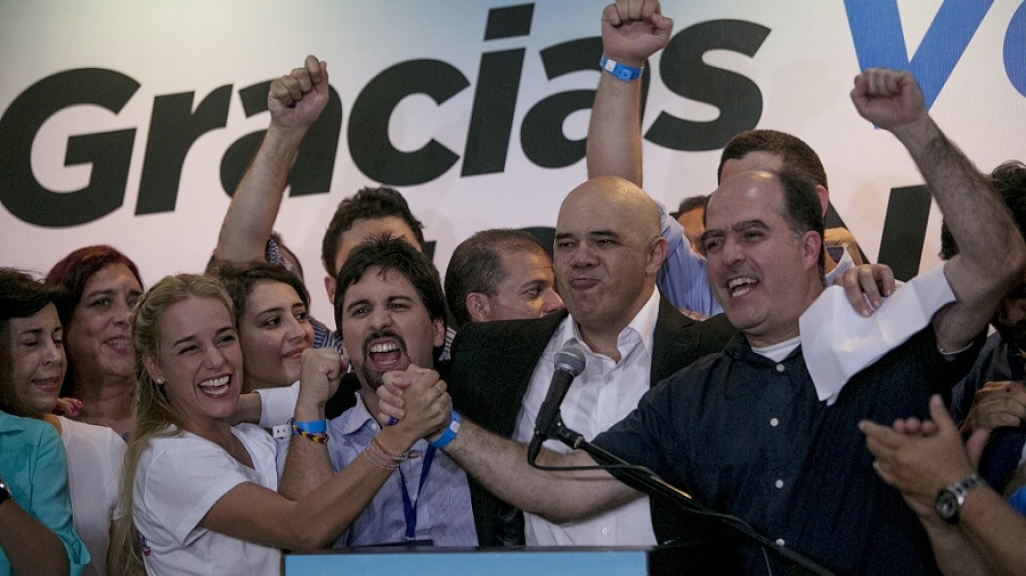 Explainer: Who's Who in the Venezuelan Opposition

Beneath the umbrella of the MUD opposition coalition are more than two dozen groups—with differing ideas about how to challenge embattled President Nicolás Maduro.

Given that President Nicolás Maduro’s approval rating is hovering at 20 percent, challenging him seems like the easy part for Venezuela’s opposition. After the government effectively nullified the powers of the opposition-controlled legislature and quashed their efforts to recall the president, opposition leaders are focused on restoring some semblance of constitutional order to the country. Figuring out the best way to do so is tricky and these leaders often differ on strategy, timetable, and the very words to use. Even the opposition coalition’s head acknowledged the group did a poor job of presenting a clear vision to Venezuelans during what was a tumultuous 2016. Here’s a look at some of the most high-profile leaders within the opposition and the parties they represent.

Venezuela’s opposition is under the umbrella of a coalition: the Democratic Unity Roundtable, known in Spanish as MUD. Officially formed in 2008 to challenge then-President Hugo Chávez, the coalition today comprises more than two dozen parties.

MUD took majority control of Venezuela’s unicameral National Assembly in January 2016, marking the first time a branch of government was not controlled by chavistas since Chávez came to power in 1999.

The four biggest parties within the MUD are Justice First (PJ), Democratic Action (AD), Popular Will (VP), and the New Era (UNT), who together picked up 90 of the 112 seats won by MUD in the December 2015 legislative elections. In recent months, Vatican-brokered talks between the MUD and government divided the coalition, with some leaders more amenable to negotiating with the chavistas, while others said they were past the point of dialogue. The talks ultimately broke down in December with few gains, and with weakened public support for MUD.

MUD head Jesús “Chuo” Torrealba, 58, was one of the initial proponents of the talks and took heat when they fell apart, in particular for forestalling momentum on the effort to recall Maduro by the end of 2016. On January 9, he told listeners of his radio program that no one from the coalition will be present on January 13 when government and Church officials attempt to reignite the talks.

Henrique Capriles, 44, currently governor of the state of Miranda, is one of the most well-known opposition leaders, running as the MUD’s candidate in the last two presidential elections. In October 2012, Capriles lost to Chávez by 11 points, and to Maduro by just 1.5 percent in the April 2013 special election called in the wake of Chávez’s death. A member of Justice First, Capriles’ main message is to hold elections to achieve change, as well as marches, to the extent they are means for the people to express themselves. He opposed the recent talks on the principle that they gave a voice to Maduro and not the people, and said he only found out about the talks on TV.

In Congress, Justice First holds the most seats of any opposition party, with 33 out of 167. Julio Borges, at the helm of the party, took over the Assembly presidency on January 5. Like Capriles, he’s in favor of elections. However, he has also called for civil disobedience—which Capriles is cautious about—as a way to restore constitutional order broken by Maduro. Although seen as a more moderate tactician than his predecessor, Henry Ramos Allup, Borges has twice been bloodied by chavista supporters on the streets.

But the Borges-led Assembly made no plans to sit back when, on January 10, it opened a hearing into the charges that Maduro has abandoned his duties as president, even if it did so with a less-than-unified front. One of the people working to coalesce support for the measure along with Borges is Freddy Guevara, a 30-year-old former student leader and rock musician-turned-congressman from Miranda and the Assembly’s first vice president. He is also the national coordinator for elections for the progressive Popular Will party and was active in the recall referendum effort.

Another top priority for Popular Will members? Getting their leader, Leopoldo López, out of prison. The Maduro government jailed López over charges he incited violence in February 2014 protests, charges international observers say were cooked up so he wouldn’t pose a political threat. López, 45, initially planned to run in the 2012 primaries, but ultimately decided not to so that the opposition could rally behind Capriles and against Chávez. His wife, Lilian Tintori, 38, is one of the most prominent unelected figures within the opposition and internationally, thanks to her indefatigable lobbying efforts for her husband’s release and Maduro’s ouster.

Democratic Action is the oldest party in the coalition, founded in 1941, and while it still represents the second-biggest opposition bloc in Congress with 25 seats, its influence is on the wane. Top party brass Henry Ramos Allup, 73, is an old-school statesman, first elected to the legislature in 1994. And though he spent 2016 as the first president of the MUD-controlled Assembly, his time at the helm ended with few concrete achievements, despite his often fiery rhetoric and open challenges to the military ranks. After holding sway for decades, Democratic Action last won the presidency in 1988 with the election of Carlos Andrés Pérez, whose term was marred by the Caracazo episode, when government troops opened fire on and killed several hundred civilian protesters.

If figures like Borges prefer to move behind the scenes, María Corina Machado, 49, takes the opposite approach, by taking to the streets and social media. A primary organizer of the 2004 recall vote on Chávez and the 2014 protests against Maduro, she’s a frequent target of pro-government attacks—sometimes literal ones. She resigned from her seat in the Assembly in 2014 after chavistas accused her of treason for what they said were her efforts to destabilize the government and moved to strip her of her post. Though the country’s electoral body banned her from running in the 2015 legislative elections, the party she founded holds a few seats. She’s criticized the MUD, too, especially for scrapping plans for national protests as a concession to the government at the start of the Vatican-led talks.

Henri Falcón, 55, is governor of Lara and one of the highest-ranking ex-chavistas within the opposition. Originally part of Chávez’s Bolivarian student movement in the mid-1990s, he became a congressman in 1999 when Chávez first came to power. But by the late 2000s, he began to distance himself from the president and in February 2010 officially broke ties with the United Socialist Party of Venezuela (PSUV). Today, his message focuses on the need for consensus building in the name of stability in the eventual aftermath of the Maduro presidency. Members of Falcón’s and Machado’s parties in the National Assembly were openly divided during debate on Maduro abandoning his post.

The recent thorn in the side of the MUD is the New Era party. After other parties gave up on the Vatican-led talks in December, UNT secretary Timoteo Zambrano, 61, said he’d continue in the dialogue, meeting with PSUV’s Tareck El Aissami, now the next in line to the presidency should Maduro fail to finish his term. Zambrano may have been smarting after getting kicked off of MUD’s leadership board in September after he criticized moves to suspend Venezuela from the Mercosur trade bloc. Also in December the Assembly was unable to hold a crucial vote on appointments to the electoral branch after UNT members didn’t show up and the body failed to meet quorum. The move incensed Popular Will leaders, who called into question the party’s membership in the MUD, though UNT suspended the absent lawmakers the following day. But with 17 UNT members still in the legislature—the same number as Popular Will—the MUD can’t afford to cut out the UNT and risk further fracturing their base. On December 31, the government released UNT party founder and former presidential candidate Manuel Rosales, 64, from prison. Local MUD officials affirmed they'll be on hand to welcome Rosales back to his home state of Zulia at a rally on January 12.