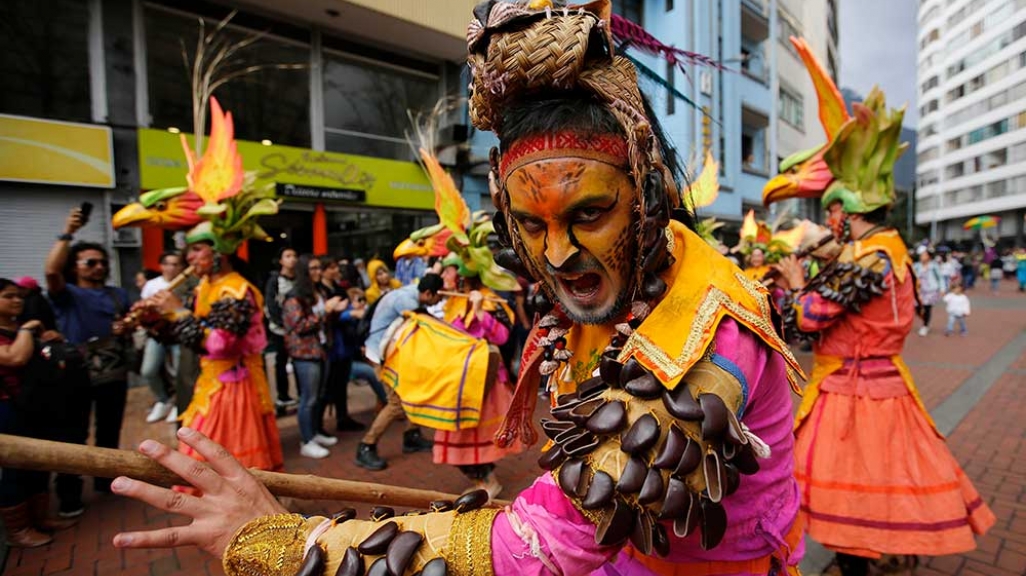 Dancers at the Ibero-American Festival in Bogotá. (AP)

Explainer: What Is Colombia's Orange Economy?

Whereas commodities can be uncomfortably volatile, President Iván Duque is banking on the creative industries to undergird economic growth.

On November 29, a novel bond auction took place in Colombia, one of the first of its type in the world. But investors weren’t bidding on traditional projects like highways or ports—they were bidding on bonds to build cultural infrastructure, which could include everything from loans to jewelry makers and software developers to fiber-optic networks.

The so-called “orange bonds” are part of the Orange Economy, which refers to a country’s creative industries, one of President Iván Duque’s key proposals during his campaign and the first 100 days of his administration. Duque didn’t come up with the idea of the creative economy—that would be British theorist John Howkins—but he, along with fellow Colombian co-author Felipe Buitrago Restrepo, wrote the original manual that lays out the Orange Economy during his decade at the Inter-American Development Bank (IDB). Duque has since brought on Buitrago as an adviser to his administration.

At the auction, Duque said he didn’t want the creative industries to grow in an “untamed manner” but rather channel and formalize them so that creators can get their due credit (and royalties) and the country can leverage the industry’s production and exports. Duque’s goal is to have the Orange Economy represent 10 percent of Colombia’s GDP, up from the 3.3 percent it makes up currently, putting it roughly on par with the manufacturing industry.

But before getting too far into his proposals, here’s a look at what the Orange Economy is.

What is the Orange Economy?

The creative economy is the sector whose goods and services are based on intellectual property, estimated to make up about 6 percent of the world’s GDP. The Orange Economy, for its part, comprises cultural industries divided into three categories: 1) traditional works for which there is often an artifact (books, newspapers, magazines, libraries, film, television, photography, radio), 2) other works that are based more in experience (visual and performing arts, dance, opera, fashion, design, museums, architecture, gastronomy), and 3) new works that tend to be digital or multimedia and have come about in the last half-century or so (video games, software, advertising, new media). Infrastructure in the creative industries can also include physical spaces such as plazas, commercial and community centers, parks, and stadiums, as well as virtual infrastructure like radio antennas, satellites, and fiber-optic networks.

One defining characteristic of an Orange Economy product is that it has a distinct intellectual property claim, meaning however far the piece of work travels or is exported, its creator retains some form of ownership. A developer in Medellín could create an app that is copyrighted and licensed, so that every time someone downloaded it from anywhere in the world, the developer would receive a royalty, which would contribute to Colombia’s GDP.

It’s worth noting that Duque and Buitrago include ecotourism and sports in the “other” category as they are distinct cultural industries that generate income. That said, there is debate about whether the two sectors are part of the Orange Economy since it is more difficult to claim intellectual property on their works.

The report states that, “Culture is not free,” and as such, creatives should be formally recognized and fully compensated for their labors. On the one hand, this could be music to the ears of the overworked members of the gig economy who are constantly asked to give away their work for free or for “exposure.” But the same moves by governments to formalize and recognize the industry can also cause creatives to bristle at the thought of government regulation of the arts.

Why promote the Orange Economy in Latin America?

Duque and Buitrago highlight the Orange Economy as a boon for Latin America, because they acknowledge the region cannot match China’s cheap labor force, and also because of high rates of Latin American urbanization, given that city residents tend to be better connected digitally.

In his inauguration address in August, Duque said that one of the goals in developing the Orange Economy was to lessen the country’s dependence on natural resources, which can fall prey to volatility. Oil, which makes up one-fifth of the Colombian government’s revenues, took a big hit after the barrel price crashed in 2014. Additionally, the 485-mile Caño Limón oil pipeline has been attacked 68 times in 2018, most often by the National Liberation Army guerilla group. On top of this, some of Colombia’s biggest traditional infrastructure projects have been fraught in recent years: the $4 billion Ituango Dam project incurred another $2.2 billion in costs after a crisis in April forced the evacuations of 25,000 people and the near loss of the entire project.

In light of such events, investments in technological infrastructure like a fiber-optic network that brings online creatives in the growing city of Bucaramanga near the Venezuelan border and in contact with consumers around the world might well be a safer bet by comparison. Moreover, say money managers, there is a growing interest in socially responsible investments.

What kind of interest exists in the Orange Economy?

At the end of the “orange bonds” auction day, more than 320 investors bid on $124 million of bonds issued by Bancóldex—and investor demand was more than twice that, according to the official report. The minimum bid was about $3,100, and all loans were backed by a triple-A rating. The project, which was supported by the IDB as well as the Dutch government, also fits in alongside the 2030 UN development goals of livable wages and development, innovation and infrastructure, and sustainability.

The auction was a bright spot in what has otherwise been a trying first 100 days for the Colombian president. The auction coincided with the 50-day mark of a university student strike. Duque, who was forced to back off a proposed tax hike after public backlash, saw his favorability rating fall to 28 percent in a Datexco poll taken during the last week of November.