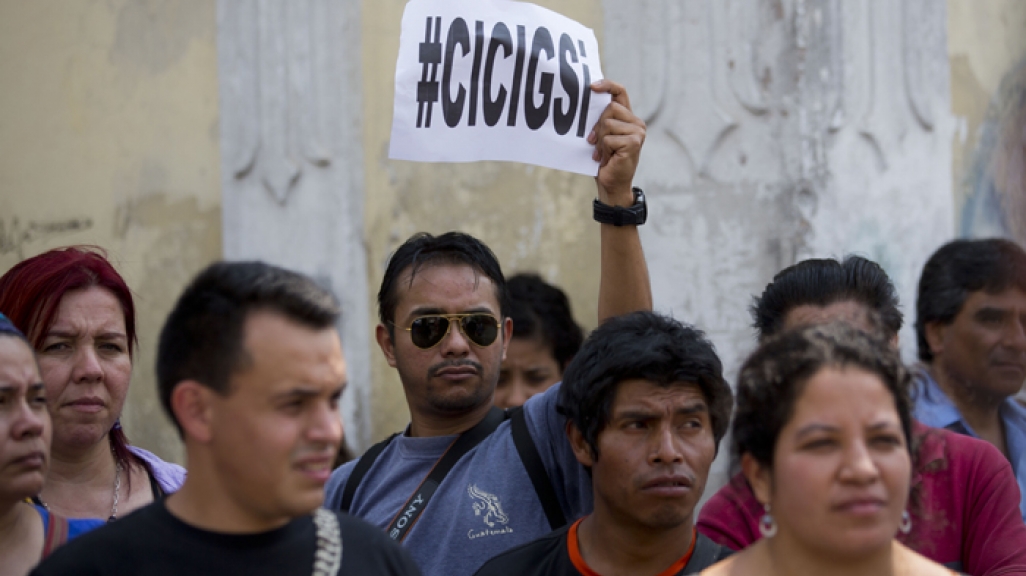 Guatemalans rally in support of the CICIG at an anti-government protest. (Image: AP)

Explainer: What Is the CICIG?

The UN-backed body that fights corruption in Guatemala caused an unprecedented event: a sitting president’s resignation. Other countries are taking note.

For decades, criminals and government officials alike could act with impunity in Guatemala, leading to systemic corruption and a mounting swell of public unrest. But something changed in recent years. Now charges are being filed and perpetrators are being held accountable, and one organization is at the forefront of this sea change: the International Commission against Impunity in Guatemala, known as the CICIG. In 2015, it achieved the unprecedented: the resignation of a sitting president, Otto Pérez Molina, his vice president, and dozens of other high-level officials involved in a series of bribery scandals.

What Is the CICIG?

The CICIG is a UN-backed investigative body that works in conjunction with the country’s Public Ministry (MP) and other institutions to “strengthen the rule of law in a post-conflict country.” It is the first time an international body has the authority to conduct criminal proceedings in national courts, per the UN.

The agency operates on two-year mandates, which the Guatemalan government can opt to extend. To do so, the country’s president sends a letter to the UN’s secretary-general requesting the renewal. The CICIG’s budget runs between $12 and 15 million per year and is funded through voluntary contributions from the international community. It currently employs 150 people from 20 different countries; and its two main bodies are the Presidential Commission, comprising the heads of various branches of the Guatemalan government and serving as a bridge between the presidential administration and the CICIG, and the Special Prosecutor against Impunity, known as FECI, a unit that handles the highest-profile cases.

2004: President Alfonso Portillo, in conjunction with the UN, signs off on the creation of such an organization, called CICIACS originally, but Guatemala’s Constitutional Court rules it unconstitutional.

2006: The Constitutional Court approves a second proposal, this time for the CICIG, which will work in conjunction with the country’s Public Ministry.

2007: The Guatemalan Congress ratifies the CICIG’s mandate, and its work begins.

2015: In the spring, after initially saying he would not renew the group’s mandate, then-President Otto Pérez Molina requests its extension in light of twin scandals. Months later, Pérez Molina himself is brought down by the CICIG and MP’s investigations. In September, Honduras announces it will launch its own investigatory body, this time in conjunction with the OAS, dubbed the MACCIH.

When and Why Was It Started?

The CICIG officially began its work in Guatemala in 2007, but its antecedents go back years. In the 1960s, left-wing guerrilla groups started an internal armed conflict against Guatemala’s then-military dictatorship. This began a 36-year war that led to 200,000 recorded casualties.

As part of their defense strategy in the 1970s, the Guatemalan government created a special military unit known as the EMP to protect the president. Over the years, however, the groups’ tactics morphed from defensive protection to proactive threats and intimidation of political opponents, human rights workers, student activists, and others, and they became known as Illegal Clandestine Security Apparatuses, or CIACS. With connections to government officials and elite figures, CIACS carried out their operations uninhibited, leading to a sophisticated and systemic organized crime network and creating a culture of impunity. Documents from the Guatemalan government and the U.S. Department of Defense obtained by the U.S. National Security Archives found the groups to be responsible for the extrajudicial killings and disappearances of hundreds of Guatemalans, and a handful of high-profile assassinations, including that of 75-year-old Bishop Juan Gerardi in 1998, two days after he published a report on war crimes committed during the civil conflict. Although these groups were officially retired at the end of the war in 1996, their clandestine operations continued.

In 2003, Guatemalan human rights groups proposed the creation of an independent commission that would work with the state to investigate and dismantle the CIACS. The government turned to the UN, and in 2004, then-President Alfonso Portillo signed an agreement with the body to launch such a program. However, the Guatemalan Constitutional Court ruled the proposal unconstitutional on the basis that the commission’s work would interfere with the MP’s jurisdiction. The measure was tabled.

But with increasing violence in the country—including a murder rate that nearly doubled from 1999 to 2006—human rights organizations continued their lobbying efforts, and in 2005 the Portillo administration picked the issue back up, and, working with the UN, came up with a proposal where the independent commission would work in conjunction with the MP to investigate and prosecute crimes with the aim of strengthening the country’s institutions. Finally, in December 2006 the UN and the Guatemalan government signed the new agreement establishing the CICIG. This time around, the court gave positive reviews, and the Guatemalan Congress ratified the agreement in August 2007.

Who Has Headed the CICIG?

Spanish prosecutor Carlos Castresana serves as the CICIG’s first commissioner. During his tenure, Guatemala began to use wiretaps and witness protection for the first time, conducting investigations that led to the convictions of powerful criminals, dozens of officials, and hundreds of policemen. In 2010, however, Castresana resigned, citing a lack of institutional support. He also criticized the Guatemalan Congress for not passing anti-impunity laws.

The UN secretary-general then selected the Costa Rican Attorney General Francisco Dall’Anese to replace Castresana. His administration worked to solve high-profile cases, including a child trafficking ring that implicated the upper echelons of power, but at least one Constitutional Court judge accused his office of intimidation. Dall’Anese stepped down at the end of his term in 2013.

The CICIG’s current commissioner is Colombian Iván Velásquez. Velásquez previously served in Colombia’s Supreme Court, where he investigated links between members of Congress and paramilitary groups. Velásquez’s work has been widely praised—even by figures such as Portillo, whom the CICIG prosecuted for money laundering and who was a vocal critic of Castresana in particular. Velásquez is now celebrated in Guatemala for leading a corruption investigation that led to Pérez Molina’s impeachment.

One other crucial figure is Claudia Paz y Paz, who worked closely with the CICIG as Guatemala’s attorney general and head of the MP from 2010 to 2014. One of four daughters born to a middle-class family, Paz y Paz worked her way up through Guatemala’s legal field, and was a legal advisor in Bishop Gerardi’s office at the time of his death. The Public Ministry notched some 5,000 convictions for serious crimes during her tenure, many dating back to the country’s civil war, including two of the country’s most high-profile cases ever: the sentencing of four soldiers to life in prison for the killing of all 201 residents of the town of Dos Erres in 1982, and prosecution of former dictator Efraín Ríos Montt for the genocide of almost 1,800 indigenous Maya Ixil Guatemalans in 1982 and 1983.

Although the Constitutional Court threw out Ríos Montt’s conviction two weeks later on procedural errors, the international community heralded Paz y Paz’s work in the case and she was shortlisted for the Nobel Peace Prize in 2013.

Has the CICIG Ever Faced Pushback?

Despite the CICIG’s successes over the years, its continued viability in the country has not always been a given. While Guatemala extended the CICIG’s mandate with little fanfare the first three times it came up, in the fall of 2014, then-President Pérez Molina said he had no plans to renew it in the upcoming year. Relations were tense between the CICIG and Pérez Molina, as well as with the MP, and Pérez Molina kept the incumbent Paz y Paz off a list of attorney general candidates. “It’s time for the country to learn how to walk on its own,” said then-Interior Minister Mauricio López Bonilla.

But on April 16 of this year, the CICIG announced a bombshell: the arrest of 21 people in an elaborate customs fraud tax evasion scandal, dubbed "La Línea," headed by the vice president’s personal secretary. The following week, a panel Pérez Molina himself had put together to assess the utility of the CICIG’s work came back with its unanimous recommendation that the commission’s mandate be extended until 2017. The next day, as public outrage mounted over "La Línea" and systemic corruption, Pérez Molina announced he would renew the CICIG’s mandate, and sent a letter requesting as much to the UN the following month.

What Are the CICIG’s Standout Cases?

By the end of its third mandate in 2013, the CICIG had investigated 150 cases and helped prosecute an additional 50, related to everything from drug trafficking to evidence tampering to money laundering. CICIG investigations led a Guatemalan court to issue arrest warrants for several high-level officials in the police and intelligence forces in former President Óscar Berger’s administration for the deaths of ten prisoners. In 2014, the CICIG dismantled the prison criminal network headed by Byron Lima Oliva, a former Army general imprisoned since 2001 for the killing of Gerardi who frequently made trips outside the prison and ran an extortion ring. Later that year, the CICIG and MP together arrested the head of a notorious drug family in the country, along with nine associates on charges of murder and kidnapping, among others.

The CICIG hasn’t always been the antagonist of government officials either: in 2011, it acquitted then-President Álvaro Colom of involvement in the death of Rodrigo Rosenberg, a Guatemalan attorney who, in a videotaped message, implicated the president and his wife in his death days before he was found dead in a Guatemala City park. The CICIG assigned more than 300 officials, including attorneys and investigators, to the case and concluded that Rosenberg had planned his own death.

But few cases compare in scope to the twin 2015 scandals “La Línea” and another one involving the country’s social security administration. The toll was staggering: by early in the summer, several dozen officials were charged or arrested, including the president of the Central Bank. Then-Vice President Roxanna Baldetti resigned after the MP filed charges against her.

Although Pérez Molina denied any proof of his involvement and held on to the office as long as he could, on September 1, days before the first round of presidential elections, Congress stripped him of his presidential immunity. The next day, as the MP prepared to file charges against him for his involvement in “La Línea,” Pérez Molina submitted his resignation to Congress and found himself on trial as a private citizen within 24 hours.

Will Other Latin American Countries Adopt the CICIG Model?

But leaders weren’t so eager to jump on board. Honduran President Juan Orlando Hernández balked, saying, “If we depend on other countries, when are we going to solve our own problems?”

That spring and summer, however, with anti-corruption protests taking place nearly weekly in Guatemala and starting up in Honduras, Hernández changed his tune. On September 28, he signed an agreement with the Organization of American States to create Honduras’ own investigatory unit. This one, dubbed the Support Mission against Corruption and Impunity in Honduras, or the MACCIH, will similarly work in conjunction with the country’s Public Ministry and on a two-year mandate. While international groups have given their initial support to the MACCIH, observers are not so sanguine about its ability to be effective; the body will only be able to assess problems and draw up reports, but will not be able to enact judicial proceedings and, moreover, will not be able to act independently. 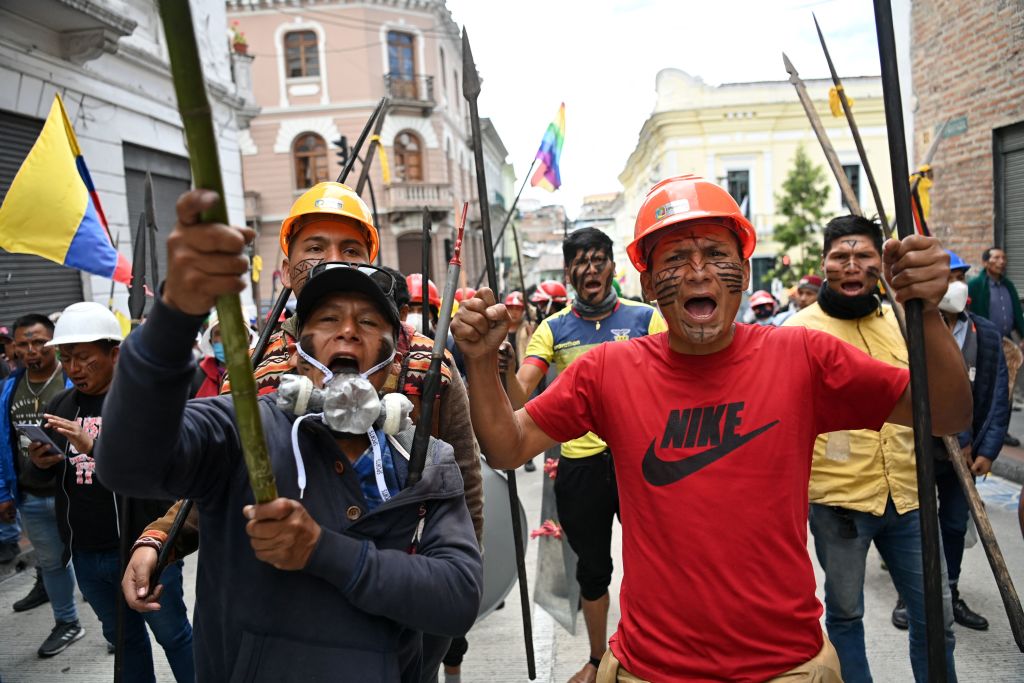 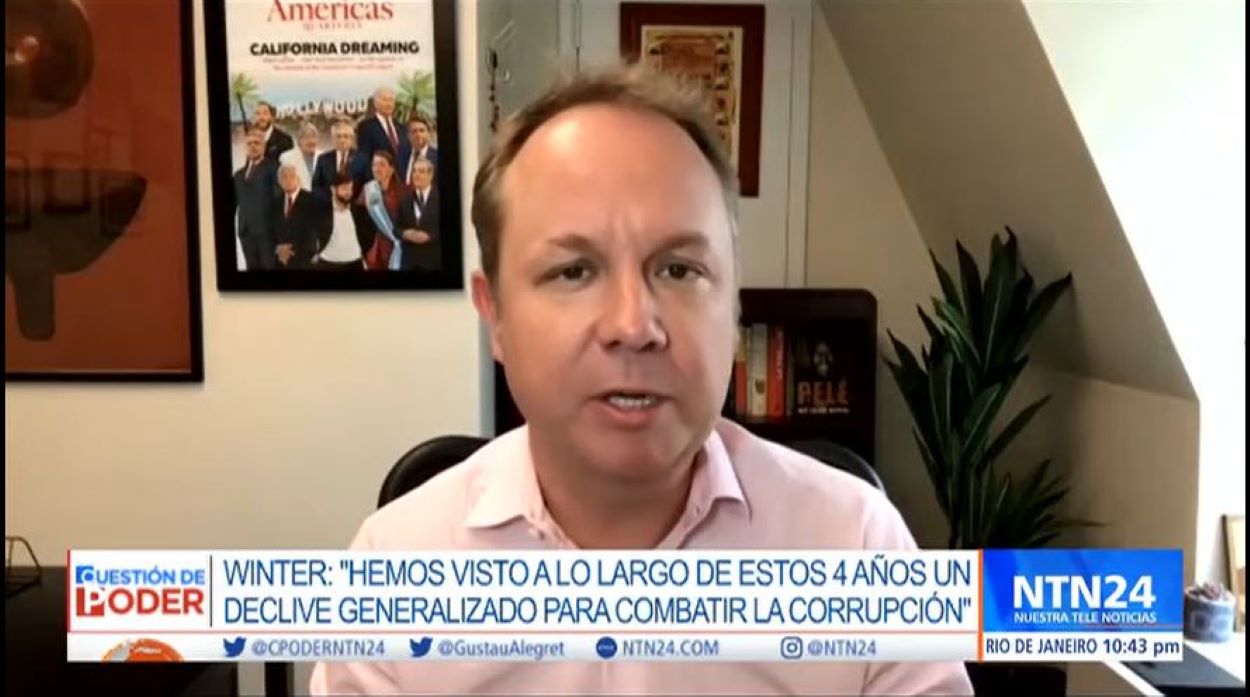