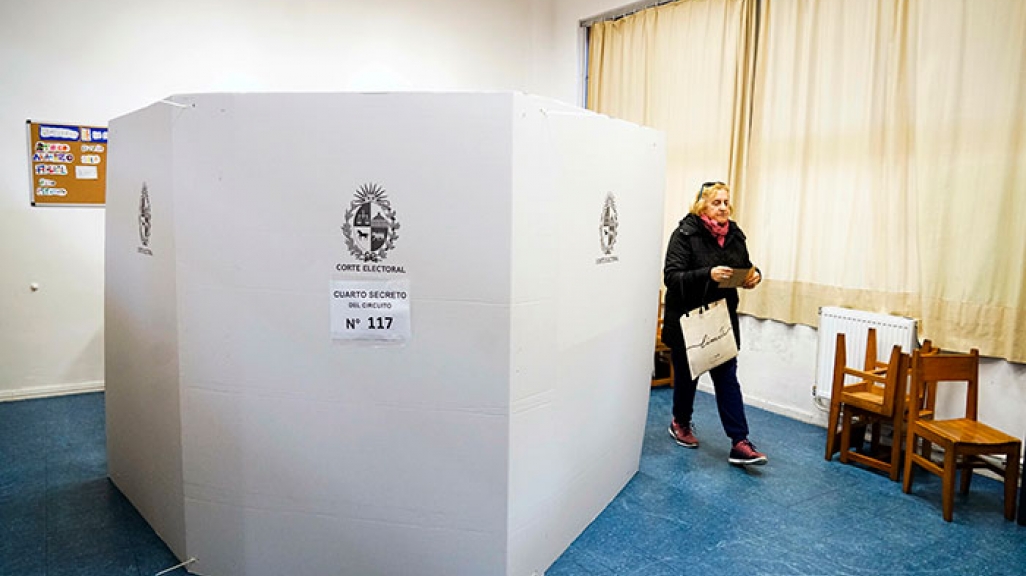 By Luisa Horwitz and Luisa Leme

With the primary behind Uruguayans, here’s a look at who’s in the running and other issues coming up in the October 27 vote.

As in much of Latin America, dissatisfaction in Uruguay is on the rise. Crime is up, and a 2018 Latinobarómetro survey found that Uruguayans’ support for democracy was at its lowest since 1995. President Tabaré Vázquez, who represents the 15-year-long ruling Broad Front coalition, has an approval rating of just 28 percent—far lower than the 62 percent level he held at the end of his 2005–2010 term. Only 22 percent of Uruguayans say the country’s economic situation is good.

AS/COA Online provides an overview of the election and explains who is in the running.

More than 2.7 million people are eligible to participate in the October 27 election for president, vice president, all 99 seats in the House of Representatives, and all 30 Senators.

Should no presidential candidate receive at least 50 percent plus one of the votes, a runoff takes place November 24. The elected president takes office March 1 of next year. Presidential terms last five years and incumbents are not eligible for consecutive reelection but may run again after sitting out one term, and terms are not limited.

A who’s who in the race

Daniel Martínez, Broad Front: Running for the ruling coalition, the former Montevideo mayor and engineer Daniel Martínez, 62, is a business-friendly candidate who appeals to voters across the political spectrum. He won the Broad Front candidacy with 42 percent of primary ballots cast within his party. He was affiliated with the Socialist Party in 1973, and formed a strong relationship with Vázquez, who named him minister of industry, energy, and mining during his first term.

In the 2009 elections, Martínez ran in the primaries for the Broad Front and lost. At the helm of the capital from 2015 until April 2019, Martínez's success in giving Montevideo a positive fiscal balance for three consecutive years boosted his candidacy within the coalition.

Martínez is proposing a National Plan for Science, Technology and Innovation with an increase to the budget of the government’s work in this sector. He proposes technical education to adequately equip 80,000 workers yearly without a high school degree, giving them an equivalent certificate to meet new labor demands and close Uruguay’s skills gap. Graciela Villar, a former union leader and Montevideo city councilwoman, is running for the vice presidency alongside Martínez.

Luis Lacalle Pou, National Party: Son of former President Luis Alberto Lacalle and Senator Julia Pou, he has served in public office since elected to Congress in 1999 and, at 46, is the youngest presidential candidate in this election, winning 53 percent of the primary vote within his party. Lacalle Pou is a conservative candidate who has often opposed Broad Front’s social bills in areas like healthcare and marriage equality. After Broad Front’s three terms in power, he looks to appeal to disheartened voters who seek an alternative, appealing to issues such as the high cost of living. He has called for austerity measures to mend Uruguay’s fiscal deficit, which hit nearly 5 percent in May 2019, 2 percentage points over what the government forecast to end 2019 with and higher than the 3.5 percent at the start of Vázquez’s term in 2014.

Lacalle Pou also ran for president in 2014, coming in second by a margin of 13 percentage points with 41 percent of the votes and Vázquez winning with 54 percent in the runoff. He won the June primaries in his party with nearly 54 percent of the vote—a significant portion of all ballots cast given that the National Party received 41 percent of votes in the primaries, in comparison to 24 percent for the Broad Front. National Party President Beatriz Argimón is Lacalle Pou’s running mate.

Ernesto Talvi, Colorado Party: Despite the fact that two-term President Julio María Sanguinetti led polls within his party in the runup to the primaries, Talvi staged a surprise win.* The 62-year-old son of immigrants and a Chicago-educated economist, Talvi made education a priority and said he would create 136 public high schools in poorer neighborhoods nationwide. He also pledges to improve police training and prisons, support foreign officials to focus on attracting investment to attract more investment, and lower costs for public services. Robert Silva is his running mate for vice president.

Guido Manini Ríos, Open Forum: The general and former head of the army—who Vázquez fired for questioning judicial rulings charging military officials for torture during the dictatorship—announced his candidacy in April under a far-right political party founded in March 2019. Drawing comparisons with Brazil’s Jair Bolsonaro, Manini Ríos pledges to fight crime and combat corruption, promote education, and restore Uruguay’s security to what he calls “historic levels” during the military dictatorship by giving prison guards more authority and creating a maximum-security military prison. The new party Open Forum secured the fourth-highest number of votes in the primaries.

In a July 29 poll by Equipos Consultores, Martínez held 30 percent, Lacalle Pou polled at 26 percent, and Talvi came in third place with 15 percent. The National Party, despite holding the number 2 spot, may be threatened by the growth of the Colorado Party and Open Forum. The poll also compares how the parties are faring now with their standing in July 2014, showing stronger opposition to the long-in-office Broad Front.

One vote goes ahead, another doesn’t

Voters won’t just be casting a ballot for president come October: they will participate in a plebiscite on security as well. This issue is a top concern, given that the country saw 414 homicides in 2018—up from 283 the prior year.

In May 2018, Senator Jorge Larrañaga began a campaign called “Live without Fear” for a security reform plebiscite that earned more than 400,000 signatures—well above the minimum 270,000—to allow the vote to occur on October 27. The proposed reforms include: lifetime prison terms for those convicted of serious crimes without early release, solitary confinement for 30 years for serious crimes, legal night raids by police where deemed fit, and the formation of a national guard. The plebiscite became an election issue among the opposition. On election day, voters will choose whether to approve the creation of a new law, but it must then be passed by the legislature.

However, the proposal has its detractors. Lacalle Pou stated he will not support the referendum campaign. The proposed reform also faces resistance from human rights groups such as Amnesty International, which claims that a national guard and legal night raids would pose a risk to civilians.

While the security vote advances, another vote won’t. On August 4, only 8 percent of eligible voters—well below the 25 percent national vote needed—backed an initiative that would have allowed Uruguayans to vote for the repeal of the Integral Trans Law in a referendum in October. The transgender rights bill, passed in 2018 and implemented in April 2019, added a gender identification option and legal name changes on official documents, as well as promoting the inclusion of this community in the health and educational systems and creating labor quotas. Had it made it to the October vote and repealed, the change would have been constitutionally binding.

*Editor's Note: This article previously referred to Julio María Sanguinetti as “her” and the sentence has been corrected.