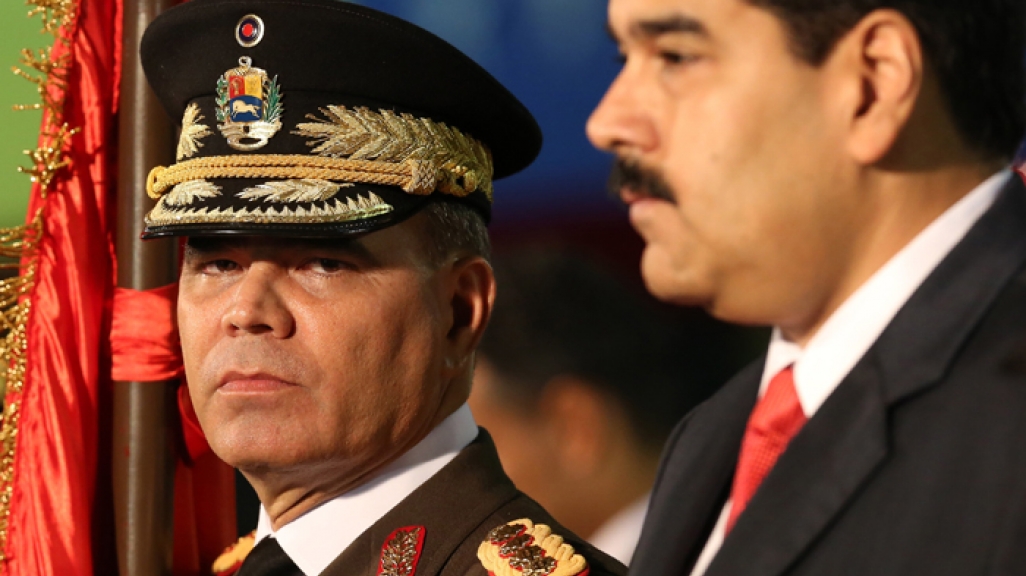 Explainer: The Role of the Venezuelan Military in Politics

In light of recent moves by President Nicolás Maduro, we survey other moments when the military was front and center in Venezuelan political life.

As his popular support withers amid a debilitating economic crisis, Venezuelan President Nicolás Maduro is actively bolstering his rapport with one group: the military, which has a complicated role in Venezuela’s political history.

On July 11, in an unprecedented move, Maduro announced he was putting all the country’s cabinet-level departments under the leadership of the defense minister, Vladimir Padrino López, whom he elevated to a “superminister” position. Some analysts say putting ministers under military control is akin to ushering in a soft military coup. Congressional Speaker Henry Ramos Allup of the opposition reiterated his criticism of Maduro for using the armed forces for political purposes in violation of the Constitution.

Then, on July 12, Venezuela’s military took over operations at five high-volume port cities in a bid to ensure commercial activity continues as Venezuela’s economy collapses. “It’s not an intervention, but if necessary the state has all the means to do so,” said Padrino.

But while unprecedented, the move is hardly the first time the armed forces have stepped into the middle of a heated political arena. “During crises, the military has overseen transitions, but part of that is making sure that one group or another loses,” says Daniel Lansberg-Rodríguez, a constitutional expert and professor at Northwestern University’s Kellogg School of Management, who notes how the Venezuelan military has alternatively turned on their own and supported ousters and also kept the peace during volatile moments. “So while the military has always been a sort of important part of Venezuela’s crisis management, it’s not necessarily for the better, and it’s not necessarily monolithic when they do,” he told AS/COA Online in January.

Here is a look at moments in modern Venezuelan political history in which the armed forces played a critical role.

Backed by popular and political support, the Venezuelan military overthrew President Isaías Medina Angarita, a former general, in October 1945. Historians are split over whether this coup was ultimately a detriment to constitutional stability or if it accelerated much-needed democratic reforms, such as women’s right to vote. Over the course of the following three years, the country instituted a new constitution and held its first democratic elections, including a presidential vote in 1947, which Rómulo Gallegos won.

But the movement was short-lived. In November 1948, a military coup co-led by Army General Marcos Pérez Jiménez along with two other officials ousted the new president and took over. The military junta voided the new constitution and outlawed Gallegos’ party. Four years later, Pérez Jiménez called for an election, but when the vote tallies started to indicate he’d lose, he scrapped the results and, in December 1952, the armed forces declared him the country’s provisional president.

Five years into Pérez Jiménez’s administration—which was marked by deterioration of democratic rights and the strengthening of the national secret police—Venezuela was due again to have elections in 1957. The president, fearing a similar undesired result as in 1952, again nixed the vote and replaced it with a plebiscite, which he supposedly won in a landslide. But nearly everyone, including members of the ruling junta, called the vote unconstitutional and the results fraudulent, refusing to recognize them. All the same, Pérez Jiménez was sworn into office in December 1957.

But his support had worn thin, from the public and also from within the country’s other branches of the armed forces. While a January 1 coup attempt headed by the air force failed, it galvanized popular support, and on January 23, a second movement fueled by a general strike with support from the navy succeeded in removing Pérez Jiménez. The day is now celebrated as a national holiday for democracy.

Although it didn’t involve a change of power, February 28, 1989, was a nadir and subsequent turning point in the Venezuelan military’s role in society. That day, a large riot broke out across Caracas’ poorer neighborhoods over a series of structural adjustment reforms. The government of Carlos Andrés Pérez sent military soldiers—many of whom were from the lower classes themselves—to tamp down protests. Several hundred people were killed, and the event left many distrustful of the state turning against its people, a sentiment that many argue opened the door to Hugo Chávez’s presidency.

On February 4, amid rising poverty, a rebel group of Venezuelan soldiers led by then-Lieutenant Colonel Chávez attempted to overthrow Pérez by attacking the presidential palace with tanks. Chávez was arrested, and in a televised address, famously told his supporters to surrender “for now.” Nine months later, while Chávez sat in prison, rebel soldiers again attempted a coup, but failed.

Pérez, however, after years of rising social tensions over income inequality through the Caracazo and coup attempts, was still a leader with diminished governing legitimacy, and the following spring, Congress impeached him on charges of misappropriating $17 million worth of public funds. The armed forces oversaw a peaceful transition.

2002: The coup and countercoup

On April 11, a large march organized by pro-business groups surrounded the presidential palace. Chávez ordered his supporters to use extreme measures to quell protestors, a call that rankled the armed forces ranks, whose upper echelons had long harbored grudges against the socialist leader. In a meeting in the middle of the night, three officers forced Chávez’s resignation and took him into custody. But the provisional government made some crucial missteps, like dissolving the Supreme Court and National Assembly and suspending the Constitution. Such moves caused several important generals to waver in their support of the coup—a hesitation pro-Chávez officials seized upon.

Just 48 hours later, a group of military loyalists—including Padrino—launched a countercoup and successfully reinstated Chávez to power, this time with the support of the fervently chavista lower classes. Back in power, Chávez purged disloyal officers from the military and consolidated his institutional support, later telling journalist Marta Harnecker, “Without any doubt, I overestimated the strength of a group of people whom I believed I knew well enough.”

Chávez promoted a “civil-military alliance” by both dispatching the military in humanitarian efforts and the creation of pro-government citizen community groups (often armed) known as colectivos, throughout his presidency until his death in 2013.

Maduro faces significant opposition from the public: his approval rating hovered at 23.3 percent in May per a Datanalisis poll, and a July 18 Venebarometro survey found that 88.4 percent of likely voters said they’d vote in the recall referendum.

But he’s also in danger of losing support from within his own party, especially from chavistas worried the president, three years into his six-year term, is damaging the legacy of the late Chávez. Longtime chavista diplomat Roy Chaderton said on July 10 that to be a chavista didn’t “necessarily” mean supporting Maduro. On July 18, a group of former Chávez ministers and officials came out in support of the recall referendum as well.

In late May, Maduro took part in two days of military exercises—the largest in the country’s history—designed to show the armed forces breadth of force.